UNA Almanac for 2018 dedicated to centennial of Ukrainian Revolution 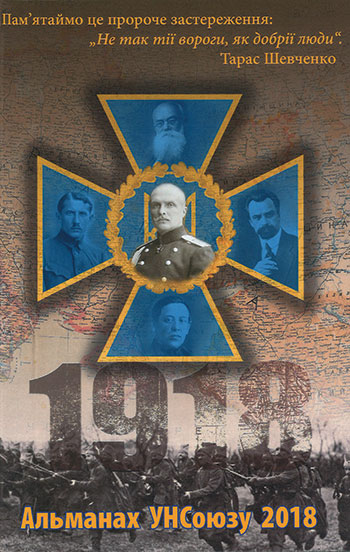 The Ukrainian-language volume’s editor is Petro Chasto, a longtime member of the Svoboda editorial staff who has been in charge of the successful Almanac projects since the year 2000, always finding fascinating topics and authors for readers’ enjoyment.

This year’s Almanac begins with a chronicle of the historic events of 1918. That is followed by an article about the momentous Battle of Kruty and poetry dedicated to the heroes of Kruty.

Other noteworthy articles focus on the Crimean campaign of the Ukrainian National Republic’s army and the biography of Hetman Pavlo Skoropadsky. There are excerpts from the memoirs of Dmytro Dontsov, a Ukrainian nationalist writer and political thinker (1883-1973). Mr. Chasto is the author of an article about the year 1918 on the pages of the Svoboda.

Other historic events whose anniversaries are noted in the 2018 Almanac include the 370th anniversary of Hetman Bohdan Khmelnytsky’s fight for the Ukrainian nation’s independence; the 170th of the “Spring of Nations” in the Austro-Hungarian Empire; the 100th of the November 1 Act in Halychyna; and the 310th of the massacre at Baturyn.

The 272-page Almanac also includes monthly religious calendars for 2018, in both Julian and Gregorian versions, as well as a section of interesting miscellany titled “Good to Know.”

The cover design is by Ihor Pylypchuk.

It is noteworthy that the Almanac is a fund-raiser for the Svoboda Press Fund. This year marks the 104th year that this annual volume has been released.