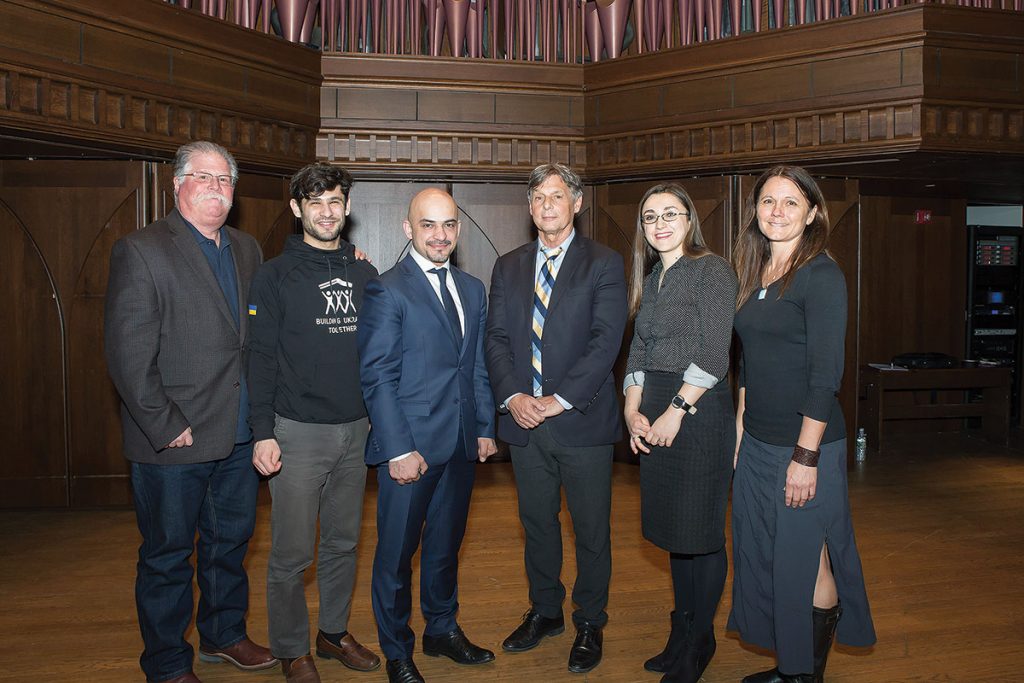 MIDDLETOWN, Conn. – Wesleyan University’s College of the Environment and Center for the Arts on Tuesday, February 20, hosted an in-depth panel discussing Ukraine’s resistance to tyranny and honoring the memory of those who perished on the Maidan (Independence Square) in Kyiv in 2014. Katja Kolcio, professor of dance and environmental studies, conceived and coordinated the multi-dimensional and provocative program.

The program, titled “This Side of the Curtain: Ukrainian Resistance in Uncertain Times,” began with a panel discussion that featured renowned investigative journalist Mustafa Nayyem, now a member of the Ukrainian Parliament, and public health expert Dr. Daniel Hryhorczuk of the University of Illinois-Chicago. The program also featured Yurko Didula, a young graduate of the Ukrainian Catholic University (UCU) who launched a campaign entitled Building Ukraine Together (Будуймо Україну Разом) that has mobilized hundreds of volunteers across Ukraine to rebuild homes in Sloviansk and Kramatorsk that were damaged in the fighting between Russian mercenaries and Ukrainian government forces.

The panel discussion was followed by a concert that included a diverse array of 40 performers, including bandurist Julian Kytasty of New York, the Yevshan Ukrainian Vocal Ensemble of Hartford, Conn., the Slavei Chorus, dancers and spoken word artists from the Wesleyan community.

The program drew a large audience of scholars and guests from across Connecticut, as well as Harvard University, the Greater Boston area, New Hampshire, Rhode Island and upstate New York.

The panel discussion started with an opening statement by Alexander Kuzma, chief development officer of the Ukrainian Catholic Education Foundation (UCEF), who reminded the audience that February 20 fell exactly four years to the day since the final day of the Maidan uprising that led to the shooting deaths of over 100 protesters – the Heavenly Hundred.

Mr. Kuzma gave a brief historic summary of Ukraine’s four non-violent revolutions – the Ukrainian Helsinki Group of the 1960s and 70s; the Rukh Movement of 1989-1991; the Orange Revolution of 2004 and the Euro-Maidan Revolution of Dignity of 2013-2014. He asked the audience to consider the courage it took for Ukrainians to defy the power of the Soviet State and the corrupt regime of Viktor Yanukovych and his oligarchs.

Moderator Dr. Olena Lennon, professor of political science at the University of New Haven, introduced Mr. Nayyem who gave a broad overview of the challenges facing Ukraine today, in the wake of Russia’s annexation of Crimea and its invasion of southeastern Ukraine.

Despite his frustration with the administration of President Petro Poroshenko and the slow pace of reforms, Mr. Nayyem acknowledged that significant progress has been made in building civil society, reforming local and national police forces, as well as health care reforms and educational reforms. Nonetheless, he lamented the lack of judicial reform and the failure of the administration to prosecute the most corrupt oligarchs and most egregious human rights violators from the previous administration.

Next Dr. Hryhorczuk, professor emeritus of environmental and occupational health sciences and epidemiology at the University of Illinois School of Public Health, shared his findings after conducting extensive research on the environmental and public health impact of the war in eastern Ukraine. He is now working with NATO to develop a research agenda for studying the environmental health consequences of the conflict in the Donbas.

Dr. Hryhorczuk presented a wide range of health risks stemming from unexploded ordnance, land mines, soil and water contamination, as well as the impact on the mental health of affected populations. He also outlined the massive impact on the region’s industrial infrastructure, and the health consequences of economic decline and widespread unemployment.

Mr. Didula explained his strategy for reviving community life in the cities of Kramatorsk and Sloviansk. As a graduate of the Ukrainian Catholic University, Mr. Didula and his classmates came to appreciate the value of extensive outreach between eastern and western Ukrainian students. As part of the “Easter Together” initiative launched by Bishop Borys Gudziak in 2011, UCU students developed strong friendships with students from Donetsk, Kharkiv, Dnipropetrovsk (now called Dnipro) and other eastern cities. After the start of the Maidan uprising, these contacts enabled students in many regions to dispel rumors, disinformation and negative stereotypes, and to build support and solidarity for the non-violent protests in Kyiv.

After Russian troops and separatists invaded eastern Ukraine, Mr. Didula organized a brigade of volunteers through the Lviv Educational Foundation (LEF) and began the process of rebuilding houses that were damaged in the fighting. Mr. Didula explained that in the past four years his network has grown to over 1,500 volunteers from across Ukraine. Beyond rebuilding 144 houses, Building Ukraine Together has launched informal educational youth hubs, “Freedom Houses” and community centers to help promote reconciliation among former separatists, ethnic Russians and Ukrainian loyalists.

In addition to their presentations at the February 20th forum, Mr. Didula and Dr. Hryhorczuk met with students in Wesleyan’s College of the Environment that will be traveling to Kyiv in March as part of an exchange program with the Institute for International Relations at Taras Shevchenko University – a partnership forged by Prof. Barry Chernoff, chair of environmental studies, and Prof. Kolcio in collaboration with Dr. Svitlana Adrushchenko of the Institute of International Relations.

Several days following the Wesleyan forum, the Hartford Courant published an extensive interview with Mr. Nayyem in which he shared his insights into the growing scandal surrounding Paul Manafort, Jr. the former campaign chair for Donald Trump, and former strategic adviser to the disgraced Mr. Yanukovych.

Mr. Nayyem told the Courant, America’s oldest continually published newspaper, that he had been interviewed by the FBI in its probe of Mr. Manafort and other Americans who had worked with Russian and Ukrainian oligarchs to promote anti-democratic policies.

“Of course, we talked about Manafort,’’ Mr. Nayyem told the Courant. “I didn’t have any kind of feelings that they were especially focused on Manafort. …It is not about Manafort only. No. It’s much, much bigger.’”

Misha Iakovenko is an international student from Ukraine at Wesleyan University.