Next Ukrainian Day advocacy event in Washington scheduled for July 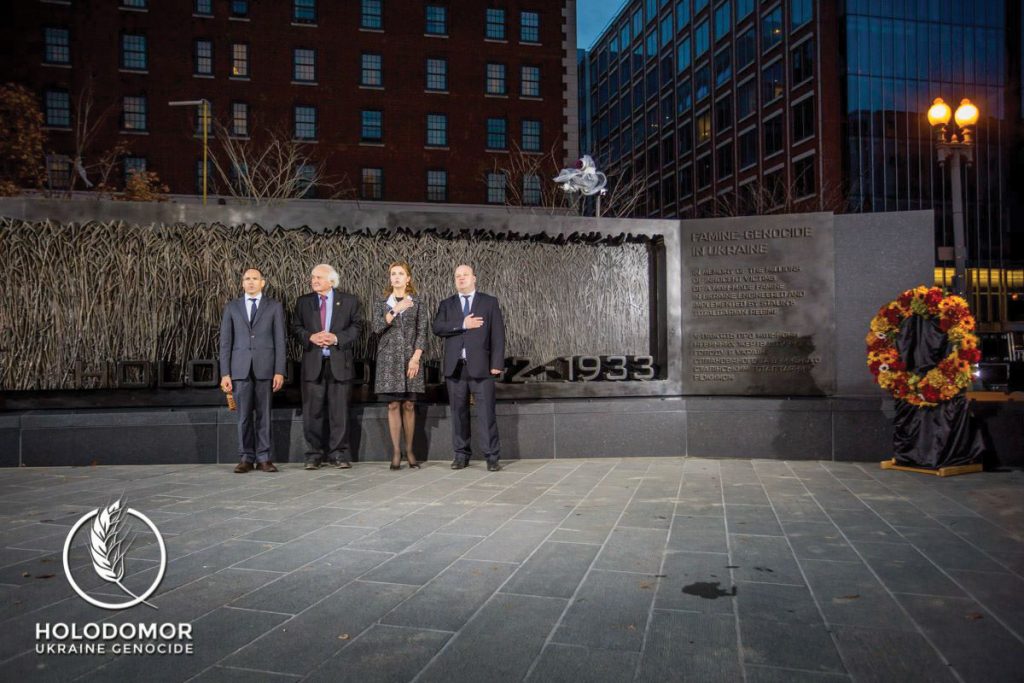 Courtesy of U.S. Holodomor Committee
At the dedication of the Holodomor Memorial on November 7, 2015 (from left) are: Michael Sawkiw, Jr., chairman of the U.S. Holodomor Committee and director of the Ukrainian National Information Service; Rep. Sander Levin (D- Mich.); Maryna Poroshenko, first lady of Ukraine; and Valeriy Chaly, Ukraine’s ambassador to the U.S. Rep. Levin will be honored during the July 18 Ukrainian Day in Washington.

Rep. Sander Levin to be honored

The previous event in March, brought dozens of participants to Washington to meet with government agencies, Ukrainian Embassy personnel, and non-governmental organizations (NGO’s) involved in formulating and monitoring U.S. policy toward Ukraine.

The July Ukrainian Day is especially critical considering that Ukraine will hold presidential and parliamentary elections in 2019, while fending off Russia’s ongoing illegal occupation of Crimea and the continued war being waged in eastern Ukraine. The summertime advocacy event will be used as an opportunity to encourage members of Congress to enhance support for a strong and vibrant civil society in Ukraine, as well as to promote military assistance to Ukraine to counter Russian aggression and preserve Ukraine’s territorial integrity and independence.

The highlight of the Ukrainian Day program will be an evening congressional reception honoring the work of retiring congressman Sander Levin. Rep. Sander Levin (D-Mich.) has served the people of the greater Detroit metropolitan area for 36 years in the U.S. House of Representatives. In that time, the congressman has been a staunch supporter of Ukrainian American issues and a sponsor of beneficial legislation. The congressman’s unwavering commitment to bringing about independence for Ukraine during the Cold War era and, since 1991, enhancing the bilateral relations between Ukraine and the United States, have earned him much respect in Washington and beyond.

A few of Rep. Levin’s milestones in his nearly four-decade congressional career include: formation of the Congressional Ukrainian Caucus in 1997 and co-chairmanship of the Congressional Ukrainian Caucus since its inception; statements in the House of Representatives observing Ukraine’s Independence Days (January 22nd/August 24th); sponsorship of legislation “graduating” Ukraine from the Jackson-Vanik amendment; introduction of several resolutions commemorating the Ukrainian Holodomor; petitions in defense of Ukrainian political prisoners and dissidents, and human rights in Ukraine; sponsorship of the Holodomor Memorial bill, testimony before relevant congressional committees and government agencies in support of its passage and attendance at the groundbreaking and dedication ceremonies; submission of letters to the House Foreign Operations Subcommittee of the Appropriations Committees in support of sustained levels of foreign assistance to Ukraine; hosting of working visits by Ukrainian government officials and NGO leaders; and more.

Further information about the July 18 Ukrainian Day will be posted on the UNIS Facebook page and the UCCA website, www.ucca.org.