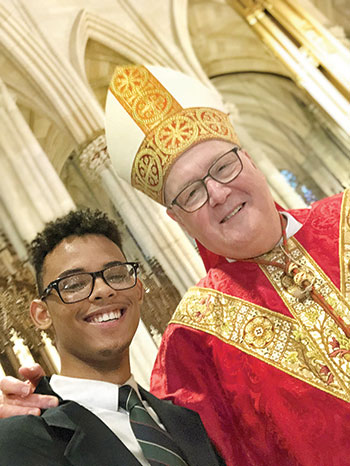 The liturgy was celebrated by Cardinal Timothy Michael Dolan, archbishop of NY. In attendance were over 1,000 12th graders from the city’s Catholic schools. Several weeks prior to the celebration, the Roman Catholic Archdiocese of New York informed St. George Academy that 12th grader Armany Torres had been selected as one of three students from all of the Catholic high schools to act as an altar-server for the liturgy.

Armany was thrilled to be selected for this opportunity. During the liturgy, he was at the cardinal’s side and held the Gospel during Cardinal Dolan’s reading. Armany has served as an altar server at St. George Ukrainian Catholic Church for the past three years.

During his homily, Cardinal Dolan’s message was simple: “…take your faith with you into your future and remember that you are part of the sacred family of Christs’ Church.”

SGA senior Lilya Dovhanyk appreciated the cardinal’s words: “I liked Cardinal Dolan’s address the most because he blessed us, and his words were very inspirational and warm.”

Oleksandra Roik, also an SGA senior, felt the mass was a unique and necessary experience for all 12th graders: “When you’re there, participating, you feel like part of one big senior family.”

Following the liturgy, Dr. Timothy McNif, superintendent of all Catholic schools, approached Principal Andrij Stasiw and thanked the students for their participation in the service.

All of the 12th graders were very moved by the Cardinal’s homily and the entire experience. “With the majestic cathedral as a backdrop, and the melodious sounds of full organ and choral music, it was a once-in-a-lifetime experience for the SGA Class of 2018,” said Mr. Stasiw.