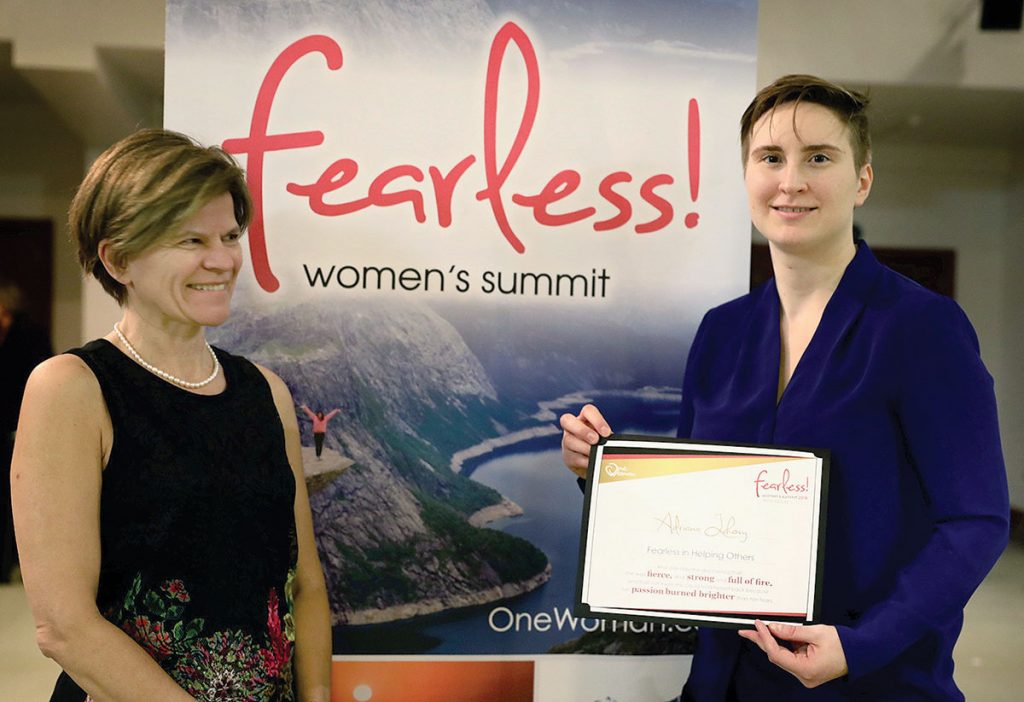 This screening was particularly special as both are graduates of Concordia University, Ms. Luhovy from Concordia’s Department of Communications Studies in media and cultural studies, and her father from the Department of Cinematography, when the university was called Sir George Williams (before the university’s expansion and amalgamation of two Montreal university campus).

The film showing on April 23 was opened by CUSU President Denis But, who introduced Ms. Luhovy. She welcomed the many friends in the audience, mentioned her pleasure to be back home on her university campus and thanked the community that supported the project.

In attendance were designer Don Royer, who helped with the “Recovery Room” booklet; Bernard Benninger of Montreal’s Fast Forward Studio, where recordings of the voice-overs were made; and Christine Mota, who encouraged the project.

Ms. Luhovy referred to her years as a member of the CUSU and the Ukrainian Canadian Students’ Union (SUSK) in Montreal.

Mr. Luhovy spoke about how proud he was to be back on his campus with a 40-year career in the film industry and as a collaborator with his daughter on “Recovery Room.”

An interview was conducted with Adriana Luhovy for an article about “Recovery Room” that appeared in Concordia University’s The Concordian, an independent university publication. The journal appeared online on April 19 and was later mailed as hard copy to Concordia alumni.

Two days prior to the screening, the “One Woman Fearless” award was presented to Ms. Luhovy, with an introduction by Sylvie Monette, at Concordia University’s 2018 Montreal’s Women’s Summit Conference. She was recognized for her work in serving and inspiring others.

“Recovery Room” was filmed at the Main Clinical Military Hospital in Kyiv. It is a story of hope, resilience and compassion during a time of war in eastern Ukraine. Ms. Luhovy was invited as photographer to be part of Canada’s Medical Missions, organized by Canada-Ukraine Foundation, through which humanitarian aid was provided to wounded soldiers by Canadian and Ukrainian medical teams.

Ms. Luhovy’s documentary continues to be shown in various cities. For information about “Recovery Room” see the website at: www.recoveryroomthemovie.com.