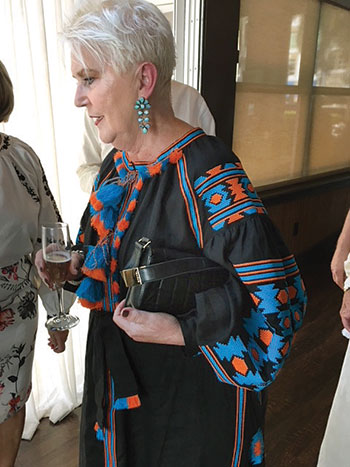 FORT LAUDERDALE, Fla. – Branch 17 of the Ukrainian National Women’s League of America (UNWLA) encompasses a diverse group of women who have come to Miami, Fort Lauderdale and their suburbs from all over the United States and Ukraine. They share a desire to assist Ukraine and preserve their heritage here in the United States. Among them are third-generation members like the Maksymowich families and Patty Krysa, who were born in the United States and carry on the work begun by their parents in our community.

On Sunday, April 29, Karyn Maksymowich-Wilk was the DJ of the branch’s “Vyshyvani Vechornytsi ,” while Hanya Maksymowich-Lotocky and Donna Maksymowich-Waskiewicz led the dancing and singing. It was wonderful to see so many on the dance floor and to hear Ukrainian melodies. The young performers of the Ukrainian Dancers of Miami had everyone applauding as they showed their talent.

Ms. Krysa was in charge of organizing the beautiful and bountiful items in the silent auction donated by members and friends. There were paintings, necklaces and embroideries, as well as the traditional baskets of cheer, all of which were scooped up by the attendees.

Members who are post World War II immigrants also play an important part in the branch. It was at Oresta Hamersky’s urging that the branch hold a fund-raiser at the elegant Grateful Palate in Fort Lauderdale. She chaired the committee that worked on making it a success.

Olya Sperkacz, who is originally from Chicago, is the branch’s president. She welcomed guests from other UNWLA branches in Florida, including Natalka Santarsiero, president of Naples Branch 136, who led a contingent to the event. Friends, many of whom are also members of UNWLA, came from Washington, D.C., Philadelphia and New York City. There are some members from the Fourth Wave, and the branch extended an invitation to them to become members.

Most of the attendees wore beautiful “vyshyvanky” (embroidered finery), and the difficult task of deciding whose were the best went to judges Martha Lewicky, Marta Legeckis and Col. Roman Andrejchyk, who concluded that Father Andrii Romankiv, pastor of Assumption of the Virgin Mary Greek Catholic Parish in Miami, had earned first prize in the men’s category for his embroidered shirt, which was created by his wife, Zoryanna.

Other winners included Sonya Lotocky, who was recognized for the “Best Overall Vyshvyanka.” Lida Bilynsky was awarded “Best Traditional Vyshyvanka,” while the prize for the “Best Modern Vyshyvanka” went to Natalka Bubanj.

UNWLA branches at large honored Tamara Huryn with a special certificate of recognition, for her many years of dedicated and charitable works for the organization.

The mistress of ceremonies, Oksana Piaseckyj, did an outstanding job leading the festivities and welcoming guests, including non-Ukrainian friends who attended. Close to 100 people came to celebrate and support the event, held on the Intercoastal Waterway in Fort Lauderdale.

The dinner menu centered on Chicken Kyiv and amazing desserts, like the rich tortes prepared by branch members. As the attendees danced the night away, luxury yachts passed and the water glistened under the moonlight. It was a memorable evening.

The UNWLA’s fund to aid families who are suffering from the ongoing war in Ukraine is the designated recipient of the proceeds of the silent auction and associated donations.