100 million victims of communism are remembered 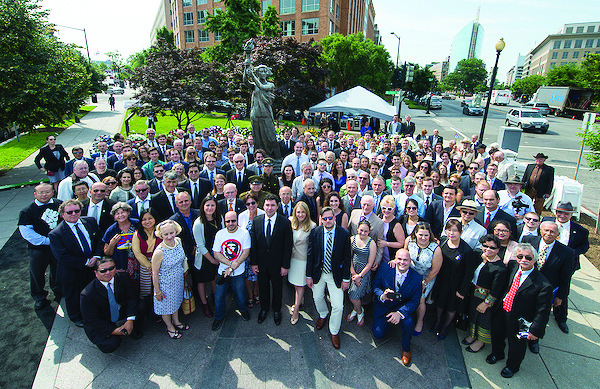 VOC
Participants of the 11th annual Roll Call of Nations wreath-laying ceremony at the Victims of Communism Memorial on Capitol Hill.

WASHINGTON – Sixteen embassies, four delegations and representatives from 39 ethnic and human rights organizations joined the Victims of Communism Memorial Foundation (VOC) on June 8 for the 11th annual Truman-Reagan Medal of Freedom and Roll Call of Nations wreath-laying ceremony at the Victims of Communism Memorial on Capitol Hill, which this year honored slain Cuban dissident and democracy advocate Oswaldo Payá.

Executive Director Marion Smith noted that, despite efforts by contemporary pundits and totalitarian regimes to rehabilitate the bloody ideas of Karl Marx, “the real legacy of Marxism is this ceremony. It is the dozens of countries represented here by those who will lay wreaths to commemorate the lives of those killed in some 40 communist countries since 1917.”

VOC Board Chairman Dr. Lee Edwards stated: “According to our YouGov survey, one-third of all Americans would prefer to live under socialism rather than capitalism.” He was referring to VOC’s “Annual Report on U.S. Attitudes Toward Socialism.” He went on to say: “Why? Is it due to idealism, the desire for a classless society in which everyone is equal and envy does not exist because everything is owned in common? Is it a lack of knowledge, sheer ignorance? When asked how many people have died under communism, less than one-third of Americans could provide the correct answer: over 100 million. Commented one millennial about his peers: ‘They haven’t seen socialism’s failures firsthand.’ ”

Almost six years ago, the people of Cuba lost Mr. Payá, the founder of the Movimiento Cristiano Liberación (MCL) and a 2002 laureate of the European Parliament’s Sakharov Prize for Freedom of Thought. He dedicated his life to peacefully opposing the authoritarian rule of the Communist Party of Cuba and advocating for pluralistic liberal democracy on an island that has languished under the iron fists of the Castro brothers for nearly half a century. Mr. Payá was murdered in a staged car accident in 2012.

But his daughter Rosa María Payá is continuing the vital work her father began. Her organization, Cuba Decide, is trying to organize a plebiscite calling for free elections with full political participation on the island.

VOC presented Mr. Payá with its Truman-Reagan Medal of Freedom, which was accepted by his wife, Ofelia Acevedo, and his daughter. The medal is awarded to those individuals and institutions who have demonstrated a lifelong commitment to freedom and democracy and opposition to communism and all other forms of tyranny.