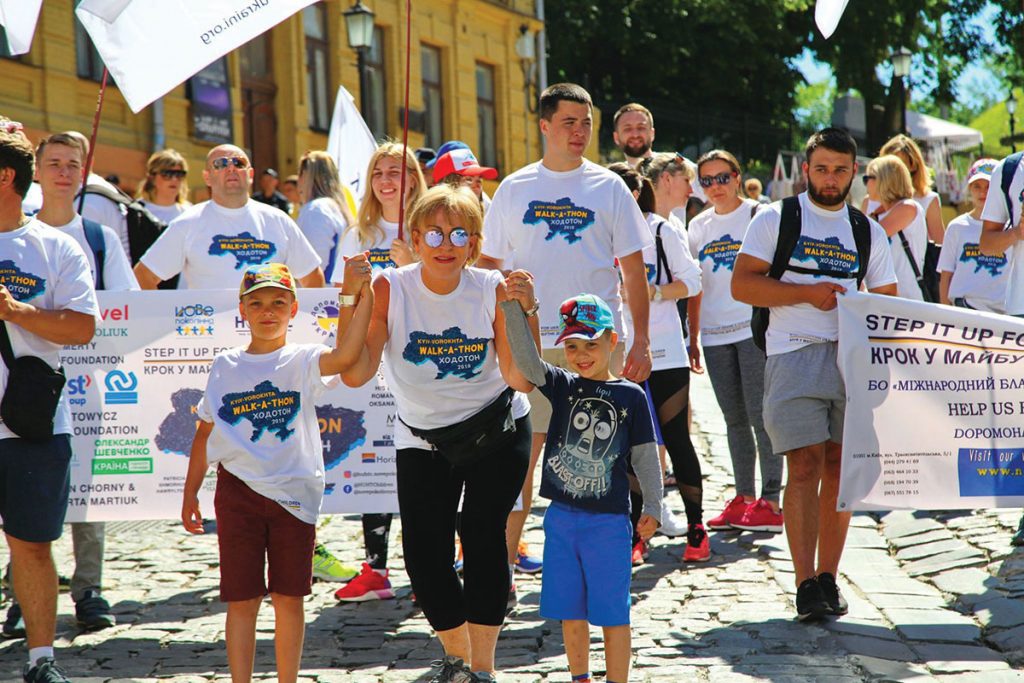 http://huhtc.org/
Ruslana Wrzesnewskyj of Toronto is seen on June 11 on the cobblestoned Andriyivskyi Uzviv in Ukraine’s capital as she begins a 650-kilometer trek from Kyiv to Vorokhta in the Carpathian Mountains to raise awareness about the plight of orphans in Ukraine.

KYIV – Ukrainian Canadian realtor and community activist Ruslana Wrzesnewskyj of Toronto has begun a 650-kilometer (404-mile) trek from Kyiv to the Carpathian Mountain town of Vorokhta in Ivano-Frankvisk Oblast in an effort to raise awareness about the plight of orphans in Ukraine. Her route ends in the area where she regularly holds camps for socially vulnerable and at-risk children.

As of June 21, she had hiked 74 kilometers and was in the Zhytomyr Oblast town of Popilne via the Kyiv Oblast towns of Vasylkiv, Fastiv, Olenivka and Kozhanka.

Advocating under the banner of Help us Help the Children, Ms. Wrzesnewskyi is marking the 25th anniversary of her endeavor to provide better lives for children who are orphaned or whose guardians were deprived of their parental rights. One of her daughters is an orphan from Lviv.

Since the Euro-Maidan revolution in 2014 and subsequent Russian invasion of Ukraine, she has included children whose parents have either suffered or perished in the conflicts at her summer and winter camps. Ms. Wrzesnewskyi, 64, has pushed the Ukrainian government to implement a child foster care system modeled after the Canadian one.

Only 10 to 20 percent of children at state care centers are actual orphans who’ve lost both parents. The majority are known as “state orphans” because their parents have lost guardianship rights due to alcohol or drug abuse or because they cannot afford to take care of them and only see their children on weekends.

Ms. Wrzesnewskyi’s walk-a-thon can be followed on http://huhtc.org/blog/, a site that is updated daily.