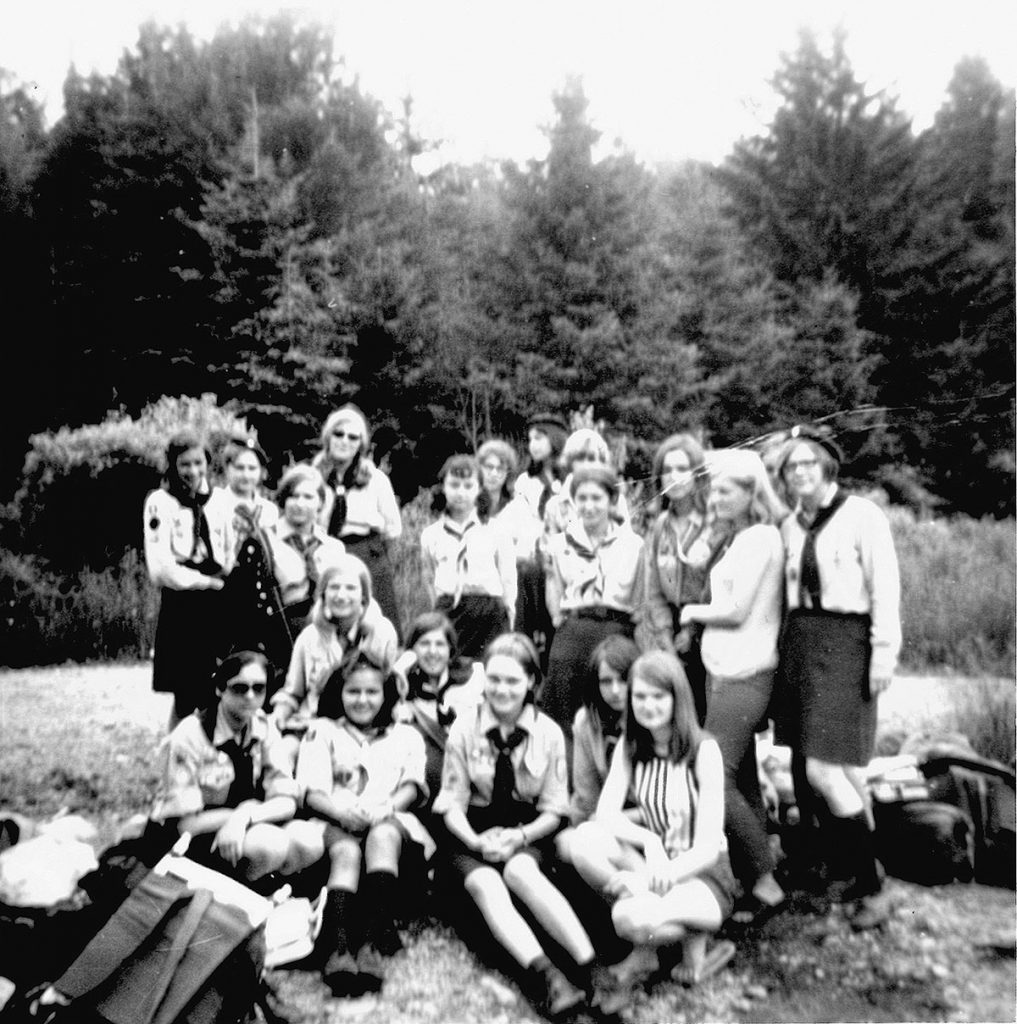 The senior Plast sorority group “Ті, Scho Hrebli Rvut” since its formation in 1927 has always focused on educational and training programs for women. This sorority organized the first camps and training sessions in Ukraine in the early 1920s at the Sokil campsite in the Carpathian mountains. Despite members moving to different countries after World War II, the momentum was still there. Plast leaders such as Tsiopa Paliyiv and others brought their ideas for leadership and training programs to North America and wanted to continue to pass this knowledge on to the next generation of leaders. Members of the “Hrebli” sorority in particular were instrumental in providing the initial structure and impetus for developing these counselor training camps.

After much thought, in 1968 the group organized the first Shkola Bulavnykh in Canada, at the Plast campsite Baturyn, under the direction of Tania Bojko Melnyk. The program was such a success that in 1969 the sorority decided to model the program based on a similar program already in existence for men, “Lisova Shkola.” Under the guidance of the program director, Dora Salaban-Horbachevsky, an extensive and intense core program was written and accepted by the world Plast governing body (HPB- Holovna Plastova Bulava).

In 1969, the new program was established and the next camp was held at Bobrivka in Connecticut, with Ms. Horbachevsky as komendant. Always by her side was Olha Kuzmowycz, from whom every counselor and trainee sought guidance and advice throughout the years until her death.

In 1971, Shkola Bulavnykh was able to relocate to a very secluded site in Hunter, N.Y., on the property of Mr. and Mrs. Teofil Kulyk. Participants had to hike a mile uphill to reach the campsite, but were rewarded with a beautiful view of the Catskills and a lovely river nearby. Those who had the pleasure of camping here have very fond memories of this site, and of the Kulyks, whom everyone regarded as their own guardians.

After several beautiful years here, Shkola Bulavnykh had to relocate and pitched camp at other official Plast properties such as Pysanyi Kamin and Vovcha Tropa, and twice set up camp in Alleghany State Park in Pennsylvania. But Hunter was always the very heart and soul of Shkola Bulavnykh.

By 1991, when Plast enjoyed its rebirth in Ukraine following the downfall of the Soviet Union, the international appeal of Shkola Bulavnykh grew even stronger. One of the biggest camps was organized during the summer of 1991; it was run by Julia Fedyk Szyszka. Several scouts from Ukraine were invited to come to Hunter for training, and were joined by Plast members from Argentina, Great Britain, Canada, the U.S. and Poland.

The current organizer of Shkola Bulavnykh in Ukraine, Natalia Litkovets, was one of the participants of the 1991 camp. Upon returning home, she and others committed themselves to starting their own camp, the first of which took place in 1993 with the help of Motria Kuzych and has continued throughout the years.

The Hrebli also found it important to diversify the camp’s organizers and invited other sororities to join a team to organize and run the training programs.

Good fortune blessed this training camp, when the New York City Plast Foundation gave permission for Shkola Bulavnykh to set up a permanent campsite in Hunter, on the same large piece of property that Lisova Shkola uses.

Shkola Bulavnykh now has two camp leadership programs – one for regular camp counselors and a more advanced program called “Vyshkil Bunchyzhykh,” – which is for camp organizers.

To commemorate its 50th year, this summer Shkola Bulavnykh is holding a camp led by many former campers, the higher-level instructors, and also an alumni camp for past attendees, no matter their age. Senior Plast members who were unable to attend this camp in their youth are also invited to attend the alumni camp and experience the training sessions. This year’s camp will be attended by 22 participants; the reunion camp now has over 12 registered.

Over the last 50 years Shkola Bulavnykh has trained over 463 women from all over the world.

To mark its 50th jubilee, there will be a banquet on June 30 on the grounds of St. John the Baptist Ukrainian Catholic Church in Lexington, N.Y., with a campfire nearby, hosted by Darka and Orest Temnycky.

Those interested in attending may contact Katria Kuzmowycz at shkolabulavnyhusa@gmail.com. Katria Kuzmowycz has been the main organizer as well as komendant of several of these leadership camps since 2009 – the third generation in the Kuzmowycz family to take on this role. Information can also be found on plastusa.org and on the Facebook page Школа Булавних США. You can also follow Shkola Bulavnykh on Instagram @shabeusa.