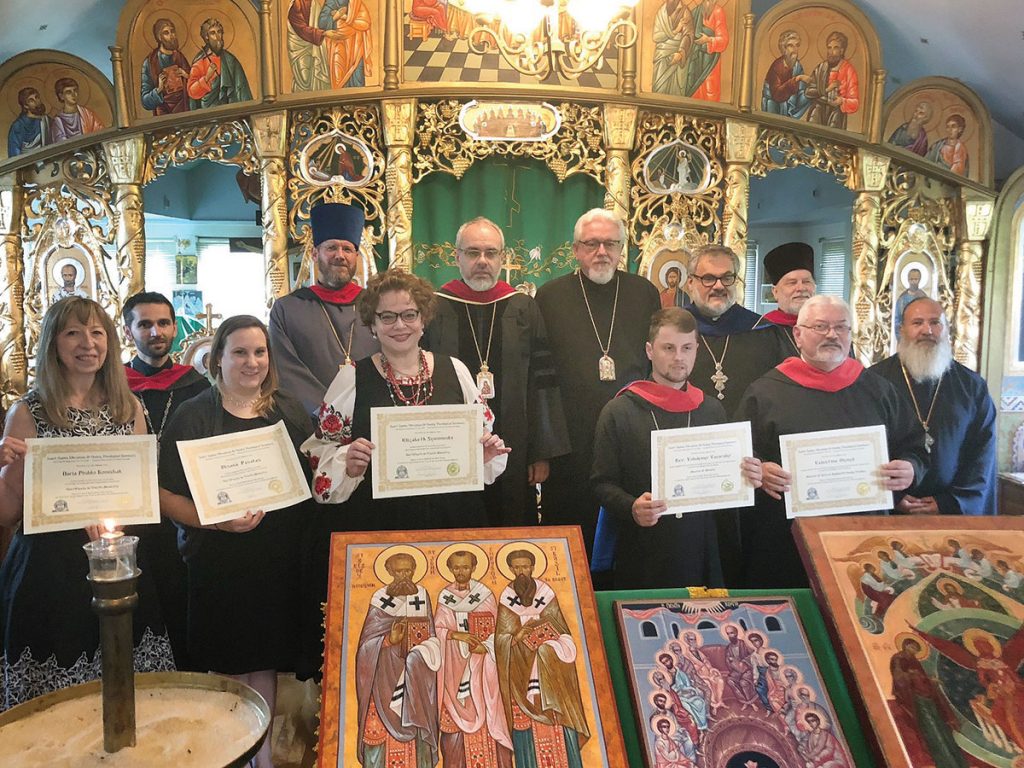 Metropolitan Antony, prime hierarch of the Ukrainian Orthodox Church of the U.S.A. and Diaspora, and seminary rector, and Archbishop Daniel, Consistory president, ruling hierarch of the Western Eparchy, and provost, academic dean and professor of pastoral theology and Ukrainian studies at the Seminary, were led in the academic procession by the seminary faculty, who were preceded by clergy, the current seminary students and the graduates.

All entered the Three Hierarchs Seminary Chapel for the moleben to Christ the Savior, where the faithful joined the clergy and seminarians in singing the responses.

After the moleben, the Very Rev. Anthony Perkins, vocation director, stepped up to the podium to welcome the guests and begin the commencement ceremony.

He introduced the newly ordained Rev. Volodymyr Yavorskyi, the recipient of the Degree of Master of Divinity and class valedictorian, who came up to say a few words. Father Volodymyr explained how beneficial seminary life was to his studies, as he received valuable knowledge, not only from professors and books, but from spending time and discussing topics with fellow seminarians and faculty members.

He concluded by thanking his bride, Ginny, and giving the remaining seminarians some advice: “Listen to the words of God, and the prayers which we pray daily. Try to enjoy as much as possible the life at the seminary and the company of all who surround you before you graduate.”

Next, Father Anthony introduced the recipient of the Degree of Master of Arts in Applied Orthodox Studies, Subdeacon Valentine Olynyk. Receiving the hierarch’s blessing, Subdeacon Valentine stepped up to the podium and told of how joining the seminary was a journey. His life was a series of phases, and he was glad that even though he is older than the typical seminarian, he had found his path. His father and grandfather had attended seminary, and he said he was proud to follow in their footsteps.

Father Anthony then called Elizabeth Symonenko, valedictorian of the graduating class of the Youth Ministry Program, to the podium. She spoke about the importance of teaching youth, and teaching them correctly, and concluded by asking the hierarchs and all those gathered to keep the educators of our youth in their prayers, so that the seeds they plant fall on fertile soil.

Following the speeches, degrees were conferred and diplomas were presented. In addition to the aforementioned, this year’s graduates included Subdeacon Clint Kifolo, who received a Diploma in Applied Orthodox Studies. Those who received certificates for completing the Youth Ministry Program were: Tracy Galla, Danielle Geeza, Anna Kobilaski, Daria Pishko Komichak, May Ost, Oksana Pasakas and Andrea Roelofs.

Having conferred the diplomas, Metropolitan Antony gave a few words charging the graduates with using their newly acquired knowledge to continue the work they had begun.

Archbishop Daniel expressed his gratitude, gave his blessing and assured the graduates of his prayers as they put to use what they have learned at the seminary.

After the benediction, the church exploded in resounding renditions of “Mnohaya Lita” for the graduates.

Prayers of remembrance were said for the late Father Bazyl Zaweirucha, who had taught many of the graduates.

All then gathered in the Seminary Dining Hall for a light repast and fellowship.

Source: Ukrainian Orthodox Church of the U.S.A., based on text by Elizabeth Symonenko. Photos by seminarian Yaroslav Bilohan and Ms. Symonenko.