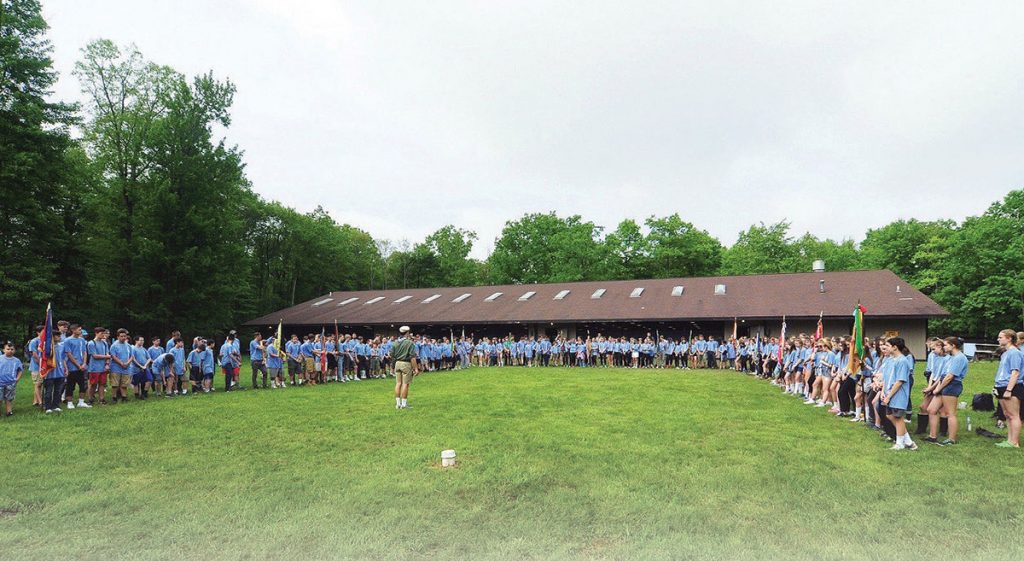 FARMINGTON, Pa. – A total of 214 Plast scouts, plus 39 counselors, chaperones and guests, participated in the annual “Sviato Vesny” camporee over Memorial Day weekend. The event was organized and held by Plast’s Chornomortsi fraternity and Chornomorski Khvyli sorority as part of the “Year of Sеа Scouting” commemorating the 100th anniversary of the creation of the Ukrainian Navy.

The traditional Plast celebration of spring this year was attended by scouts from the organization’s branches in Albany, New York, Yonkers, Rochester, Syracuse, and Kerhonkson, N.Y., Newark and Passaic, N.J., Boston, Detroit, Philadelphia, Chicago, Washington D.C., Cleveland, and other locations.

The theme for this year’s Sviato Vesny was “On the waves of the sea, toward a common goal!”; it was a significant part of the yearlong competition to celebrate the 100th anniversary of the historic day when sailors raised the flag of the Ukrainian state on ships of the Black Sea Fleet on April 29, 1918. In their respective branches, Plast scouts had an opportunity to earn a special sea scouting merit badge, which was divided into six themes: navigation, singing, knots, April 29 celebrations, types of ships  and practical sea scouting.

The scouts had been preparing for the Memorial Day weekend camporee since February. Every month, they studied and practiced aspects of sea scouting. At Sviato Vesny, their activities revolved around water-themed events, including canoeing and swimming. There were three field competitions among the individual chapters: sports events, a field game in which each chapter showcased its knowledge of maritime scouting, and a great race to retrieve and raise the Ukrainian naval flag.

The great race tested the scouts’ creativity with a scavenger hunt that led them to clues they had to decipher in order to locate the hidden flags. The exercise ultimately led them to paddle canoes over one mile to secure the flags.

Keeping the weekend’s programs to a schedule and maneuvering the various groups of youths throughout the weekend were just some of the responsibilities of the Sviato Vesny “first mate” (deputy commander) Alec Kuzyk of Philadelphia. This year’s program director, or admiral, was Damian Handzy from New Jersey, and the scribe was Roxy Kozyckyj from Chicago, all members of the Chornomortsi and Chornomorski Khvyli groups.

Throughout the day on Saturday, scouts participated in outdoor activities, many of which centered on water; in the evening the youths enjoyed a masquerade dance. The remainder of the weekend was filled with sing-alongs, games and challenges, and culminated in a Sunday night campfire, during which the individual chapters presented entertaining skits pertaining to the 2018 camporee’s theme.

Monday morning’s departures were sad for the scouts, but they were cheered by the thought of seeing each other soon at traditional Plast summer camps.

On June 15-17, a separate Sviato Vesny took place in the Pacific Northwest organized by the Seattle chapter. Over 40 participants, including scouts, their counselors, chaperones and guests, enjoyed the weekend at Howard Miller Steelhead Park in the Northern Cascades of Washington State.

Participants were mostly from the Seattle chapter, but guests included scouts from the Philadelphia and Passaic branches, as well as California. The older scouts participated in a whitewater rafting event down the Sauk River, while the younger scouts had a rafting float down the Skagit River.

There was also a large bonfire during which the scouts presented fun skits pertaining to the sea theme.