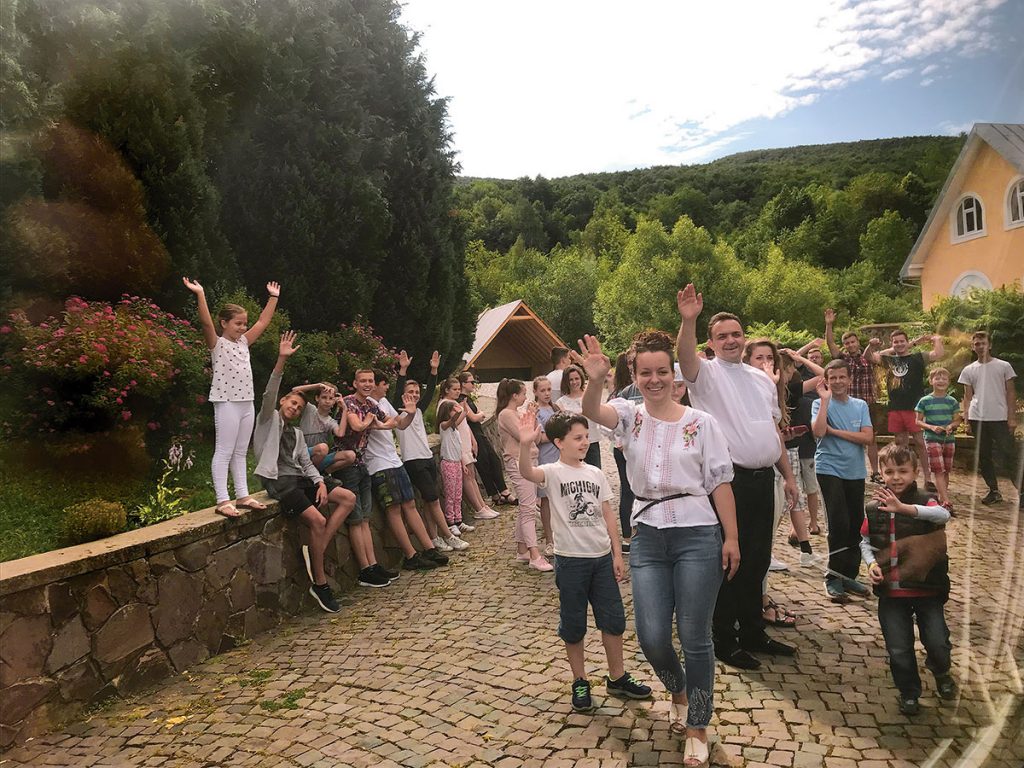 This year’s Basilian mission trip to Ukraine consisted of the most volunteers ever, as 14 people joined the Sisters of St. Basil the Great Basilian Volunteer Program to teach English to children and visit the needy in Ukraine.

The Drohobych camp was held at a newly built eparchial retreat center run by Zoryanna Dubravski. While in Drohobych, on May 27 to June 3 volunteers visited Bukovo Psychiatric Institution, a rehabilitation center and a homeless shelter, where they interacted with residents and distributed the gifts brought for the children and needy.

Our visit coincided with the 25th anniversary celebration of the Drohobych Eparchy. Patriarch Sviatoslav celebrated a pontifical divine liturgy and then, at the banquet, took time to pose for a picture with our volunteers.

Michael Haritan, our professional photographer volunteer, left us for Kyiv after the first week. His dream of filming the “Babas” of Chornobyl and the wounded soldiers of Ukraine finally materialized with Sister Dia, OSBM, and Father Yurij Lohoza as translator and guide.

On June 4-8, in Ivano-Frankivsk, we held an English day camp. Since the classes all finished by 1 p.m., we visited the Buchach House of Mercy, St. Nicholas Village, a halfway house, the Pohon Psychiatric Institution and made a call to Father Roman Mirchuk in Odesa.

On our one day off we took a sightseeing tour to the Yaremche and Bukovel area.

June 10-15 found us in Syniak, a retreat center near Mukachiv for the last English overnight camp. Teaching in the beautiful Carpathian Mountains was a pleasure. Father Vasyl Kopyn and his wife, Anhelina, were our local coordinators. On June 15 we returned to Lviv after tearful goodbyes to do some final shopping and visit the crypt at St. George Cathedral, where we prayed at the tomb of Metropolitan Andrey Sheptytsky for all our benefactors and friends.

“This mission trip would not have been possible without the help and support of all our benefactors and volunteers. The children and needy of Ukraine are grateful to all who supported us. May God bless you for your generosity,” Sister Ann commented.

Volunteers and local coordinators also weighed in about their experiences.

“Your presence was an incredible experience for the children: they could communicate with you in English and learn at the same time some American culture. The most inspirational thing for the children was your volunteering. You came for free, taught for free and spent your time with them. This example is most memorable to them and it impressed them. Thanks for the inspiration, you gave joy to the children and their parents. We also received very good reviews from the parents. Therefore, we look forward to seeing you next year,” said Sister Yermiya, OSBM, coordinator of Ivano-Frankivsk day camp.

“We appreciate all the work you have done. We appreciate every single day spending with your team. Team of professionals, team of great people, team with the same goal – to serve God and help people. …P.S. These days we have a camp where there are a lot of children from your camp. They remember all the songs, all the prayers!!! We are so happy! They ask when will you come again! They miss you! We do too! Hope to see you soon,” noted Ms. Dubravski, of the Drohobych resident camp.

Ms. Manasterski offered these observations: “This was my first visit to Ukraine, and it was an unforgettable one. I enjoyed meeting the people, seeing the beautiful countryside, and challenging myself to learn the Ukrainian language. I taught English grammar to small groups of children who were 7-16 years old. Sister Joann was the primary teacher, and I learned a lot about teaching from observing her. Most of the children were engaged and eager to learn English and about the American culture. …They were very entertained by our rudimentary Ukrainian language skills, and we laughed and learned together. They are very similar to kids in America, even though they live 6,000 miles away. I continue to maintain contact with some of the friends I made through social media, and I hope to return in the not-so-distant future.”

Mr. Shevchuk commented: “Ostensibly, we were going to Ukraine to teach – to teach the children some American English. While we did hopefully accomplish some or much of that, we probably came back having learned more than we taught. We learned how vibrant the life is in Ukraine, how religious the people there are; learned that there are wonderful religious and laity who provide for the many needy children where the government support falls short; learned how varied the divine liturgy is from one location to another, especially the different melodies and songs of the Transcarpathian region; the warmth and friendliness of the children and staff; and finally, learned that those of us who speak Ukrainian here in the states have a lot of catching up to do with the current Ukrainian vocabulary, picking up some new catchy words like ‘frikadel’ka’ (meatball). The opportunity to meet personally with our Patriarch Sviatoslav during a celebration in Drohobych was a real bonus.”

“For me, this experience was vital, fun, and long lasting… Vital because as Americans, Ukrainian Catholics, and adults, we were role models and example setters. Fun because in addition to the task we were undertaking, we had loads of laughs, sang plenty of songs, and ultimately bonded deeply in ways that don’t happen in just serious situations… And finally, long lasting in the sense that even after we left, relationships had been initiated and memories had been formed that transcend time/space and will last forever. …it’s my hope and desire to volunteer again next year and years after that, too. …I’d like it to become an annual event in my life,” were the words of Mr. Drost, the volunteer from Oregon.

A presentation of all the camps and orphanages visited is available upon request by calling or e-mailing Sister Ann at 412-260-1607 or srannl@aol.com.