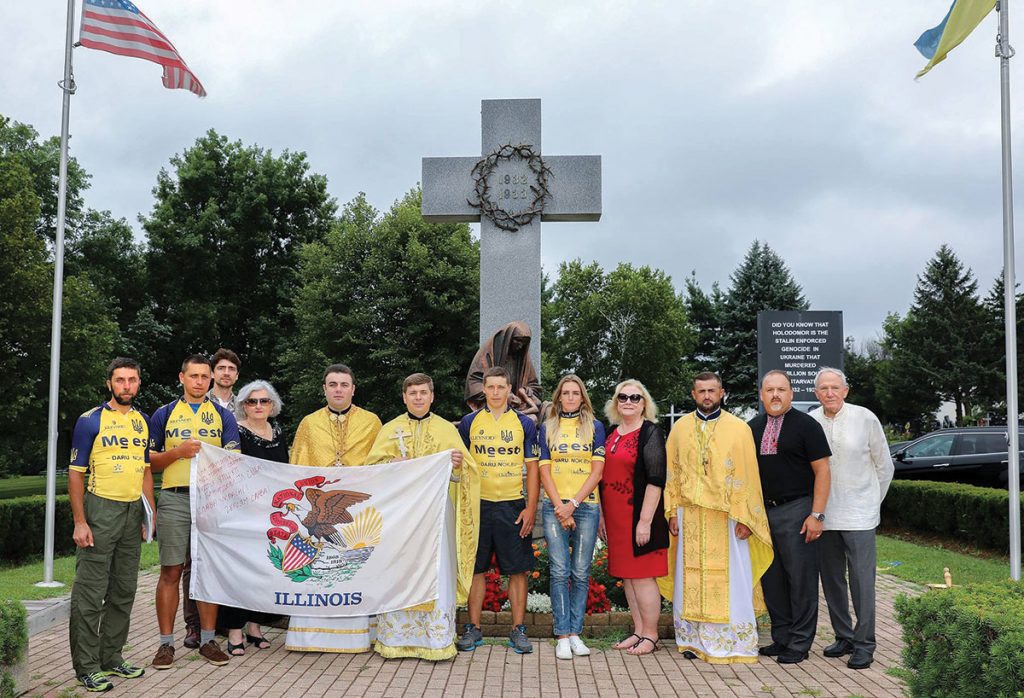 In Illinois, the team was sponsored by the Consulate General of Ukraine in Chicago with the support of the Ukrainian Congress Committee of America – Illinois Division and the Ukrainian organization Orange Wave.

These young cyclists, veterans of the ongoing war in Ukraine with Russia, have committed with determination to ride 10,000 kilometers (6,000 miles) and visit 400 towns in 100 days in North America. Their project began in May in Los Angeles. Their mission is to raise awareness in North America regarding the current state of affairs in Ukraine; to unite Ukrainians worldwide into a strong united force against Russian aggression; to present innovative cycling projects in Ukraine and promote these advances in North America; to raise funds in support of those impacted by the war in Ukraine. The cyclists are a member group of the Proidy-Svit Foundation.

Following Sunday liturgy, the Very Rev. Victor Poliarny, pastor of St. Andrew Ukrainian Orthodox Church and secretary of the Vicariate of the Ukrainian Orthodox Church – Kyivan Patriarchate in the United States and Canada, welcomed the team of cyclists on behalf of the parish. He expressed “sincere gratitude to you, who have been put in harm’s way to defend and assert the rights and freedom of Ukraine.”

Parish members and cyclists proceeded to the Heavenly Brigade Memorial and the Ukrainian Genocide Holodomor Memorial, where the Rev. Mychailo Leshchyshyn, assistant pastor, the Very Rev. Mykola Lypko and the Very Rev. Jaroslav Marikot officiated during prayers for the heroes who perished defending the sovereignty and territorial integrity of Ukraine and in memory of the 10 million victims of the Holodomor. Team members placed wreaths at both monuments in memory of the departed.

In a brief address, John Jaresko, president of the church board, welcomed the cyclists and commended them on their efforts to promote “humanitarian assistance and encouragement of patriotism in Ukraine and worldwide.” He thanked them for “spreading awareness of the needs of the internally displaced persons in eastern Ukraine at this time, when the world has forgotten about Ukraine and is focused on the meeting in Helsinki.” Mr. Jaresko presented the team with the flag of Illinois and a monetary gift from the parish.

Also, Nicholas Kocherha, president of the Ukrainian Genocide Foundation-U.S.A., greeted the guests, voicing the deepest respect for the team’s effort to serve as a valuable informational resource on internal affairs in Ukraine. Marie Slobidsky, secretary of the UGFF-U.S.A., presented the team with a monetary gift from the foundation so that they may continue to fulfill their mission’s objectives.

In addition, several members of Ukrainian American Veterans Post 32 expressed support for the team’s mission to raise awareness about issues related to Ukraine.

Mr. Samchuk, a member of the Chumak Way team, clarified the objectives of the project and offered “deepest gratitude to the Ukrainian diaspora for all of the moral and financial support in 2014 and since 2014.” Without it, he said, he “could not imagine how the Ukrainian nation could have survived the strains of aggression.”

Chumak Way team members participated in several meet-and-greet activities with members of the Ukrainian community and bicyclists from local bicycle clubs of Chicago and its suburbs on Friday and Saturday, July 20-21.

On Sunday, July 22, the team also scheduled a community meeting with members of St. Joseph the Betrothed Ukrainian Catholic Church in Chicago.