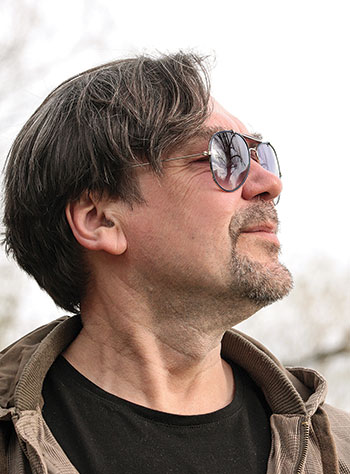 NEW YORK – The Ukrainian Studies Program at the Harriman Institute will be offering seven courses at Columbia University in the fall 2018 semester. The program will also organize several events focusing on reform in today’s Ukraine and will hold a meeting with prominent Ukrainian writer Yuri Andrukhovych.

Markian Dobczansky is a historian of the Soviet Union who will be a post-doctoral fellow in Ukrainian studies at the Harriman Institute of Columbia University for the second year of his two-year appointment, which is generously supported by the Petro Jacyk Fund. Dr. Dobczansky’s specializations include Russian-Ukrainian relations, nationalism, the politics of culture and urban history.

This fall he will teach a course titled “Eurasian Urbanisms: From the Imperial to the Post-Soviet” (Wednesdays, 4:10-6 p.m.). This course explores the institution of the city across Eurasia from the 19th century to the present. Before World War I, rapid urbanization began to significantly alter how the Russian Empire was run, how its economy functioned and how its various peoples interacted. With the rise of Soviet socialism, the “socialist city” became an object of intense discussions, while experimental architecture, massive public works projects and the Soviet forced labor economy changed the face of cities across Eurasia. The Cold War ushered in a new era of state-sponsored nuclear research, competition over consumer goods and a new Soviet role in the so-called Third World. Finally, with the collapse of Soviet socialism, cities were simultaneously nationalized and globalized.

On Wednesdays at 2:10-4 p.m., Prof. Alexander Motyl will teach “Ukraine in New York,” a course that offers a multidisciplinary exploration of the Ukrainian American community in New York City from its beginning in the late 19th century to the present. The course focuses on the history, demographics, economics, politics, religion, education and culture of the community, devoting particular attention to the impact thereon of the New York setting, shifting attitudes towards American politics and culture and homeland politics and culture, the tensions encountered in navigating between America, Soviet Ukraine and independent Ukraine.

Ambassador Valeriy Kuchynskyi will teach a course titled “Ukrainian Foreign Policy: Russia, Europe and the U.S.,” which will be held on Tuesdays at 2:10-4 p.m. The course examines the political crisis in Ukraine and looks at how Moscow has challenged the basic principles of international law, numerous bilateral agreements and how Moscow threatens global peace and security. It considers whether there is anything the world community can do to stop the aggressor and whether diplomacy can still play a role. These and other issues are dealt with in a newly revised course, delivered by a career diplomat. The instructor will share his own diplomatic experience, trace the trajectory of Ukraine’s foreign policy and analyze the current international crisis.

Dr. Yuri Shevchuk (Department of Slavic Languages and Literatures) will teach the course “Soviet, Post-Soviet, Colonial and Post-Colonial Cinema.” The course will discuss how filmmaking has been used as an instrument of power and imperial domination in the Soviet Union, as well as in the post-Soviet space since 1991. A body of select films by Soviet and post-Soviet directors which exemplify the function of filmmaking as a tool of appropriation of the colonized, and their cultural and political subordination by the Soviet center, will be examined in terms of post-colonial theories.

The course will focus both on Russian cinema and on often overlooked work of Ukrainian, Georgian, Belarusian, Armenian, etc. national film schools and will examine how they participated in the Communist project of fostering a “new historic community of the Soviet people” as well as resisted it by generating, in hidden and, since 1991, overt and increasingly assertive ways, their own counter-narratives. Close attention will be paid to the new Russian film as it re-invents itself within the post-Soviet imperial momentum projected on the former Soviet colonies. This course will meet on Tuesdays at 6:10-10 p.m.

Several events have already been scheduled for the fall semester. On September 25 at 4 p.m., Volodymyr Kulyk (head research fellow at the Institute of Political and Ethnic Studies, National Academy of Sciences of Ukraine) will deliver a talk titled “Language Politics and International Relations: A Controversy over the New Ukrainian Education Law.” On October 16 at noon, Sergei Zhuk (professor of history, Ball State University) will present his latest publication, the monograph “Soviet Americana: The Cultural History of Russian and Ukrainian Americanists” (London and New York: I.B. Tauris, 2018). At noon on November 1, Bohdan Vitvitsky (former special advisor to the prosecutor general of Ukraine and a former assistant U.S. attorney) will give a talk titled “The Rule of Law, Corruption and Ukraine.” All three of these events will take place in the Marshall D. Schulman Room (1219 International Affairs Building).

On November 13, writer Yuri Andrukhovych will present his recent publication of essays in English translation “My Final Territory: Selected Essays” (University of Toronto Press, 2018) together with one of the volume’s translators, Mark Andryczyk. This event will take place at 7 p.m. in the Harriman Atrium, 12th floor, International Affairs Building.

Dr. Shevchuk, who is also director of the Ukrainian Film Club of Columbia University, will continue to provide fans of film with consistent programming featuring Ukrainian cinema, both on and off campus, this fall.

Courses at Columbia are open to students from other universities in the New York metropolitan area seeking credit. Readers are advised to contact the university at which they are enrolled to determine whether it participates in this manner with Columbia University. Some courses are also open to outside individuals interested in non-credit continuing studies. Additionally, through the Lifelong Learners program, individuals over age 65 who are interested in auditing courses may enroll at a discount rate as Lifelong Learners. Please visit the Columbia University School of Continuing Education (http://www.ce.columbia.edu/auditing/?PID=28) for more details.

September 4 is the first day of classes, and September 14 is the final day to register for a class. For more information about courses or the Ukrainian Studies Program at Columbia University, readers may contact Dr. Mark Andryczyk at ukrainianstudies@columbia.edu or 212-854-4697.