Convention of International Association for the Humanities provides opportunity for dialogue 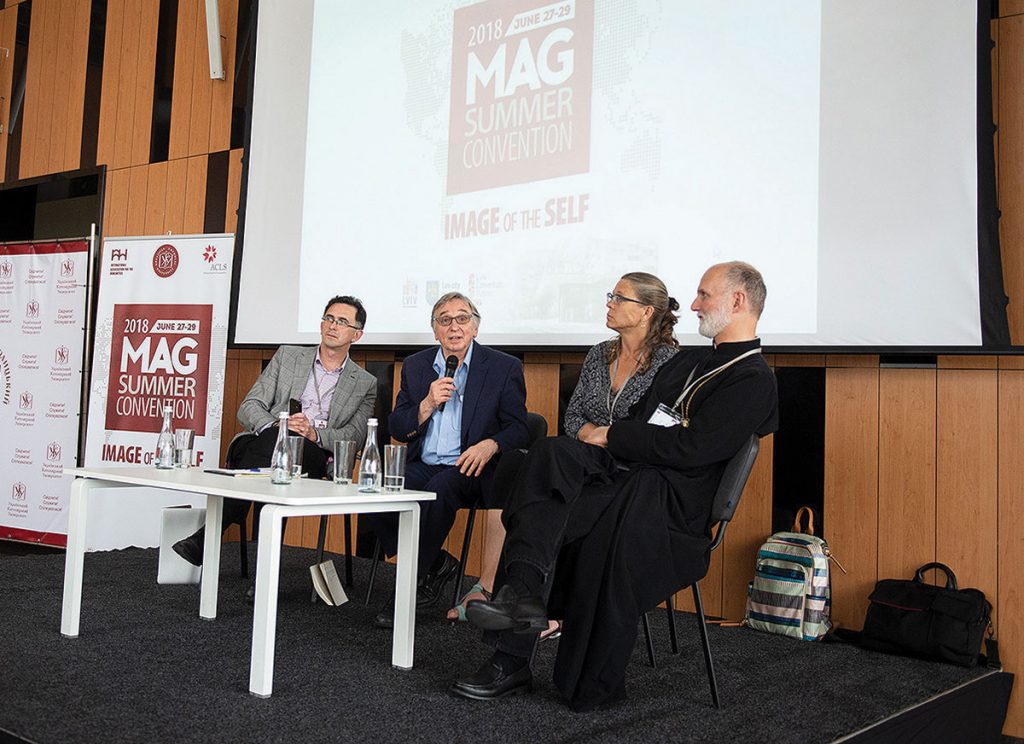 LVIV – The 2018 convention of the International Association for the Humanities (IAH), which was held here at the Ukrainian Catholic University on June 27-29, gathered 390 scholars from 30 countries. Most of the participants came from various parts of Ukraine, Russia and Belarus, so the majority of themes discussed involved the area of Eastern Europe.

Over three days, 120 panels and 350 presentations were conducted. This year’s theme, “Image of the Self,” was a continuation of “Image of the Other,” which was discussed at the joint convention of the Association for Slavic, East European and Eurasian Studies (ASEEES) and the IAH held on July 26-28, 2016.

UCU Rector Father Bohdan Prach gave an introductory speech to the attendees, emphasizing the uniqueness and importance of the IAH convention, and Andrzej Tymowski, director of international programs of the American Council of Learned Societies and head of the committee of the ASEEES-IAH 2016 Summer Convention, thanked all the organizers, volunteers and UCU, which, as Dr.  Tymowski said, “opened its doors and heart.”

Dr. Tymowski continued: “A year ago, after a discussion with the head of ASEEES, the question arose of where to conduct the next convention. Finally, we decided that there’s only one place where we can optimally realize this project, and that’s UCU, in the city of Lviv. There’s a great base here for the high-quality organization of such events and there are responsible people.”

“The fact that IAH is here is also a definite gesture of solidarity with Ukraine, a country in which a war is going on and which is combating social and economic problems,” he said. “It’s very important that there are Russian colleagues at the congress, who travel here as friends, as professional researchers, and this is a kind of model for how social discussions should happen. A ‘green light’ for arguments, but not hostility.”

Bill Rosenberg, professor of modern Russian history at the University of Michigan and former president of the ASEEES, also emphasized the importance of the city and site of the conference.

“The first time I visited Lviv, it seemed to me to be an environment of instability and crisis. But now I notice that Lviv is gradually becoming a place of optimism and growth, especially UCU. I have been at this university more than once, and am simply impressed by the progress that’s happened in recent years,” said Prof. Rosenberg.

“I’ve also spoken with many participants, and I am exceptionally pleased with this atmosphere of lively discussion and cooperation, for we all need a model of communication like this, and so conferences like this will be very necessary in the future,” he added.

During the three days of the congress, there were a number of panel discussions and informal talks about history, culture and sociology. Between panels, there were opportunities to chat with conference participants.

This was also not the first time at IAH for Marta Kolomayets, director of the Fulbright Program in Ukraine and a frequent guest of UCU. Ms. Kolomayets said she was most impressed by the opportunities at such events for dialogue among various people.

“Conferences like IAH, which look not at institutions but at individuals, exist thanks to mutual understanding,” she said. “Here, through acquaintanceships and dialogue, scholars better understand not only themselves but also other societies, their cultures, and they share this understanding with others. In perspective, this will definitely help the country’s development.”

Oleh Turiy, UCU’s vice-rector for external affairs and one of the conference’s organizers, spoke about understanding one another. He recounted how a number of participants from Russia and Belarus came up to him, saying: We travelled here to you with some fear that this was a kind of attempt to revive the Soviet past. But what we saw here impressed us. This is truly a very important, unbiased and necessary activity.

“By coming here, a person from Russia or Belarus has already expressed his or her position regarding dialogue, and we understand that these are like-minded people. Even if we can disagree on some scholarly themes, we nevertheless share the main values that indicate our perception of important phenomena,” he commented.

Dr. Turiy’s words were confirmed by a scholar from Polissia State University in Belarus, Oleksii Lastovskyi: “Today in our area aggression exists. The language of hatred, disinformation, an information war are being spread… Congresses like IAH, which is called to build bridges, are an important forum for communication and attempts to understand others.”

“The most important thing at IAH is human relations,” said Prof. Yaroslav Hrytsak of UCU. “The scholarly level of the conference is also very important. But what most marks the character of the conference is those whom you meet, that is, what happens at break time, before the conference, after the conference. That’s when you ‘share blood,’ because young people from various countries get an opportunity to enter a scholarly environment. But none of this would be possible without a place. That is, no less important for IAH than the intercultural element is the event’s Lviv context. We understand that if the conference is in Lviv, at UCU, then almost everyone will come, because they know that it will be well organized.”