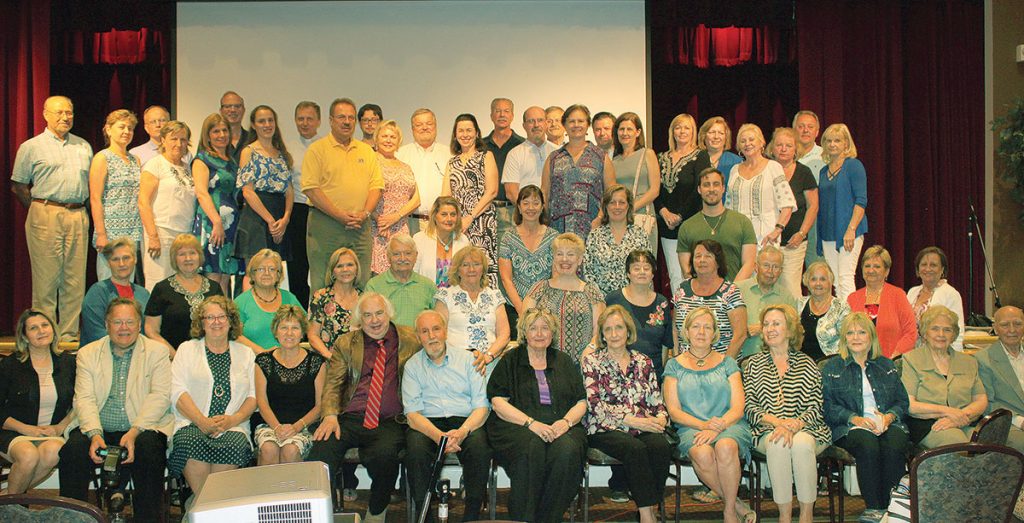 Myron Krywulych
Some of the large audience that attended the Whippany, N.J., screening of Adriana Luhovy’s film “Recovery Room.”

WHIPPANY, N.J. – The brutal impact of the Russian invasion and ongoing war in Ukraine were exposed in a very personal way to the audience at the recent screening of the documentary film “Recovery Room” at the Ukrainian American Cultural Center of New Jersey in Whippany. The event was sponsored and hosted by Ukrainian National Women’s League of America Branch 75.

Unable to attend the June 29 event, director Adriana Luhovy had producer Zoriana Hrycenko – who happens to be her mother– read a letter to the attendees, dedicating the night to Markian Paslawsky, the only American soldiers killed during the four-and-a-half-year war in eastern Ukraine. Paslawsky family members, as well as area friends, were in attendance at the screening.

Yurij Luhovy, Adriana Luhovy’s father and the film’s producer and editor, spoke about the making of the documentary.

In 2015, Ms. Luhovy was invited by the Canada Ukraine Foundation to join the Canadian Medical Mission as photographer of their efforts. This volunteer team of plastic surgeons and medical professionals, working at the Main Military Clinical Hospital in Kyiv, performed complicated surgeries on brave soldiers with horrendous injuries. As Ms. Luhovy began taking still photos, she became convinced that she was witnessing a story that needed to be told to the world. This gave her the impetus to begin filming and interviewing the returning soldiers, as well as the medical personnel trying to make a difference in their lives.

Prior to leaving for this assignment in Ukraine, Ms. Luhovy had been completing a program at the School of Visual Arts in New York City. While there she visited the renowned Ukrainian Museum located in the East Village and viewed the uniform of Markian Paslawsky whom the director knew as “Franko,” his nom de guerre, having seen an interview with Paslawsky via the news website VOX.com. Her film assignment would lead to a deeper understanding of the character of this brave Ukrainian American who gave his life for his ancestral homeland.

While she was interviewing and filming wounded soldiers at the hospital, one soldier told Ms. Luhovy of fighting alongside an American, whom he referred to as Franko, when they were hit by a Russian grenade. Although the soldier lost an eye and suffered severe shrapnel wounds, he knew that his life was saved because the American soldier had taken the brunt of the fatal impact. Realizing the significance of meeting this particular soldier who had witnessed the final moments of Franko’s life, Ms. Luhovy told him about seeing his uniform in New York. At this moment both the director and the wounded soldier were overcome with emotion, and it became one of the defining moments of the documentary.

The subdued but enthusiastic applause at the end of the film served to illustrate the sobering reality of the ongoing war and its impact on Ukraine and the diaspora. The sizable audience all had a very real connection to the late Markian Paslawsky through family connections, friendship or community. Ms. Luhovy honored his memory, as well as made a film that will help to reveal to the free world the moral bankruptcy of Vladimir Putin’s Russia and the bravery of Ukraine’s heroes.