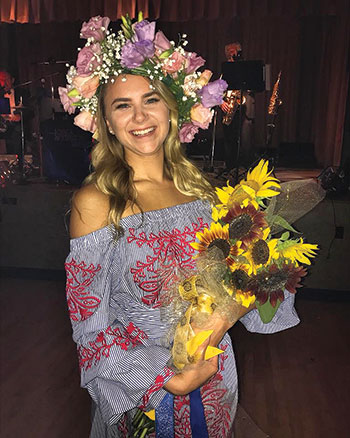 KERHONKSON, N.Y. – On a rainy Saturday night at Soyuzivka Heritage Center, a new Miss Soyuzivka beamed with pride as she proudly wore her vinok (Ukrainian headdress of flowers) and posed for photos to the sound of thunderous applause inside the grand Veselka Hall. As the Tempo Orchestra played a victorious waltz, Anastasiya Kaspruk became Miss Soyuzivka 2019 on August 11.

A pharmacy student at Duquesne University, Ms. Kaspruk was born in Ivano-Frankivsk, Ukraine, to Svitozar and Lyubov Kaspruk. She now lives in Colonia, N.J. Ms. Kaspruk has been at Soyuzivka for several weeks as a camp counselor at the Roma Pryma Bohachevska Dance Camp at Soyuzivka.

During the Miss Soyuzivka candidates’ interview process, Ms. Kaspruk confided to the judges: “Soyuzivka is my heart. I don’t know who I am without Soyuzivka.”

The first runner-up was Alexandra Lemekha of Stamford, Conn. The daughter of Sandra and Volodko Lemekha, she is an accounting major at Western New England University in Massachusetts, where she is also a member of the women’s soccer team.

Ms. Lemekha has a long history at Soyuzivka, and her grandmother and mother both worked there. She has attended camps at Soyuzivka, has been a camp counselor at Discovery and Heritage camps, has worked as a lifeguard at Soyuzivka’s pool, and has helped manage in the snack bar.

Ms. Lemekha recalled in her interview with judges that her parents first brought her to Soyuzivka when she was only a few months old; she underlined that Soyuzivka is a special place for her like no other.

Olena Hrynovets, the second runner-up, is from Ellenville, N.Y. She is a theater major at Ulster County Community College in Stone Ridge, N.Y., has participated in numerous plays, musicals and choral productions in school, and aspires to work for Disney as a voice actor for characters in animated movies.

The daughter of Hryts and Nadia Hrynovets, she is active in raising awareness about Ukraine among her American friends. Ms. Hrynovets currently is an employee at Soyuzivka. She has attended camp at the heritage center as well.

The coordinator of the Miss Soyuzivka contest was Stephanie Hawryluk, a longtime secretary of UNA Branch 88 in Kerhonkson, N.Y., and a former advisor on the UNA General Assembly.

Manager Nestor Paslawsky danced with the newly selected Miss Soyuzivka, while Mr. Drabyk and Roman Hawryluk, Ukrainian National Foundation board member, took a whirl around the dance floor with the two runners-up.

The girls received monetary scholarships, bouquets of sunflowers (selected in memory of Sonia Semanyszyn, former longtime office manager of Soyuzivka) and floral crowns as winners of the contest.

The evening continued to the tunes of Tempo, including a jubilant “Kolomyika.”