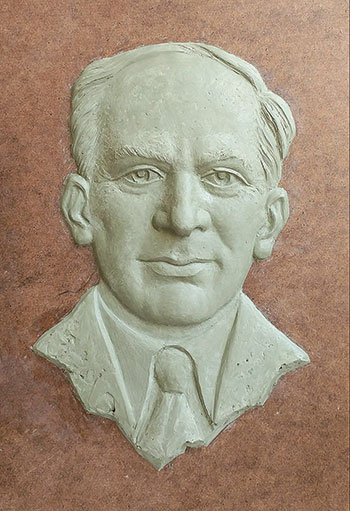 NEW YORK – On Thursday, September 20, at 11 a.m., the Ukrainian Institute of America and the Ukrainian Canadian Civil Liberties Foundation will unveil a multilingual – English, Ukrainian, Hebrew, Yiddish – plaque at the UIA honoring Dr. Raphael Lemkin, the “father of the U.N. Genocide Convention,” specifically in reference to the speech he gave in New York City (September 20, 1953) describing the Famine of 1932-1933 on Ukrainian lands as a Soviet genocide.

Prof. Lemkin, of Polish Jewish descent, was born in what is now Belarus. His early life was marked by tragedy as his family was forced off their land during World War I, but this perhaps sparked his lifelong interest in what he termed “crime against international law. ”

Lemkin is credited with coining the term “genocide” in his studies of “Crimes of Barbarity.” Ultimately, this led to his presentation in 1948 at the United Nations General Assembly that called for the adoption of a resolution and the establishment of a “Convention for the Prevention and Punishment for the Crime of Genocide.”

Lemkin studied other crimes against humanity, such as the Ottoman attacks against the Armenians, anti-Semitic pogroms and other group-targeted violence. He succeeded in introducing the term “genocide” in the indictment against the Nazi leadership as a member of the American team working on the Nuremberg trials. He wrote and lectured extensively on the Holocaust and the Holodomor.

Lemkin’s work highlighting crimes perpetrated against a captive people for the purpose of extermination and with supposed legal justification should not be forgotten, say the organizers of the plaque unveiling. In fact, it is ever more poignant now as we continue to witness new human rights violations in the world today.

The event’s organizers are: the Ukrainian Institute of America, the Ukrainian Canadian Civil Liberties Foundation, and Lubomyr Luciuk, Ph.D., professor in the Department of Politics and Economics at the Royal Military College of Canada in Kingston, Ontario.