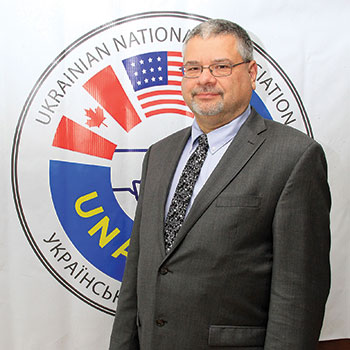 PARSIPPANY, N.J. – The Ukrainian National Association formally introduces its new national organizer, Myron Kolinsky, whose longtime work experience in various positions for numerous credit union associations in Connecticut has helped him gain a comprehensive knowledge base and skills set. A licensed professional insurance agent, he officially took on his new responsibilities on July 2.

Mr. Kolinsky, who resides in Wethersfield, Conn., holds a Master of Business Administration degree in management from the University of Connecticut. He earned a B.S. in finance from the same institution. He is a longtime member of UNA Branch 277 and serves as Connecticut District Committee chair.

Mr. Kolinsky is a member of the Ukrainian American Youth Association in Hartford, Conn., where he has served as its president (1983-2014) and as its treasurer. He is vice-president of the Ukrainian National Home of Hartford, where he previously served as public relations director, Grievance Committee chairman and rental chairman/organizational director.

He also donates his time and energy to the United Way, March of Dimes and efforts to combat juvenile diabetes.