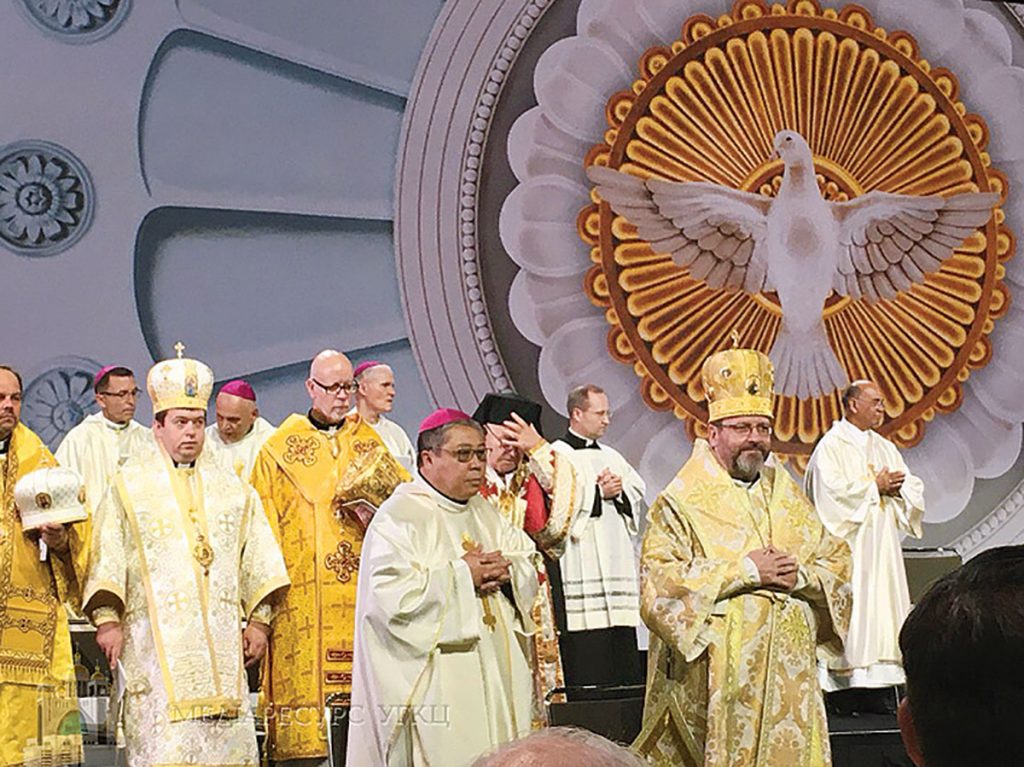 risu.org.ua
Patriarch Sviatoslav (front) of the Ukrainian Greek-Catholic Church during the mass at the opening of the Knights of Columbus convention in Baltimore.

Calls on world not to forget war in Ukraine

BALTIMORE – The patriarch of the Ukrainian Greek-Catholic Church (UGCC) on August 7 addressed participants of the 136th Convention of the Knights of Columbus, which involves representatives from different countries of the world.

The hierarch urged the international community not to leave Ukraine alone with the enemy and reminded his international audience about the Ukrainian political prisoners held in Russian prisons, reported the Department of Information of the UGCC.

“Although we do not have the exact number, we know that about 100 prisoners, including political prisoners, are still held in Russian prisons and are denied fair and transparent trials. The most famous of these prisoners, Ukrainian film director Oleh Sentsov, has been starving for almost 80 days, demanding from the Russian authorities the release of all illegally imprisoned political prisoners,” said Patriarch Sviatoslav in his keynote address.

He noted that Mr. Sentsov, an outright opponent of Russia’s occupation of the Crimean peninsula, is serving 20 years of imprisonment. He was sentenced for allegedly planning terrorist acts – charges he vehemently denies. Most of the global community supports Mr. Sentsov, the patriarch added.

In addition, Patriarch Sviatoslav expressed regret that the war in Ukraine has become “quiet and forgotten.”

“The war, in fact, has already caused the greatest humanitarian crisis on the European continent after the end of the second world war. …Since this is a ‘frozen conflict,’ nobody speaks out about the war in Ukraine any longer. The attention of the media has been shifted, as it often happens, to other conflict zones in the world,” he explained.

He said that many experts today call the war in Ukraine a “hybrid war” – that is, a war that uses not only traditional battlefield weapons but also all means of destruction, including economic and information warfare.

“Thanks to information technologies, modern wars are not limited to specific territories; they are not confined to one continent, without any consequences to those who seem to be far away. Everyone in the Western world today experiences the consequences of this information war, which targets truth by disseminating ‘fake news’ …Unfortunately, not even your country or other developed countries in Western Europe have been spared from these attacks. Please remember: it is not only our war – it is a war for humanity,” said Patriarch Sviatoslav.

Patriarch Sviatoslav took part in the mass on the occasion of the convention’s opening, which was led by Supreme Chaplain Archbishop William E. Lori. Ten cardinals, 74 archbishops and bishops, as well as more than 100 priests prayed at the mass.

Overall, more than 2,500 delegates from around the world are took part in the convention. The delegation from Ukraine was led by Bohdan Kovalyov.

According to the UGCC Department of Information, the official visit of the UGCC primate to the United States began on August 6. During his visit, Patriarch Sviatoslav held a number of important meetings in Baltimore, Stamford, St Paul, Minn., and Philadelphia. His visit was to end on August 22.