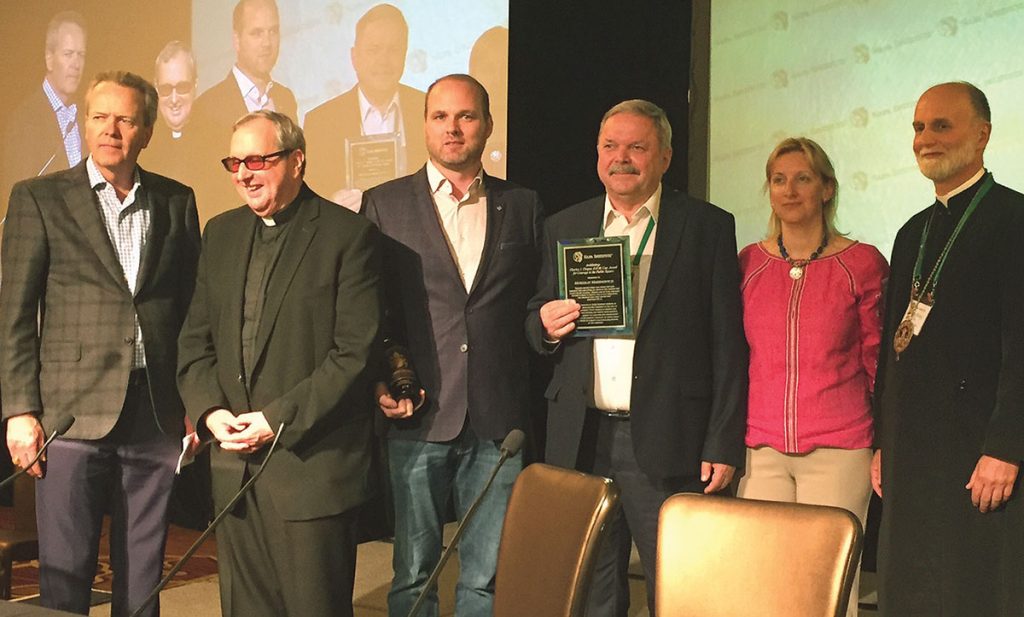 IRVINE, Calif. – Each summer since 2011, the Napa Institute has served as an important gathering place for American Catholic leaders seeking to develop new strategies and to discuss critical challenges facing the Church and its faithful. In past years, featured speakers have included Cardinals Timothy Dolan and Christoph Schonborn, papal biographer George Weigel, and presidential contenders Rick Santorum and Carly Fiorina.

The first of the lectures was delivered on July 12, when Father Morozowich, the dean of theology at The Catholic University of America, gave an impassioned presentation on the deeply inspiring relationship between Pope John Paul II and the Ukrainian Catholic Church.

He devoted much of his lecture to the life of Cardinal Joseph Slipyj and his remarkable 20-year tenure as the patriarch of the largest Eastern rite Church. After spending 18 years in a Soviet prison camp, Slipyj was released in 1963 and played the pivotal role in reinvigorating the Ukrainian Catholic Church worldwide.

Father Morozowich also focused on St. John Paul’s historic papal visit to Ukraine in 2001, when he beatified 28 Ukrainian martyrs and saints and blessed the cornerstone of the Ukrainian Catholic University in Lviv.

Bishop Borys introduced Prof. Myroslav Marynovych, UCU’s vice-rector of university mission, to offer his perspective as a survivor of seven years of hard labor in one of the harshest prison camps in the Soviet gulag – Perm Camp 36. In 2014, Prof. Marynovych was the recipient of the Truman-Reagan Medal of Freedom in Washington and was honored with the Sergio Vieira de Mello Humanitarian Award (2013).

Prof. Marynovych told the audience that the world has not yet come to grips with the legacy of the Soviet Union.

“We are dealing now with the consequence of the injustice made by the 1945 Yalta agreement. Firstly, it created double standards in evaluating the crimes of totalitarian systems: Nazi crimes were publicly and totally condemned; Communist crimes were covered up by security imperatives and almost taken out of ethical evaluation.”

He continued: “For many people in the West, Nazi Germany was an absolute evil, while the Communist Soviet Union was a victorious good with some occasional dark spots on its shining garments. What was forgotten was the fact that the main winner of the war, Stalin’s Soviet Union, entered the war as an ally of its main begetter, Hitler’s Germany.”

Prof. Marynovych pointed out the painful ironies inherent in this double standard: ”the world heard the pain of victims of Gestapo and didn’t hear that of victims of the NKVD.” As Leszek Kolakowski ironically put it: “Should a prisoner who was dying in Vorkuta [Siberia] be pleased… with the fact that he avoided the same fate in Dachau? The moral equation of Nazism and communism is, from my point of view, absolutely justified and even necessary.”

Prof. Marynovych urged the audience not to underestimate the danger posed by the Putin regime. He pointed out that Vladimir Putin has taken a new approach in his rivalry with the United States. “There was a time when [Nikita] Khrushchev invented the slogan: ‘Let us catch up to America and leave it behind!’ The idea was to make the Soviet Union as big as the U.S.A. Now Putin understands that is impossible. So the goal was modified: ‘Let us make America and the West as weak as possible and force it down to our level.’ So it is not only Ukraine that is under threat,” he said. “The whole civilized order is under a state of siege.”

Prof. Opatska, the vice-rector for academic affairs at UCU and the co-founder of the Lviv Business School, offered her assessment of the 2013-2014 Maidan Revolution of Dignity and the pivotal moment this represented for the Ukrainian people.

Prof. Opatska also raised the plight of filmmaker and political prisoner Oleg Sentsov as an icon of Ukraine’s ongoing struggle against Russian aggression. She said that she felt a special kinship with Mr. Sentsov as they both are 42 years old, yet Mr. Sentsov is on the 68th day of a hunger strike protesting his unjust imprisonment on trumped-up charges for having denounced Russia’s illegal annexation of Crimea.

At the conclusion of the panel discussion, Timothy Busch, a prominent attorney in California’s Orange County and the founder of the Napa Institute, took the stage to present a special award to Prof. Marynovych in honor of his moral witness against Soviet tyranny.

The extensive exposure provided for the Ukrainian Catholic Church at this year’s Napa conference also included an Eastern Rite liturgy that was celebrated by Bishop Borys and Bishop Venedykt Alekseychuk, the head of the St. Nicholas Eparchy of Chicago, which includes Ukrainian Catholic churches on the West Coast and all regions west of Chicago. The liturgy in the picturesque grotto chapel at the Meritage Hotel and Conference Center in Napa attracted a number of Roman Catholics interested in learning more about the Eastern Rite Churches.

Speaking on behalf of UCEF, Chief Development Officer Alexander Kuzma expressed gratitude to Luke Miller and Gregory Hallick, who introduced the Napa Institute to the foundation and opened new horizons to potential Roman Catholic supporters on the West Coast.