UOC-U.S.A. celebrates its centennial with liturgy and banquet 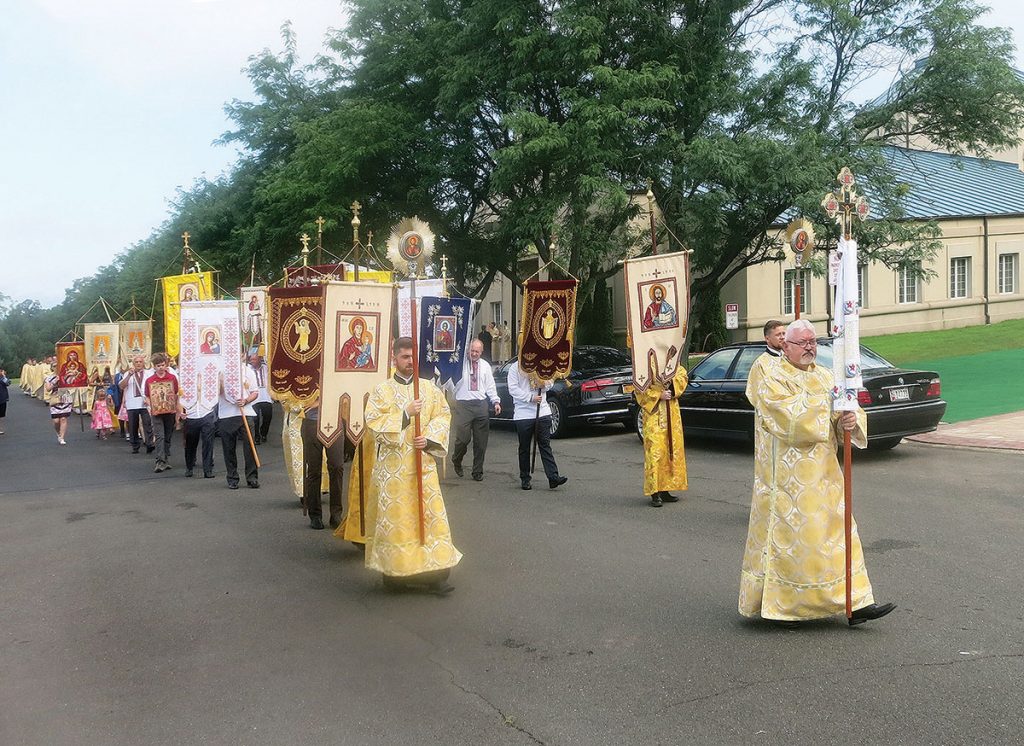 Matthew Dubas
The procession of the faithful begins before the hierarchical divine liturgy marking the centennial of the Ukrainian Orthodox Church of the U.S.A.

SOUTH BOUND BROOK/SOMERSET, N.J. – More than 500 people, including more than 100 clergy members, celebrated the centennial of the founding of the Ukrainian Orthodox Church of the U.S.A. on July 28 with a hierarchical divine liturgy led by Metropolitan Yurij of the Ukrainian Orthodox Church of Canada. The feast day on July 28, according to the Julian calendar, is dedicated to Grand Prince Volodymyr the Great, who is credited with baptizing Ukraine into Christianity in 988.

A procession, led by a cross-bearer who was joined by participants carrying church banners and flags of various church organizations, began the centennial celebrations as participants gathered to celebrate the centennial divine liturgy. From the steps of the Ukrainian Cultural Center, after snaking their way around the St. Sophia Seminary building, participants walked along Easton Avenue with the aid of local police who closed off a section of the road for the procession.

A large tent set up in front of St. Andrew Memorial Church for the outdoor liturgy provided shade for the faithful. Clergy were organized on one side of the central tent with their own canopy on the left; and on the right under their own canopy, the mixed choir of singers from more than 12 area churches provided the masterful bilingual responses and hymns, under the direction of Dr. Michael Andrec, choir director at St. Andrew Memorial Church.

Archbishop Daniel, ruling hierarch of the Western Eparchy of the UOC-U.S.A. and consistory president, was in Ukraine as part of a delegation representing Ecumenical Patriarch Bartholomew I for the celebration of the 1,030th anniversary of the baptism of Ukraine. The delegation included Metropolitan Emmanuel of the Greek Orthodox Metropolis of France (exarch of the Ecumenical Patriarchate), and Bishop Ilarion of Edmonton and the Western Eparchy of the Ukrainian Orthodox Church of Canada. The delegation met with President Petro Poroshenko and Metropo-litan Emmanuel joined Patiriarch Filaret of the Ukrainian Orthodox Church – Kyiv Patriar-chate for the celebratory services.

Metropolitan Antony also was not present at the July 28 celebration in New Jersey; he was hospitalized after sustaining injuries from a motor vehicle accident on Friday evening.

During liturgy, Metropolitan Yurij recounted the foundation of Kyiv-Rus’ and noted that the Ukrainian Orthodox Church, with its center in Kyiv, has been aligned with Constantinople since the baptism of Ukraine 1,030 years ago. For 27 years since Ukraine’s renewed independence, Ukrainians have been waiting for Constanti-nople to grant a Tomos of Autocephaly to the Ukrainian Orthodox Church in Ukraine. Much remains unknown, he said, but based on Patriarch Bartholomew’s latest statements, there is reason for optimism that the Tomos will be granted. Keep your faith in God who has set all things in His fullness of time, he reminded the faithful.

Divine liturgy concluded with the singing of the Prayer for Ukraine (Bozhe Velykyi Yedynyi) and “Mnohaya Lita” (God Grant You Many Years). The faithful then departed for the Ukrainian Cultural Center to begin the celebratory banquet.

Following the opening prayer of “Our Father,” Metropolitan Yurij said: “This centennial celebration and the celebration of the baptism of Ukraine 1,030 years ago unites Ukraine and the diaspora. All of Orthodoxy awaits the granting of the Tomos of Autocephaly for the Ukrainian Orthodox Church.”

“Youth are the inheritors of the work of their ancestors, and much work remains,” he continued. “However, Ukraine today is at the forefront of the news, as compared with 100 years ago. If the Tomos is granted, its celebration will be just slightly less than the baptism of Ukraine.”

Metropolitan Yurij stated: ”We pray that the day is approaching when the bishops of the Ukrainian diaspora will be able to serve with the bishops of Ukraine in St. Sophia Cathedral in Kyiv.”

The Ukrainian Orthodox Church of Canada, Metropolitan Yurij informed the audience, will host its centennial celebrations on August 9-12 in Saskatoon, Saskatchewan, to coincide with its Sobor.

A video greeting was delivered by Patriarch Bartholomew, who recalled the work of previous hierarchs of the UOC-U.S.A. – Metropolitan Constantine and Archbishop Vsevolod. “The ties between the Ukrainian Orthodox Church and the Ecumenical Patriarchate are centuries old, and as St. Paul reminded, ‘let us rejoice and give thanks.’ ”

Other statements were read from Archbishop Jeremiah of Brazil of the UOC-U.S.A.; Bishop Herasimos of the Greek Orthodox Archdiocese of New York; Borys Filatov, the mayor of Dnipro who had visited the Metropolia Center in June; Bishop James F. Checchio of the Roman Catholic Church Diocese of Metuchen, N.J.; retired Metropolitan Stefan Soroka of the Ukrainian Catholic Church in the U.S.; The Ukrainian Museum; and the St. Andrew School of Ukrainian Studies in South Bound Brook, N.J.

Archbishop Demetrios, sensing the anticipation that Ukrainians expressed following the move by Ukraine for a Tomos of Autocephaly, assured the audience,

“Ecumenical Patriarch Bartholomew cares about Ukraine.” The archbishop noted his amazement at the high-caliber celebration – from the pop-up card, to all of the details lovingly applied to make the event special. He also underscored the significance of the centennial, as Ukrainians fled persecution, came to a new land and made a new home for themselves and their children, preserving their faith by building the Ukrainian Orthodox Church of the U.S.A.

Metropolitan Yurij thanked the archbishop for his kind words and wished for the Ecumenical Synod’s members good health to continue their work. The work of the Orthodox Church is ongoing, as evidenced by its seminarians and the vibrant youth of the Church, its activities and organizations. The Rev. Victor Wronskyj, vice-president of the Consistory of the UOC-U.S.A., presented Archbishop Demetrios with a cross and panagia set to commemorate the event. As he accepted the gifts, Archbishop Demetrios was visibly moved to tears.

Visiting Ukrainian Orthodox clergy from Great Britain, the Rev. Bohdan Matviychuk; from Australia, the Rev. Michael Solomko; and from Belgium, the Rev. Vitaliy Derewianka; brought best wishes for the centennial celebration of the UOC in the U.S.A. and the diaspora.

Greetings were also delivered by the Senior and Junior Ukrainian Orthodox League presidents, respectively, John Holowka and Orest Mahlay. (The 71st Convention of the Ukrainian Orthodox League was being held concurrently with the centennial celebration.) The UOL’s leaders described the work done by the Church, including All Saints Camp, various scholarships for its youth, as well as preparing the future leaders of the Church. The previous 100 years of work has created prosperity and hope for the future. A check in the amount of $10,000 was presented to the Rev. Steven Hutnik, UOL advisor.

Michael Komichak, chairman of the organizing committee for the 71st UOL Convention, named the recipients of the Metropolitan John (Theodorovich) Scholarship, as well as the seminarian recipients of other scholarships. A check for $9,000 was presented to the Rev. Volodymyr Yavorskyi, who graduated St. Sophia’s Seminary and began work at St. John the Baptist Ukrainian Orthodox Church in Portland, Ore. Seminarians from its distance-learning program also received scholarships.

A historical overview of the life of the UOC-U.S.A.’s first hierarch, Bishop John (Theodorovich), was read, following a statement of greeting by Archbishop Daniel.

Both Consul Holubov and Ambassador Chaly, in their greetings underscored that Ukrainians continue to pray for the autocephaly of the UOC, for the protection of Ukraine against all adversaries, for the unity of its people, and for harmony and blessings on these celebrations – the baptism of Ukraine and the centennial of the UOC-U.S.A.

Ambassador Chaly noted that in Ukraine today there is unity like never before. All across the world, people are talking about Ukraine as its fights against Russia – one of the largest armies in the world, he observed. In the face of this, Ukraine has been able to preserve its national identity, and its people have returned to its Church, which plays the central role in daily life.

He presented a copy of an icon from the president of Ukraine; other copies are being presented to Ukrainian Orthodox Church centers all over the world. The work to achieve autocephaly for Ukraine is continuinuing in Washington. He concluded by thanking the diaspora for its continued humanitarian support for the situation in Ukraine.

The Souper Bowl Sunday initiative – where churches host soup meals after divine liturgy on Super Bowl Sunday – raised $100,000 this year, and a check was presented to the Rev. Ihor Mahlay, president of the St. Andrew Society. The Rev. Protodeacon Mahlay explained that St. Andrew Society carries out charitable activities for the Church in Ukraine and around the world, and thanked its sponsors who have helped raise more than $1.3 million in humanitarian aid to Ukraine.

Coffee and a variety of desserts were served as the banquet’s formal program came to a close. The highlight was a large confection filled with raspberry mousse and custard filling made in the shape of number 100 to mark the occasion.

The dance groups each performed a welcome dance (“Pryvit”) and the crowd favorite, the “Hopak.” Each dance had its own flavor, with opportunities to showcase twirls, leaps and fancy footwork. Other dances included a dance from the Hutsul region of Ukraine, as well as a male-led competitive dance called “Chuzhi” (strangers). The Korinya folk band members wowed audiences with both their instrumentation and vocal abilities on Ukrainian folk melodies and traditional songs. Many people in the audience sang along with the performers.

With the “Hopak” finale, the centennial banquet ended as the Church embarks on writing the history of its next 100 years.

For more information, readers may visit the newly redesigned website of the UOC-U.S.A. at www.uocofusa.org.