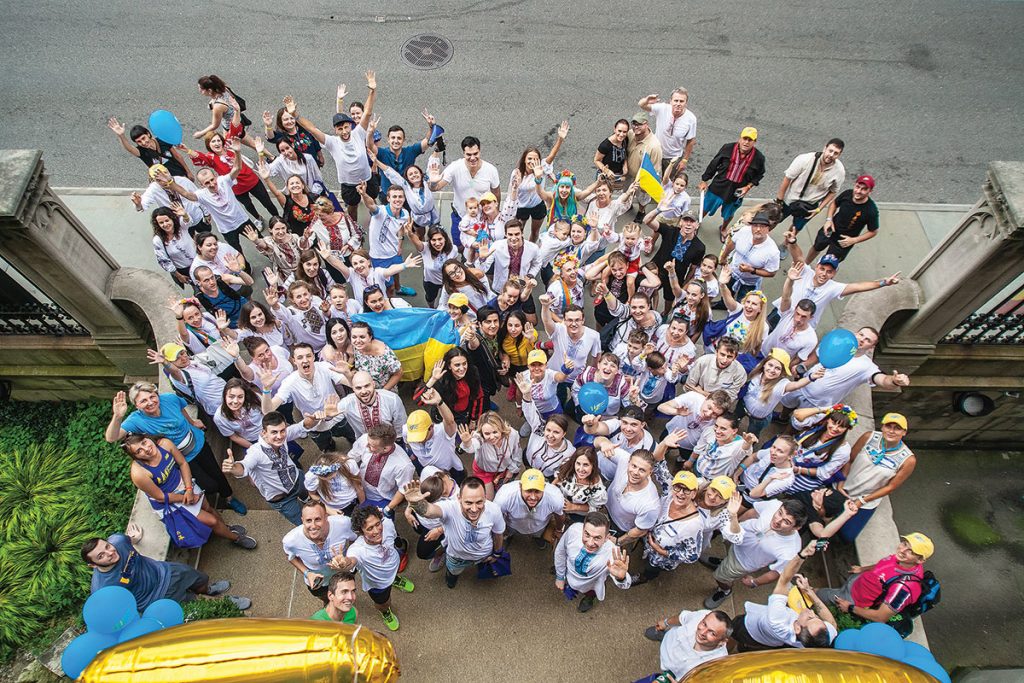 NEW YORK – On Sunday, August 26, in various sections of New York’s Central Park, it was nearly impossible to count the many smiling runners who were dressed not in traditional running gear, but in Ukrainian embroidered shirts. Many of the bystanders who saw the runners exclaimed “Ukraine!”

The run was held to commemorate the 27th anniversary of Ukraine’s Independence Day (August 24). More than 120 Ukrainians from New York and the surrounding area – active lifestyle enthusiasts, dressed in their embroidered finery – participated in a multi-kilometer run through the busy park.

Organized by the Ukrainian Running Club New York, this year’s “Vyshyvanka Run” attracted participants of various age groups and various levels of physical conditioning. For the runners it was important to demonstrate the Ukrainian spirit. The strongest runners had a chance to run a four-kilometer course around the Jacqueline Kennedy Onassis Reservoir, and could choose one of three running groups. Runners were responsible for keeping their own running times.

Those who disliked working up a sweat came to meet new people and to show off some amazing examples of Ukrainian embroidery, while exploring the unfamiliar corners of Central Park during a casual walk. These participants enjoyed a detailed explanation about of 10 landmark features found in the park during their three-kilometer course. It was quite a sight to see runners dressed in Ukrainian embroidered shirts, carrying Ukrainian flags and tryzubs (tridents) as they made their way through Central Park in New York – the capital city of the world.

Before the race began – walking or running – participants were led in stretching and aerobic warm-up by aerobics instructor Lada Lysniak, who made the process fun and energizing. Before the start of the race, runners were given a specially made color-coded map to help guide them through the labyrinth of pathways and roads that criss-cross Central Park.

After the “active” portion of the run, participants were invited to sample food selections provided by the Veselka Restaurant. During this time, runners had a chance to take photos with accessories, including head wreaths (vinok) and Ukrainian embroidery.

The race was made possible through the donations and support of sponsors, including Veselka Restaurant, Ukrainian Institute of America (which opened its doors for participants and the celebrations), Bauer Dental Arts, Alex’s Meat Distributors, as well as the coordination of 20 volunteers (Tetiana Samokysh, Natalia Duda, Nastia Shkolniy, Zhenya Holovach, Nadia York, Yulia Bebiy, Yulia Klokova, Volodymyr Gogilchyniy, Sophia Tarasova, Oleksandra Soldatenka, Ms. Lysniak, Yulia Dereka, Anna Shpook, Ilona Duda and many others) who served in various capacities – from registering participants, to the selling of embroidered running shirts, and leading the running and walking groups.

Many thanks were offered to them, as well as the Ukrainian Running Club New York, for hosting such a successful event. Nearly $1,300 was raised for the Kyiv-based Skhodynky school for children with autism and other mental health issues, which is run almost entirely by parents and volunteers.

The Ukrainian Independence Day celebrations continued with participants shouting “Glory to Ukraine! Glory to the Heroes!” and concluded with a group photo. News of the event was carried by television stations in Ukraine, as well as in print and digital media outlets in Ukraine.

Participants departed feeling uplifted, with plans for the future: some committed themselves to running more often, some to get together more often and to increase their activity level, and some wanted to return to Central Park to explore more of the far corners of the park.

The Ukrainian Running Club New York is marking the 10th anniversary of its founding. Since that time, the club has grown in numbers and active members who are striving to improve their athleticism – both individually and as a club in general. The club invites anyone interested to join, and readers can find more information on the club’s Facebook page: www.facebook.com/ukrainianrunningclub.