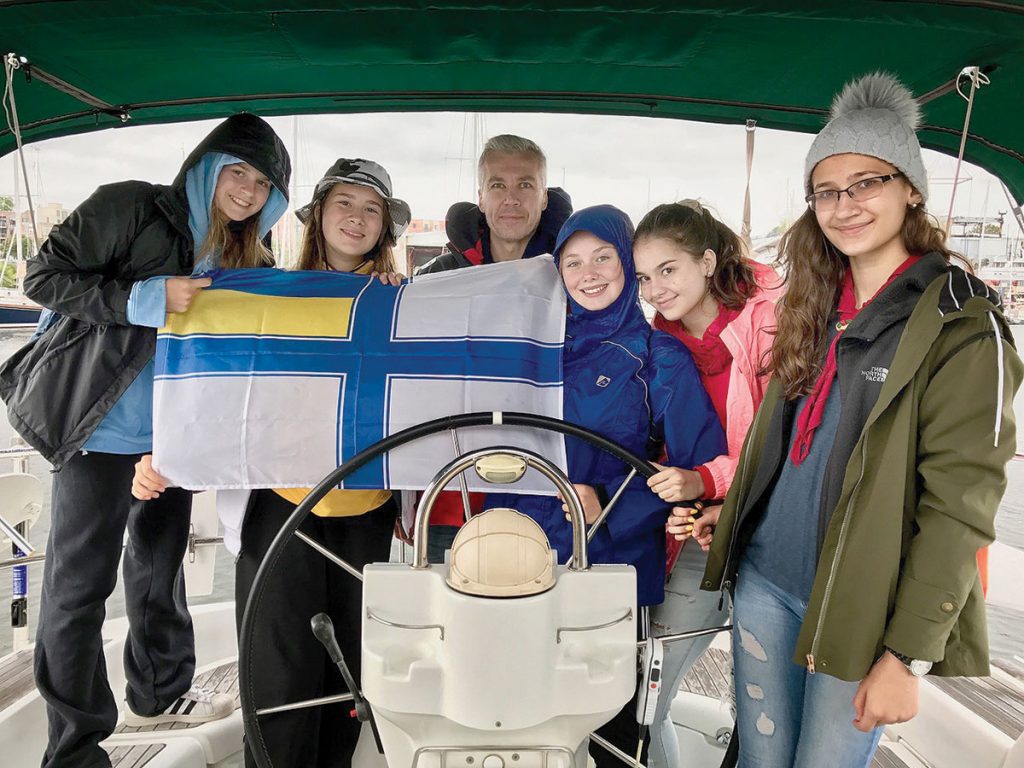 Damian Handzy
The girls of the Passaic Troop with Captain Jerome Mychalowych holding the flag of the Ukrainian Navy.

MAMARONECK, N.Y. – As Plast’s “Year of Sea Scouting” enters its final phase, Ukrainian scout troops around the world are taking to the water to demonstrate the skills they’ve learned throughout 2018. As reported earlier in this newspaper, Plast Ukrainian Scouting Organization declared 2018 the “Year of Sea Scouting” to commemorate the founding of the Ukrainian Navy on April 29, 1918. In the U.S., Plast scouts have taken part in a year-long competition, organized by the Chornomortsi fraternity of older scouts, in which they can win prizes and earn a special one-time merit badge covering the basics of maritime scouting.

This autumn, each local troop of Plast scouts is taking a three- to four-hour long trip on the water in canoes, kayaks, motor boats or sailboats. The purpose of the trip is to expose the scouts to practical sea scouting. Not only is each scout to be in control of the vessel for some amount of time, but the troops as a whole have an opportunity to practice the many skills they’ve learned this year, such as navigation, knot tying, and singing Ukrainian sailing songs. Troops competing for the top prizes will submit videos of themselves demonstrating mastery of those skills.

On Sunday, September 9, the Passaic, N.J., troop of Plast scouts – made up of 12 boys and girls age 14-17 – went sailing on Long Island Sound on a 42-foot sailboat owned and skippered by Jerome Mychalowych, a life-long sailor and member of the Chornomortsi. The scouts left from Orienta Yatch Club in Mamaroneck, N.Y., on a course they themselves set, tacking (zig-zagging) between Long Island and the New York mainland. With 10- to 15-knot winds gusting to 20 knots, the scouts were exposed to rugged seas and two- to three-foot swells under near-constant rain. Despite the challenging conditions, the scouts took on the duties of Captain Mychalowych’s crew, including raising and trimming the sails, coiling the lines, plotting and maintaining their course, and taking turns at the helm. They even secured the boat at the dock for lunch and at the end of the day moored the boat in its berth at the marina.

One of the main activities for the day was to practice “dead reckoning” – a form of navigation in which a sailor uses a chart and a compass to determine his/her starting position and estimate the arrival time at the designated destination without GPS or other modern tools. The scouts triangulated their position by taking two bearings of landmarks on shore and then set a course for the opposite shore and estimated their time of arrival based on the wind speed and their direction of travel. After the estimated time passed, they once again determined their position using the same triangulating technique to determine how closely they came to their desired destination.

An unexpected bit of fun came with the increasing late-day wind: waves that crashed into the boat soaked the scouts sitting on the windward side. On the trip home, the scouts rated the trip a 9 out of 10 despite the cold rain, and they all said they’d enjoy going sailing again.

The motivation of the organizers for the entire “Year of Sea Scouting” has been to not only expose scouts to the excitement and challenges of water-based scouting activities but to also engender a love of water sports in its many forms. For the scouts from Passaic, that mission has been accomplished.