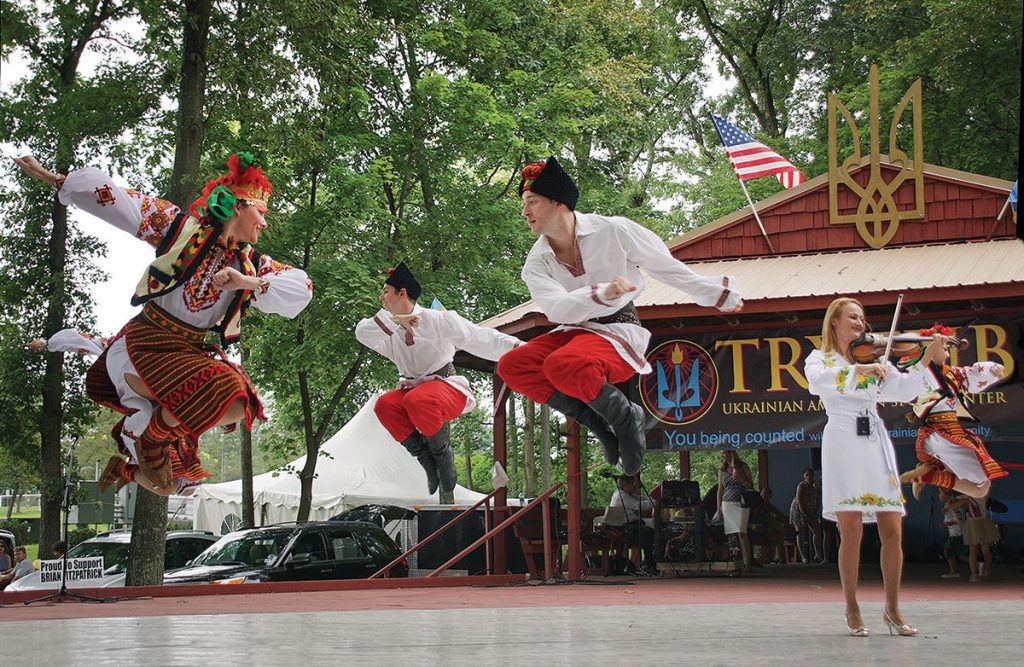 Nearly 3,000 attended the 27th annual Ukrainian Independence Folk Festival on Sunday, August 26, at the Tryzub Ukrainian American Sport Center. On a lovely summer afternoon, a shady festival glade adorned with the flags of the United States and Ukraine welcomed a diverse crowd of enthusiastic festival-goers.

Ukrainians by birth or ancestry came to demonstrate solidarity with their homeland and its people. Many non-Ukrainians also attended to experience the culture and history of a nation that dares to defy Vladimir Putin and his formidable arsenal of soldiers, arms, tanks, artillery, naval and air forces, advanced resources of hybrid warfare.

Danylo Nysch, the president of the Philadelphia Ukrainian Nationals, Tryzub’s soccer program, and Anatoli Murha and Yuliya Stupen, representatives of the festival’s chief sponsor, the Ukrainian Selfreliance Federal Credit Union of Philadelphia, greeted the audience and introduced Eugene Luciw as the concert’s master of ceremonies.

Representatives of the area’s Vietnamese American and Korean communities, some attired in their national folk garb, also participated in the opening ceremonies.

Then, a tremendous cast of performers presented a briskly paced cascade of Ukrainian music, song and dance. As is the tradition at Tryzub, the artists themselves, spearheaded by the Voloshky and Iskra Ukrainian dance ensembles’ artistic directors, Taras Lewyckyj and Andrij Cybyk, designed, created and executed an integrated collaborative concert program that underscored the theme: “A Celebration of Liberty and Unity.”

The dancers, having rehearsed and learned each other’s choreographies, repeatedly took the stage and danced together as one ensemble. What’s more, the ensembles premiered several dances that they had developed together. One dance, in particular, had been choreographed to the music of Innesa Tymochko Dekajlo’s vibrant violin. She remained on stage and played live to this wonderful Hutsul dance.

The featured performer, Honored Artist of Ukraine Iryna Lonchyna, a singer-songwriter from Ivano-Frankivsk, performed a carefully crafted and vibrant mix of her own works as well as well-known Ukrainian folk tunes.

A stirring moment occurred when Maj. Mykola Levkun of Ukraine’s army took the stage and addressed the audience. He is here for special surgical and restorative treatment for horrific injuries sustained on the Russian front, that is, Ukraine’s eastern region. He lost both of his legs and has been wheelchair bound. The organization Revived Soldiers of Ukraine had arranged for this fine officer to be treated here in the US.

Through his very humble, but extremely effective, words, Maj. Levkun drew the audience’s attention to Ukraine’s current struggle for freedom, dignity and self-determination. He expressed heartfelt thanks to the kindness of the Revived Soldiers organization, to its tireless volunteers and to the Ukrainian community of the metropolitan New York area for helping to raise funds for his “revival.” Under the care of Ukrainian American physician Oleksandra Kapral, the major underwent reconstructive surgery to his upper right thigh at Coney Island Hospital. He is on his way to Orlando, Fla., where he will be fitted with appropriate prosthetic devices.

Another highlight was the arrival of the Chumak Way team of bicyclists, a group of athletes and Ukrainian war veterans who had biked over 6,000 miles across the North America. The festival was their last stop before the team ended its journey for peace and humanitarian aid for Ukrainian veterans, widows and orphans at the Holodomor Memorial in Washington.

In the program’s finale, the Voloshky and Iskra dancers broke out into a vibrant and majestic “Hopak.” It was another example of the cooperation of these young performing artists.

As the encore music of Hopak continued to play, the MC called all of the performers to the stage for a final good-bye. Ms. Lonchyna led a rousing “Mnohaya Lita.” Shouts of “Glory to Ukraine – Glory to its Heroes” closed the concert.

Throughout the day, colorful Ukrainian embroideries, folk arts and crafts, jewelry, emblems, motifs and wares were displayed by the vendors. The Kuban Kozak Society of New Jersey, as well as the Banner of Jasna Gora historical re-enactment group, presented the clothing, armor, armaments and daily wares of Ukraine’s Kozak era.

A bountiful Ukrainian kitchen and BBQ grill served tasty meals and desserts. An assortment of tap beers, wines, spirits and other refreshments added to the colors and flavors of the day. Face painting, caricature drawings and other amusements were available for kids of all ages.

A vibrant dance at the outdoor dance pavilion followed to the tunes of the Vox Ethnika orchestra.