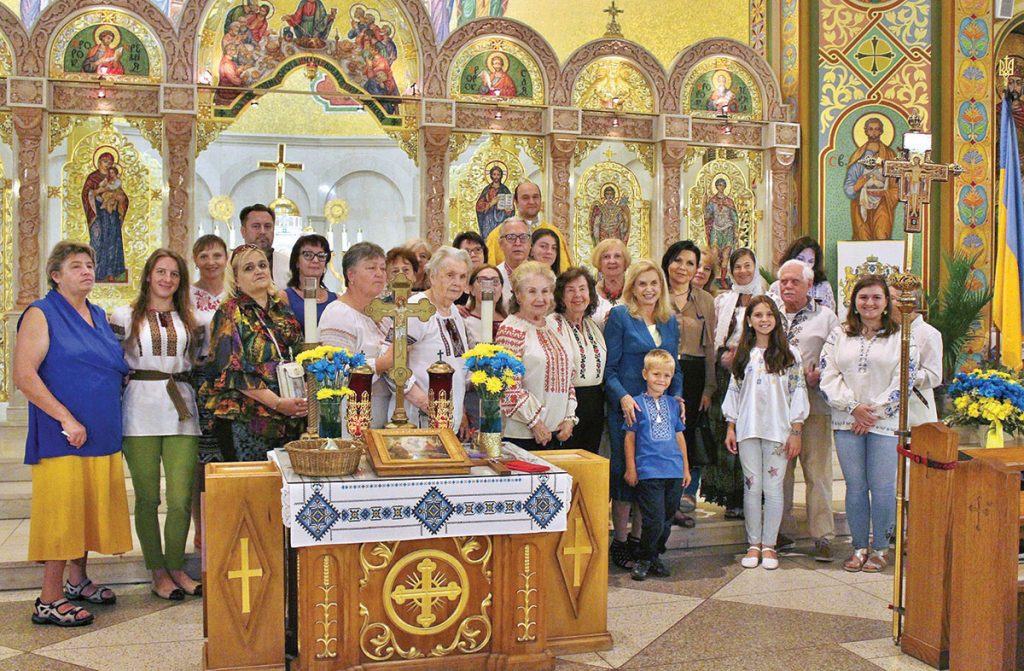 On Friday, August 24, a special commemorative liturgy was celebrated at St. George Ukrainian Catholic Church in Manhattan’s East Village. With the coordinated efforts of the United Ukrainian American Organizations of New York, a local chapter of the Ukrainian Congress Committee of America (UCCA), the service honoring 27 years of Ukraine’s renewed independence was attended by Rep. Carolyn Maloney (D-N.Y.) as well as local community leaders.

Following the conclusion of the liturgy by the Rev. Emilian Dorosh, OSBM, the cantor for the service, UCCA-NY Vice-President Andrij Dobriansky, was invited to address the congregation from the podium. To mark 27 years of renewed independence, Mr. Dobriansky explained, UCCA-NY had reached out to elected officials from the City Council and all the way up to the State House. He then proceeded to read statements issued by New York City Mayor Bill de Blasio as well as City Councilmember Carlina Rivera, which had been translated into the Ukrainian-language by UCCA’s National Office.

In his statement, Mayor de Blasio “commended UCCA’s members and supporters for all they do to unite and uplift Ukrainian New Yorkers and preserve and promote their rich cultural heritage,” while Councilmember Rivera commented that the day’s celebrations “should serve as a reminder of the perseverance of the Ukrainian people and the close relationship between our people and our countries.”

Without translating it in full, Mr. Dobriansky went on to point out that Gov. Andrew Cuomo’s state proclamation, a copy of which hung in the church vestibule, had been distributed throughout the communities of New York state, and proudly proclaimed August 24 “Ukrainian Independence Day in the Empire State.”

The final speaker of the evening was Rep. Maloney, who has represented the East Village and its surrounding neighborhoods in Congress since 2012. In addition to listing notable advances in U.S.-Ukraine relations over the past few years, and highlighting her recent vote in favor of the John F. McCain National Defense Authorization Act (NDAA), which authorized an additional $250 million in security assistance to Ukraine, Rep. Maloney announced that she was signing on as a co-sponsor of H. Res. 608, “expressing the sense of the House of Representatives that the 85th anniversary of the Ukrainian Famine-Genocide of 1932-1933 (Holodomor) should serve as a reminder of repressive Soviet policies against the people of Ukraine.”

In closing, the congresswoman thanked the UCCA and local organizers, and encouraged the attendees to aid their community by registering and turning out to vote in the upcoming mid-term elections. She urged those with Ukrainian citizenship to make preparations to vote as well, since the Ukrainian Consulate located in the congresswoman’s district will serve as a polling site in Ukraine’s 2019 elections.