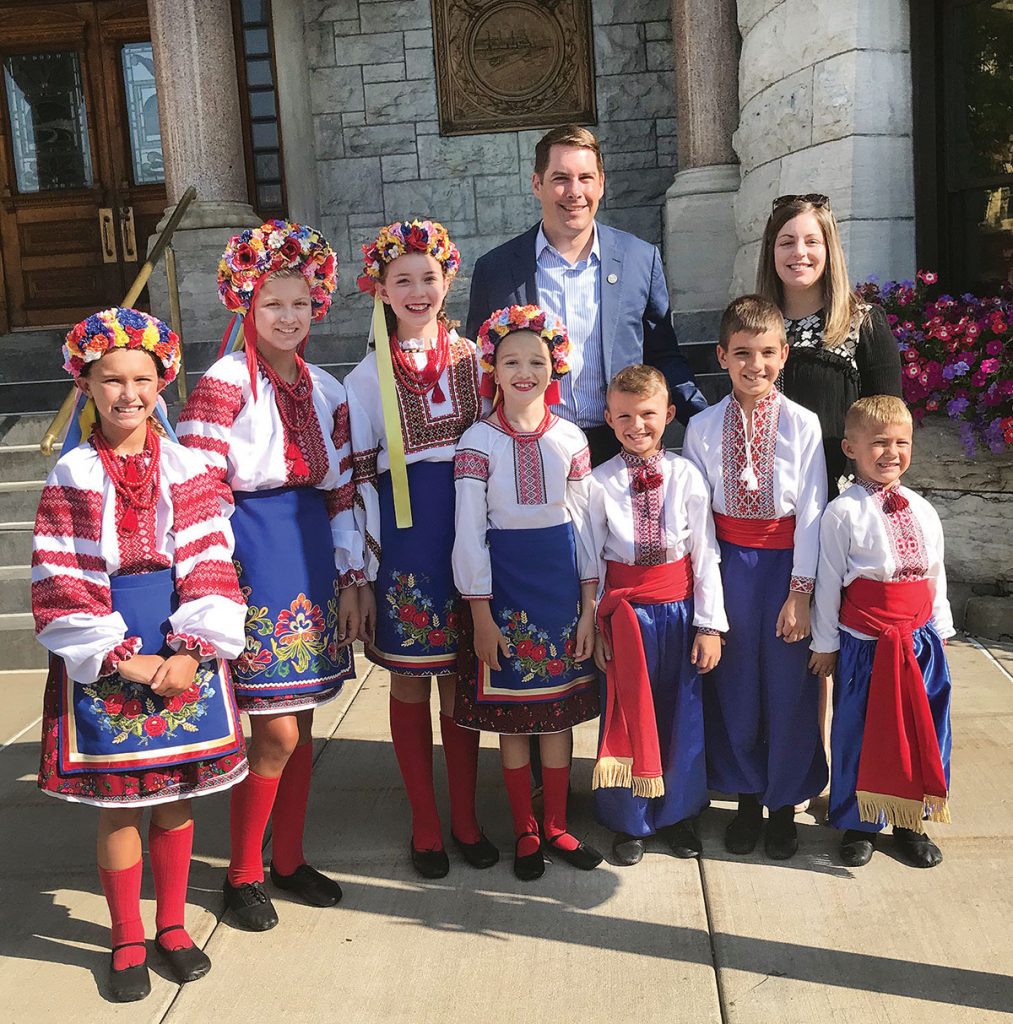 On a pristinely clear and sunny August 24, a diverse crowd of Syracuse University students, pillars of the Ukrainian America community, retirees and multigenerational professionals with their families, donned their Ukrainian shirts to attend a Ukrainian flag-raising ceremony at Syracuse City Hall to mark the 27th anniversary of Ukraine’s independence.

As people gathered for the morning’s program, the youngest 5- to 8-year-old members of the Odesa dance ensemble and their director Christina Bobesky, Ph.D., had an opportunity to meet the newly elected mayor of Syracuse, Ben Walsh, and take a picture with him. Later on, the dancers’ charming performance of “Little Hopak” delighted both the assembled crowd and onlookers passing by.

Mayor Walsh read the proclamation designating August 24, 2018, as Ukrainian Independence Day in the County of Onondaga and the City of Syracuse. Mayor Walsh also noted the rich cultural impact the Ukrainian residents have made over the years in the city of Syracuse and outlying areas of upstate New York.

Lastly, a comprehensive keynote address by former President of the Ukrainian Medical Association of North America Borys Buniak, M.D., touched upon such issues as Russia’s meddling in the 2016 U.S. presidential election and the dissemination of online “content polluters” by automated bots and trolls to sow social discord.

Dr. Buniak also described in detail the agonizing physiological stages of starvation and how millions suffered this agonizing form of death during the 1932-1933 genocide known as the Holodomor. He indicated that the imprisoned filmmaker from Crimea, Oleh Sentsov, has been on a hunger strike for over 100 days to gain the release of dozens Ukrainians currently held in Russian jails on politically motivated charges. “[Vladimir] Putin has decided to let Sentsov die despite worldwide efforts asking for his release. We can only imagine what he is going through,” he said.

Dr. Buniak ended his address by underscoring Ukraine’s indomitable spirit: “Each time the Russian government thinks they can destroy our culture, it seems that the Ukrainian citizens’ determination for survival brings them even closer together by buttressing their resolve… As the Ukrainian national anthem proclaims, ‘Ще не вмерла Україна’ – ‘Ukraine has not died’. Quite the contrary, Ukraine, long may you live!”