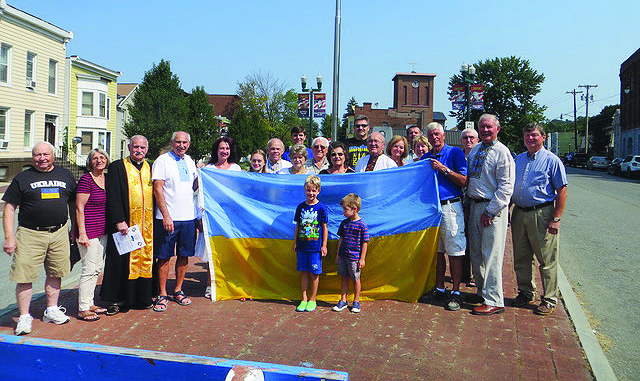 On the occasion of the 27th anniversary of the independence of Ukraine, as Ukrainian flags were raised in the neighboring cities that comprise New York State’s capital region, local community members came together to participate in a “Prayer for Ukraine” at Taras Shevchenko Park in Troy, NY.

According to a worldwide plan, on August 24, at exactly 6 p.m. Kyiv time, Ukrainians from all over Ukraine and throughout the world united to simultaneously sing the spiritual anthem of Ukraine, “Bozhe Velykyi Yedynyi” by composer Mykola Lysenko. In Troy, local community members gathered to take part in the initiative at 11 a.m. Eastern Standard Time.

Participants gathered to raise the Ukrainian flag over Taras Shevchenko Park and to join in song and prayer for peace in war-torn Ukraine.

The park is cared for by members of the Brotherhood Society of St. Nicholas, commonly known as “Bratstvo,” and Ukrainian National Association Branch 13, who aim to keep the city park attractive for anyone who might pass and want to sit and reflect on the great bard of Ukraine.