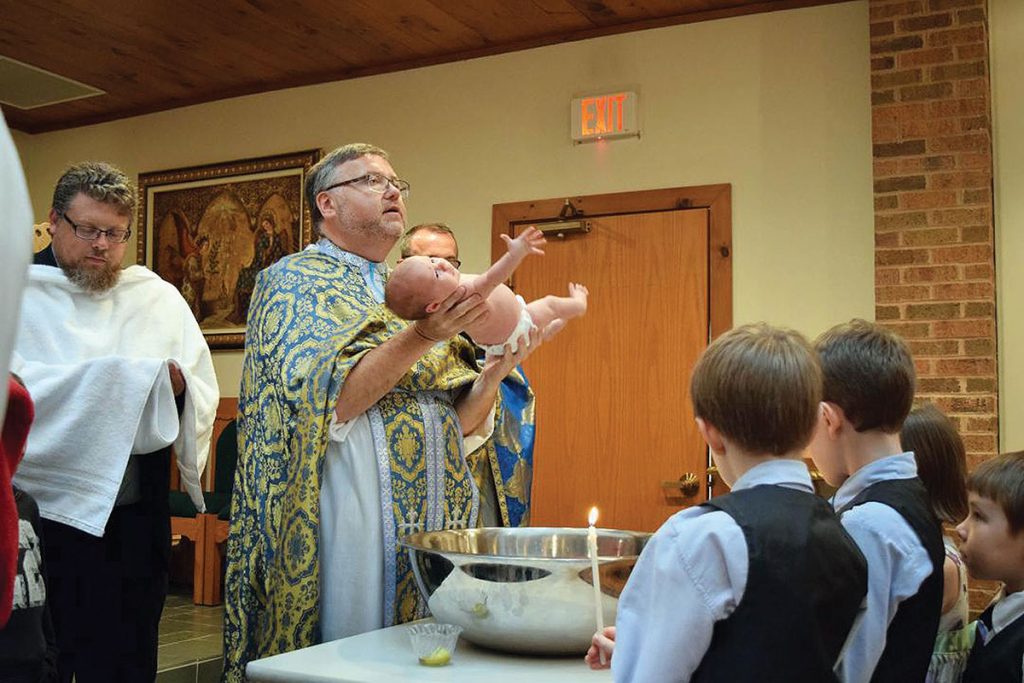 FRONT ROYAL, Va. – Ss. Joachim and Anna Ukrainian Catholic Church, a mission of the Archeparchy of Philadelphia, celebrated its third anniversary in a manner appropriate for a parish full of youth: with its seventh baptism. On September 8 the parishioners also gathered for a parish dinner.

“In our three years, we have gone from our original 10 households to 28 registered households and 110 souls with more than 50 percent under 18 years of age,” notes the Rev. Robert Hitchens, parish administrator, who is also rector of St. Josaphat Ukrainian Catholic Seminary and co-administrator of the Ukrainian Catholic National Shrine of the Holy Family, both in Washington, which is about 70 miles away. In addition to seven baptisms, the parish has also already celebrated two weddings.

“When we first moved to Front Royal, we had to go all the way to Washington, D.C., to Holy Family Ukrainian National Shrine for divine liturgy. We are now so thankful to have a Ukrainian divine liturgy right here in Front Royal,” says parishioner Julie Luckey. Her husband, Dr. William R. Luckey, recently retired after teaching at Christendom College, also located in Front Royal, for over 30 years. Two of their grandsons are altar servers.

Being of Ukrainian descent, the Luckeys are in the minority in the parish. According to the Rev. Hitchens, “25 percent of the community has Ukrainian roots. The rest are Byzantine Catholics, Melkite Catholics, Maronite Catholics and Roman Catholics who have fallen in love with our liturgy and spirituality.”

Parishioners Connie Marshner and her husband, Dr. William Marshner, certainly fit into the majority picture. “He grew up Lutheran, I grew up non-practicing [Roman Catholic],” she says. He “was founding theology faculty member at Christendom, and we are (still) canonically Melkites,” she adds.

Regardless of their mixed backgrounds, the parishioners celebrate St. Nicholas, Pascha and “blessings of water, fruit, flowers, etc.,” says Mrs. Marshner. They also sing the liturgy, enthusiastically, in English.

Mrs. Marshner emphasizes: “We’re in the northern Shenandoah Valley, about 80 miles north-northwest of Washington, D.C., in the Latin Diocese of Arlington [Virginia]. We’re one county away from West Virginia, about an hour from Martinsburg, Berkeley Springs and Harper’s Ferry (from different directions). In Virginia, we’re half an hour from Harrisonburg and from Winchester, and an hour from Staunton, and an hour and a half from Charlottesville.”

“Mentioning that geography might be helpful,” Mrs. Marshner explains, “because those communities are drawing lots of retirees, and there may be Ukrainians who have retired from D.C. or Baltimore to those areas, but would otherwise not know of us.”

Even though the community is located off the beaten path, it has had esteemed visitors like Bishop John Bura and even Metropolitan-emeritus Stefan Soroka, who visited in April, “before he announced his retirement,” adds the Rev. Hitchens.

The Rev. Shenan J. Boquet, president of Human Life International, gracefully allows the community to celebrate weekly liturgy in HLI’s chapel, but the Rev. Hitchens explains, “We are currently hoping to find a more permanent home for our community so that we can become a fulltime parish with its own priest to minister to this community that has great potential.”

With a large number of young people and a special appeal to non-Ukrainians, the parish certainly does have potential. Parishioner Mary Germain has nine children, five of her six sons assist at the altar every Saturday evening, and she is the unofficial cantor, “but we have lots of help from the congregation,” she adds.

The devotion of the priests also adds to the parish’s attraction. “Our priests, Father Hitchens and Father Kharuk, are absolutely wonderful,” says Mrs. Germain. The Rev. Wasyl Kharuk is spiritual director at St. Josaphat Ukrainian Catholic Seminary, co-administrator of the Ukrainian Catholic National Shrine of the Holy Family, and co-administrator of Ss. Joachim and Anna Church. “I have heard several people comment on how ‘good’ they are to go to confession,” she continues. “Their reverence in the celebration of liturgy is such a beautiful example to the people, and especially the altar boys.

“They have gone out of their way to bring Communion to homebound individuals, some who are not even parishioners of our church. They always make it a point to go out and bless the homes during Christmastime, no matter how far away. They are both charitable in their actions and words and always joyful in their works. They have truly been a blessing to our community,” Mrs. Germain comments.

Parishioners Kyle and Amanda Hayes have six children and, Mrs. Hayes says, “we also enjoy the Ukrainian patrimony even though neither of us has Ukrainian heritage.” She adds that her husband and 10-year-old son “just started meeting together with some other parishioners from the church to learn Ukrainian on Friday evenings.”