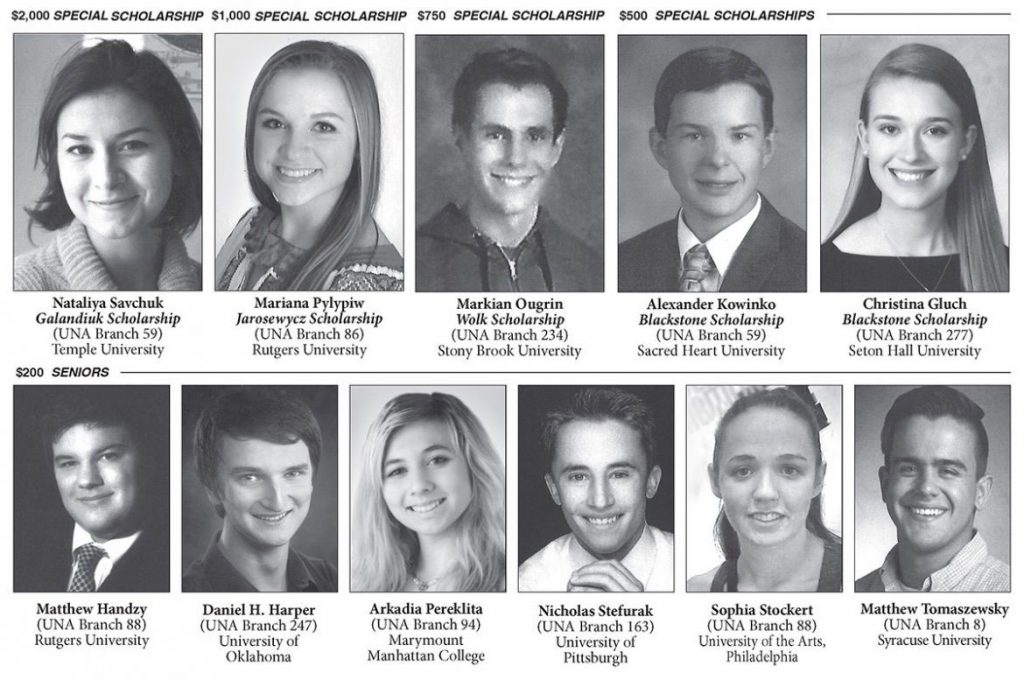 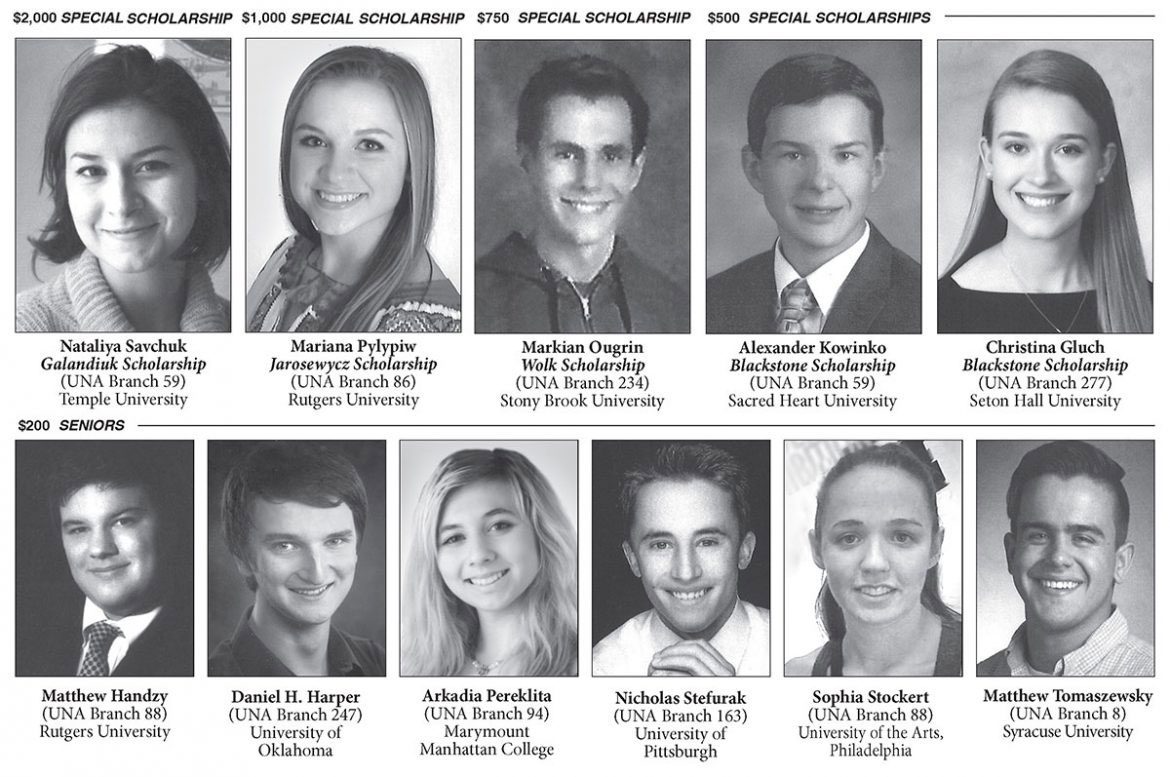 The Ukrainian National Association Scholarship Committee, based on its review of applications, has awarded a total of $10,225, distributed among 39 student members of the UNA who are continuing their education at institutions of higher learning in the U.S.A. and Canada.

Special scholarships, that are set aside in higher dollar amounts, totaled $4,750. Each candidate’s application is reviewed by the UNA Scholarship Committee, and awards are based on financial need, academic performance, field of study, as well as active participation in Ukrainian community organizations.

The Joseph and Dora Galandiuk Scholarship ($2,000) was awarded to Nataliya Savchuk, UNA Branch 59, and an honors student in her junior year studying kinesiology at Temple University. She is a member of the Temple University Ukrainian Society.

The Drs. Maria, Dmytro and Olha Jarosewycz Scholarship ($1,000) was awarded to Mariana Pylypiw, UNA Branch 86. She is an honors student at Rutgers University in her senior year studying business analytics and information technology and economics. Ms. Pylypiw, of Randolph, N.J., serves as president of the Rutgers Ukrainian Club and is a member of the Ukrainian American Youth Association branch based in Whippany, N.J., she has performed with the Iskra Ukrainian Dance Ensemble and is a graduate of the Lesia Ukrayinka School of Ukrainian Studies in Whippany, N.J.

The Joseph Wolk Scholarship ($750) was awarded to Markian Ougrin, a member of UNA Branch 234. He is a freshman at Stony Brook University studying computer science. Mr. Ougrin, from Kerhonkson, N.Y., is a member of the Ukrainian American Youth Association and attended dance camps at Soyuzivka, having danced with the Tsvitka Ukrainian Dance Academy in Sloatsburg, N.Y.

Scholarships of the Ukrainian National Home in Blackstone, Mass., were awarded to Christina Gluch (Branch 277) and Alexander Kowinko (Branch 59) in the amount of $500 each. Ms. Gluch, from West Hartford, Conn., is an honors student studying biology at Seton Hall University. She is a member of Plast Ukrainian Scouting Organization and is a member of its Chortopolokhy sorority. Mr. Kowinko, from Stratford, Conn., is an honors student in his senior year studying nursing at Sacred Heart University in Fairfield, Conn. He is a member of Plast, is active in his local church and occasionally sings with the Yevshan Ukrainian Vocal Ensemble.

The remaining 34 student members of the UNA received standard scholarships, based on year of study. Nine freshmen received $125 each; eight sophomores received $150 each; 10 juniors received $175 each; and seven in their final year of study received $200 each.

The Ukrainian National Association congratulates all the scholarship winners for the 2018-2019 academic year. The UNA wishes them a prosperous and successful future. 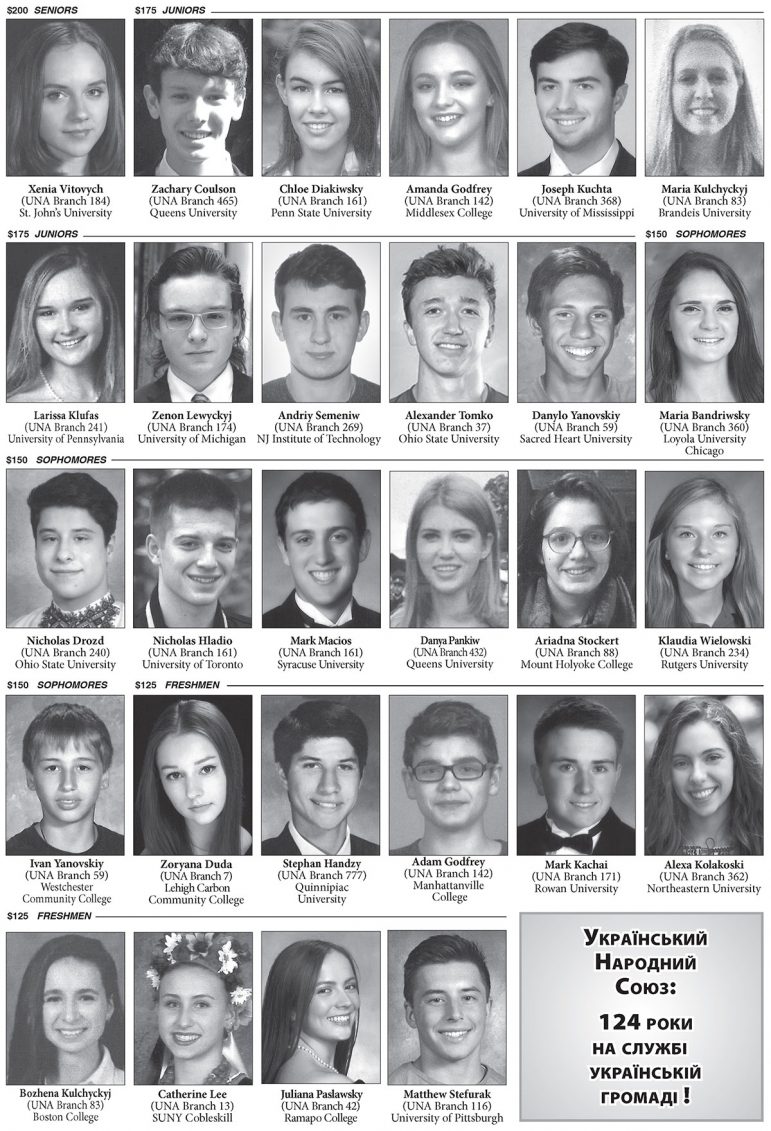