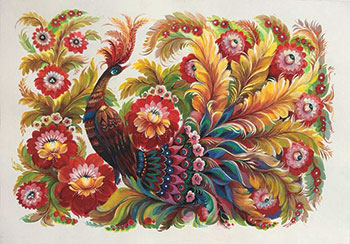 Yuri Mischenko
“Sunrise Firebird” by Iryna Kuzmytska, one of the Petrykivka artists whose works will be featured.

WHIPPANY, N.J. – “New Dimensions” is an upcoming art exhibit that features two acclaimed contemporary artists, Orest Poliszczuk and Olya Powzaniuk, as well as a collection of artwork from several artists in the Petrykivka style.

The exhibition and sale will take place on Sunday, October 14, from 12:30 p.m. to 4 p.m. at the Ukrainian American Cultural Center of New Jersey (UACCNJ) in Whippany and is sponsored by Branch 75 of the Ukrainian National Women’s League of America.

Visitors will have the opportunity to “meet and greet” Mr. Poliszczuk, who will be available to discuss his artwork and artistic direction. Natalia Pawlenko, who represents a group of Petrykivka artists from Ukraine and who will be displaying their work, will also be present during the showing to answer questions about the artists and Petrykivka history.

Mr. Poliszczuk is a well-known Ukrainian American artist from the Baltimore area. After obtaining his undergraduate and master’s degrees in fine art, he pursued teaching at the college level while developing his interests in sculpture as well as painting. In the past 50 years, Mr. Poliszczuk has exhibited extensively in galleries and museums throughout the United States and Canada, most recently in the Philadelphia area at the Ukrainian educational and Cultural Center. His one-person shows include an exhibit at the Ukrainian National Museum in Chicago and the Ukrainian Institute of America in New York City.

Mr. Poliszczuk’s art themes range from graceful pastoral landscapes, still-lifes and animals to a variety of Ukrainian-themed painting. The works to be exhibited in the “New Dimensions” exhibit will be predominantly in gouache and photo-silkscreen media.

Ms. Powzaniuk started her career in art at the Ukrainian Art Institute in Philadelphia, where she took workshops in drawing, woodcarving, watercolor and lithography. When her artistic focus turned to pastels, she studied with master pastellists in the United States and abroad. In addition to her studio work, Ms. Powzaniuk also paints “en plein air” (in the open air), where the artist captures landscapes and views in natural light.

Her art is notable for the impressionistic use of soft colors and shimmering light on a variety of themes, including Ukrainian landscapes, cityscapes and abstracts, as well as commissioned portraiture. Ms. Powzaniuk, who now resides in Basking Ridge, N.J., has received a number of awards for her work, including first place for one of her pastels in the 2018 Tinicum Arts Festival in Pennsylvania. She is an active member of several pastel societies and national art organizations.

Petrykivka is a Ukrainian folk-art painting style that originated from the village of Petrykivka in the eastern Dnipropetrovsk Oblast of Ukraine, where it was traditionally used to decorate house walls and everyday household items. Marked by vibrant colors, exuberant curves and inherent symbolism, Petrykivka was mostly unknown to art ethnographers until the beginning of the 20th century when it was “discovered” in villages along the Dnipro River valley.

Since then, Petrykivka art has enjoyed a resurgence of interest in and outside Ukraine, such that in 2013 the intergovernmental Committee for the Safeguarding of Intangible Heritage added the Petrykivka art form to its list of Intangible Cultural Heritage of Humanity in recognition of its value as an indigenous folk art. More than 10 Petrykivka artists will have their works presented at the “New Dimensions” exhibit.

Visitors to the exhibit will be hosted in the traditionally gracious style of UNWLA Branch 75, with champagne cocktails, a light lunch, hors d’oeuvres, tasty sweets and coffee.

For more information readers may e-mail Marta Popovich at popovichmarta@gmail.com or call 908-759-1771.