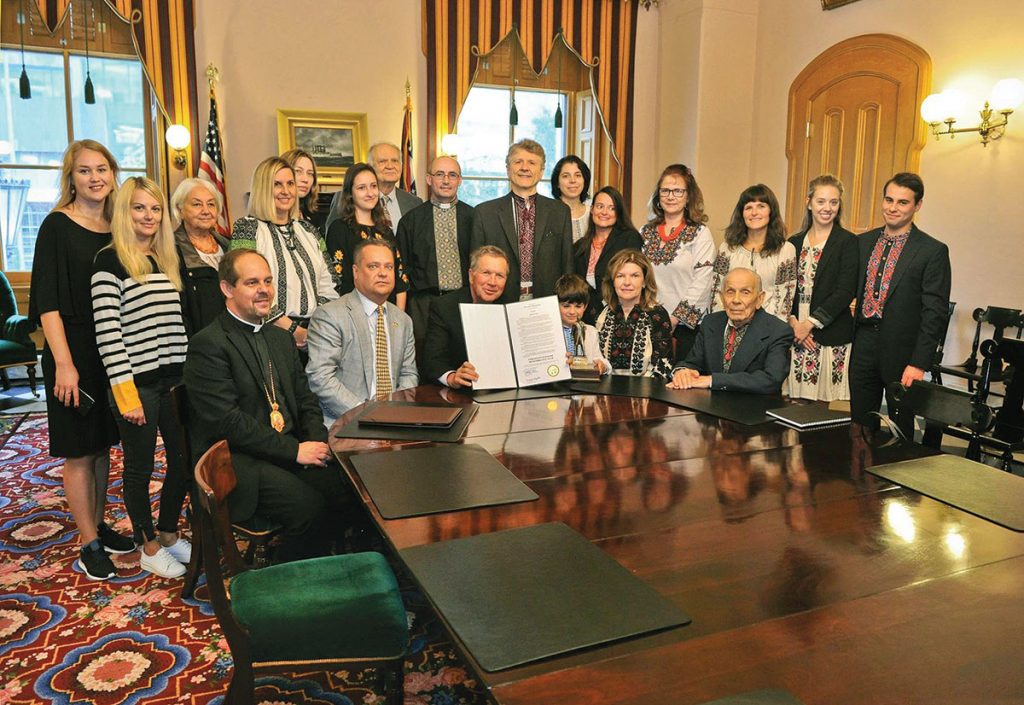 Established in 1962, the award named in honor of Ukraine’s poet-laureate and national hero Taras Shevchenko is bestowed upon individuals who have displayed a remarkable understanding and given substantial assistance to the Ukrainian American community and the Ukrainian people. Previous Ohio honorees include U.S. Sen. Rob Portman (R-Ohio).

The governor also presented the community representatives with the Ukrainian Genocide Remembrance Year resolution, which he signed on June 27. The Ukrainian government has designated the year of 2018 as Ukrainian Genocide Remembrance Year, marking the 85th solemn anniversary of the Holodomor specifically designed by the Soviet regime to punish independent-minded Ukrainians for their resistance to its economic, political and social oppression.

Eighty-five years ago, Soviet dictator Joseph Stalin and his totalitarian regime committed an act of genocide through the implementation of an engineered famine, confiscating land, grain and animals from the Ukrainian people resulting in the deaths of approximately 5 million to 10 million innocent men, women and children and countless others whose names are lost to history.

Gov. Kasich, a Republican, has a long-established record of support for the Ukrainian American community, as well as for the independence and territorial integrity of Ukraine. He has been a strong voice and advocate for providing Ukraine with defensive lethal weapons and giving Ukraine the assistance it needs to defend itself from Russian aggression and the Russian invasion.

He has also been a strong voice against the illegal annexation of Crimea and for continued strong sanctions against Russia. He remains engaged with the ongoing political, economic and military developments.