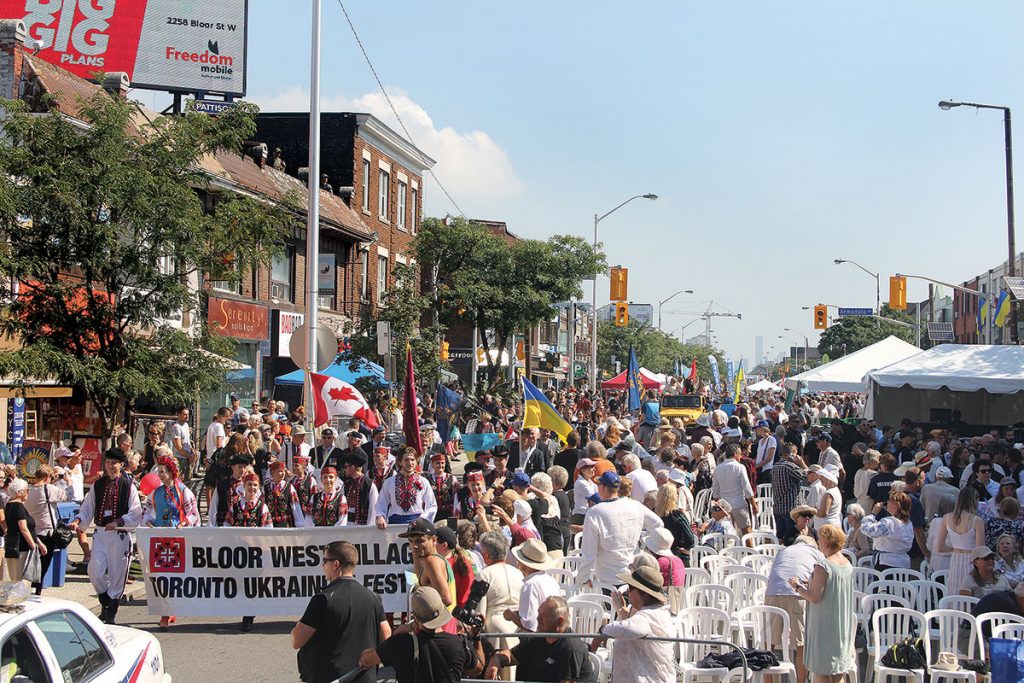 TORONTO – This city welcomed the 22nd annual Bloor West Village Toronto Ukrainian Festival on September 14-16. This year’s Festival had a record number of street vendors – 89 – and had some firsts – a rock musical, “Got To Be Free” as the feature performance and a varenyky-eating contest by Pelmen Foods.

“Got To Be Free” featured a live rock band, bright visual effects, interactive scenography and such noteworthy cast members as the chairman of a Ukrainian commercial bank, Volodymyr Lavrenchuk, and a Canadian lawyer, director of the Investment Support Office with the government of Ukraine, Danylo Bilak.

This year’s festival headliner was ROCK-H, a rock band from Uzhhorod, a Ukrainian city on the border with Hungary. ROCK-H sings in local Transcarpathian, or Zakarpatsky, dialect, and their name in that dialect means “group” or “gathering.” The band members call their style “Pidkarpatsky rock,” which reflects the Zakarpattia region’s folklore with its polygonal melodies.

Every year the festival devotes specific attention to enhance tourism and cultural travel to various regions of Ukraine. This year the focus was on Lemkivshchyna in the westernmost areas of Ukraine. The Lemko cultural exhibit and photobooth were organized by the Canadian Lemko Association. The headliners ROCK-H were specifically selected because of their Lemko-flavored crossover music, which enhanced the overall theme of travel to Lemkivshchyna.

The 2018 festival parade’s honorary marshal was Michael Bociurkiw, a global affairs analyst, writer and speaker. He is a contributor to CNN.com and a regular on BBC World News, CNN International and Al Jazeera. Mr. Bociurkiw is a Ukrainian Canadian, he has devoted many years of work in Ukraine, most recently as spokesperson for the Special Monitoring Mission to Ukraine of the Organization for Security and Cooperation in Europe.

Prime Minister Trudeau also actively visited the festival’s cultural pavilions, met up with the Ukrainian Credit Union’s CEO Taras Pidzamecky and greeted the audience on behalf of the Canadian government at the main Northland Power Festival Stage. He underscored the Canadian government’s solidarity with Ukraine against the Russian military aggression.

The Pelmen Perogie/Varenyky Eating Contest was held at different times throughout the three festival days. The winner managed to eat 20 perogies in a record 1 minute, 29 seconds.

The festival’s committee underscored that members of the Ukrainian Canadian and wider community are welcome to submit their ideas to make next year’s festival a new and unique experience. Organizers may be reached via the festival’s website at www.ukrainianfestival.com.