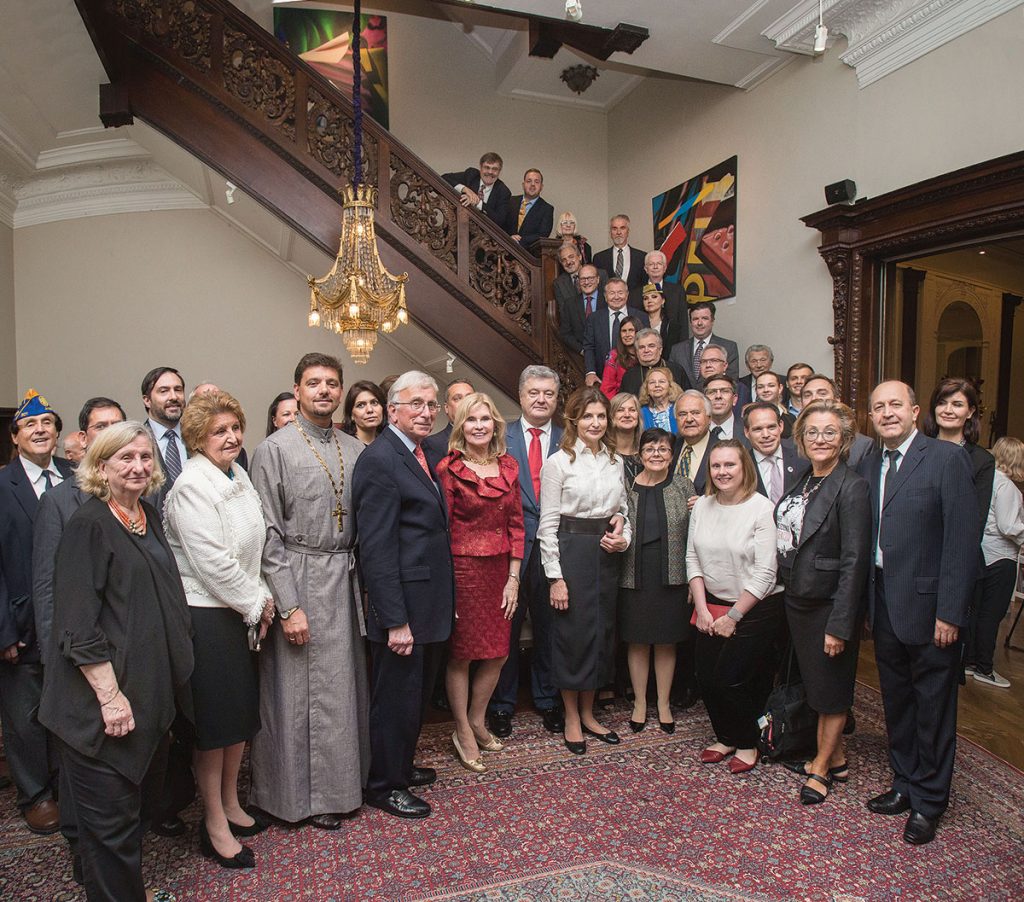 The Presidential Administration of Ukraine
President Petro Poroshenko and First Lady Maryna Poroshenko (center) are greeted by the Ukrainian community at the Ukrainian Institute of America in New York.

NEW YORK – On Tuesday, September 25, the Ukrainian Congress Committee of America (UCCA), the largest representation of Americans of Ukrainian descent, welcomed the President of Ukraine, Petro Poroshenko, and Maryna Poroshenko, the First Lady of Ukraine, following the arrival of the presidential delegation to New York City on the occasion of the 73rd General Assembly of the United Nations.

Upon their arrival, Mr. and Mrs. Poroshenko were greeted at the door by UIA Board President Dr. Daniel Swistel and UCCA President Andriy Futey. Following their entrance to the great hall, the combined singing voices of the attendees resonated over the recording of the Ukrainian anthem that accompanies President Poroshenko at his official visits.

Tamara Olexy, director of UCCA’s National Office and the organization’s immediate past president, took to the podium first, both to welcome the attendees as well as to present the first speaker, Mr. Futey, who devoted the majority of his remarks to impressing upon the presidential delegation the important work of the Ukrainian diaspora, including by those storied organizations present in the room, both historically as well as in just the last four years, since the Revolution of Dignity began. “It is because of the devoted and proactive work of our local communities, our organizations and indeed the entire united organized Ukrainian diaspora, that both the House of Representatives and U.S. Senate have passed significant resolutions and legislation in support of Ukraine,” Mr. Futey said. Prior to ceding the microphone to Mr. Poroshenko, Mr. Futey took the opportunity to have the assembled guests be the first to wish President Poroshenko a happy birthday, with the calendar having already switched to September 26 in Mr. Poroshenko’s native Ukraine.

President Poroshenko humbly accepted the warm birthday wishes, and expressed a sincere appreciation on behalf of the people of Ukraine for the efforts of the Ukrainian community in the U.S., specifically those which have directly led to a greater recognition of the Holodomor of 1932-1933 as a genocide of the Ukrainian people.

“We must tell the truth. The truth about the Holodomor. The horrible events of 1932-1933 left a dreadful imprint in the Ukrainian soul,” said the president. “I greatly thank all of you who have made tremendous efforts to ensure that now 12 states officially recognize this tragedy as a genocide.” The president also specifically thanked the Ukrainian Congress Committee of America for its leadership in this regard.

President Poroshenko proceeded to personally bestow state honors upon several invited guests. Washington State Senator Mark Anthony Miloscia (R – Federal Way) was awarded the Order of Merit of Ukraine (“Orden Za Sluhy”) for his leadership in Washington State to recognize the Holodo-mor as genocide against the Ukrainian people. Home to the fifth largest Ukrainian American population in the United States, the Washington State Senate passed SR8663 “Remembering the Holodomor” in May of 2017.

Bestowed to women for “personal merits in state, production, scientific, educational, cultural, charity and other spheres of social activities,” the Order of Princess Olga (“Orden Kniahyni Olhy”) was presented by Mr. Poroshenko to the longtime curator and librarian of the Ukrainian Museum and Library of Stamford, Conn., Lubow Wolynetz.

President Poroshenko also presented the Order of Merit to Mr. Futey, for his many years of service promoting Ukraine both within and outside of the organized Ukrainian community he represents, as well as helping to strengthen U.S.-Ukrainian bilateral relations.

Following the presentation of awards, President Poroshenko, the First Lady, as well as Mr. Futey and Dr. Swistel, proceeded through the anteroom to view the new multilingual plaque (inscribed in English, Ukrainian, Hebrew, and Yiddish) unveiled on September 20, which honors Dr. Raphael Lemkin, the “father of the U.N. Genocide Convention,” on the 65th anniversary of his New York City speech in which he explicitly acknowledged the Holodomor of 1932-1933 as the “Soviet genocide.”

After a moment of silence was held, Mr. and Mrs. Poroshenko, Mr. Futey and Dr. Swistel all lit candles to honor the memory of the millions of innocent victims of the Holodomor. Earlier that month, the Ukrainian World Congress (UWC), together with its partners – the Ministry of Foreign Affairs of Ukraine, Ukrainian Institute of National Remembrance and the National “Holodomor Victims Memorial” Museum – launched the international action “Light a Candle of Remembrance!” to mark the 85th anniversary of the genocide of the Ukrainian people; over the following 85 days, a candle will be lit daily in a different part of the world uniting Ukrainians and friends of Ukraine in remembrance of the innocent victims of the genocidal policy of the Stalin regime, while raising awareness of the issues of human rights, respect and tolerance.