KYIV – In an open letter and official guidance on the correct spelling and usage of Ukrainian place names, Ukraine’s Ministry of Foreign Affairs stated, “In accordance with the 10th United Nations Conference on the Standardization of Geographical Names, we politely request all countries and organizations to review and where necessary, amend their usage of outdated, Soviet-era place names when referring to Ukraine.

The MFA noted: “Ukraine has been an independent sovereign nation for more than 27 years, but the Soviet-era versions of many geographic names stubbornly persist in international practice. The transliterations of the names of cities, regions and rivers from the Cyrillic alphabet into Latin are often mistakenly based on the Russian form of the name, not the Ukrainian.”

The ministry said the following are the most misspelled names: 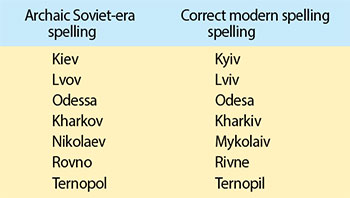 In addition, the MFA underscored that the proper name of the country is Ukraine, not “the Ukraine.”

“Under the Russian empire and later the Union of Soviet Socialist Republics (USSR), Russification was actively used as a tool to extinguish each constituent country’s national identity, culture and language. In light of Russia’s war of aggression against Ukraine, including its illegal occupation of Crimea, we are once again experiencing Russification as a tactic that attempts to destabilize and delegitimize our country. You will appreciate, we hope, how the use of Soviet-era place names – rooted in the Russian language – is especially painful and unacceptable to the people of Ukraine,” the ministry wrote.

To better inform the international community about the correct forms of Ukrainian place names and to avoid mistakes, the MFA has launched the campaign  #CorrectUA.

“Your support in helping to ensure that the correct, internationally agreed place names for Ukraine are adopted in your organization is greatly appreciated,” the ministry concludes in its open letter, which has been posted on its website (see https://mfa.gov.ua/en/page/open/id/5418). The website also provides useful resources for transliteration, spelling rules and pronunciation of Ukrainian toponyms.