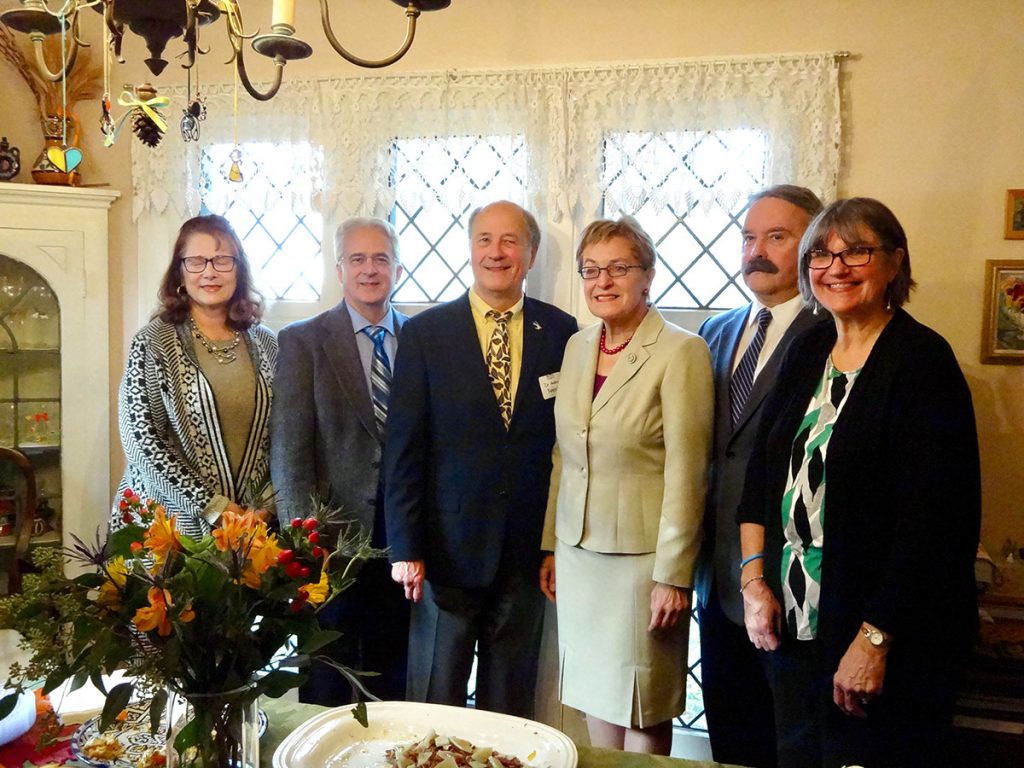 ROCKY RIVER, Ohio – Ohio Congresswoman Marcy Kaptur founded the House Caucus on Ukraine and is currently one of its co-chairs. For decades, she’s been the leader on initiatives to support Ukraine, visiting the country at least two dozen times and welcoming countless delegations to her office over the years.

On Sunday, October 21, the Ukrainian American community members in Cleveland showed their appreciation by hosting a fund-raiser for the congresswoman at the home of Andrew and Chrystia Fedynsky in Rocky River. More than 50 people came to greet Rep. Kaptur and make donations to support her re-election campaign. The host committee included the Fedynskys, as well as Taras and Midge Szmagala, Andrew and Ruta Ripecky, and Marta and Sean Kelleher.

Dr. Ripecky, president of the Ukrainian Medical Association of North America, praised Rep. Kaptur for her support for medical assistance to Ukraine for military personnel wounded in action against Russian forces in the Donbas and Luhansk regions.

Dr. Maria Strus welcomed the congresswoman on behalf of the United Ukrainian Organizations of Ohio and noted her long-standing efforts on behalf of Ukraine.

Mr. Fedynsky welcomed the guests and noted that Rep. Kaptur, who began her tenure in the House in 1983 when she played a leadership role to create the Congressional Commission on the Ukraine Famine, is the longest-serving woman in the House of Representatives in U.S. history. That would not be so significant, he said, if she weren’t also among the most effective U.S. leaders in the past generation.

In his introduction, Mr. Fedynsky acknowledged several attendees: Rocky River Mayor Pamela Bobst; retired Congresswoman Mary Rose Oakar (“my former boss,” he said); Taras Szmagala, director emeritus of the Ukrainian Museum-Archives (UMA) and long-time activist of the Ukrainian National Association; and Vasyl Liscynesky, long-time president of the United Ukrainian Organizations of Ohio. He also thanked his wife, Chrystia, sister-in-law Ruta Ripecky, their cousin Oka Hrycak and UMA Curator Aniza Kraus for preparing a delicious buffet. Mr. Fedynsky noted that the fund-raiser was a Ukrainian initiative but several others outside the community, having learned of the event, joined in support.

In her remarks, Rep. Kaptur spoke about Ukraine and the progress the country has made and challenges it still confronts. She also brought in other issues relevant to her widespread district which spans the Lake Erie shore from Toledo to Cleveland and south into Parma: water quality, health care, infrastructure, nuclear weapons, business development, etc.

Rep. Kaptur mingled with the group before and after her remarks, taking in comments and posing for photos. The fund-raiser was a rousing success raising nearly $20,000 for the congresswoman’s re-election.