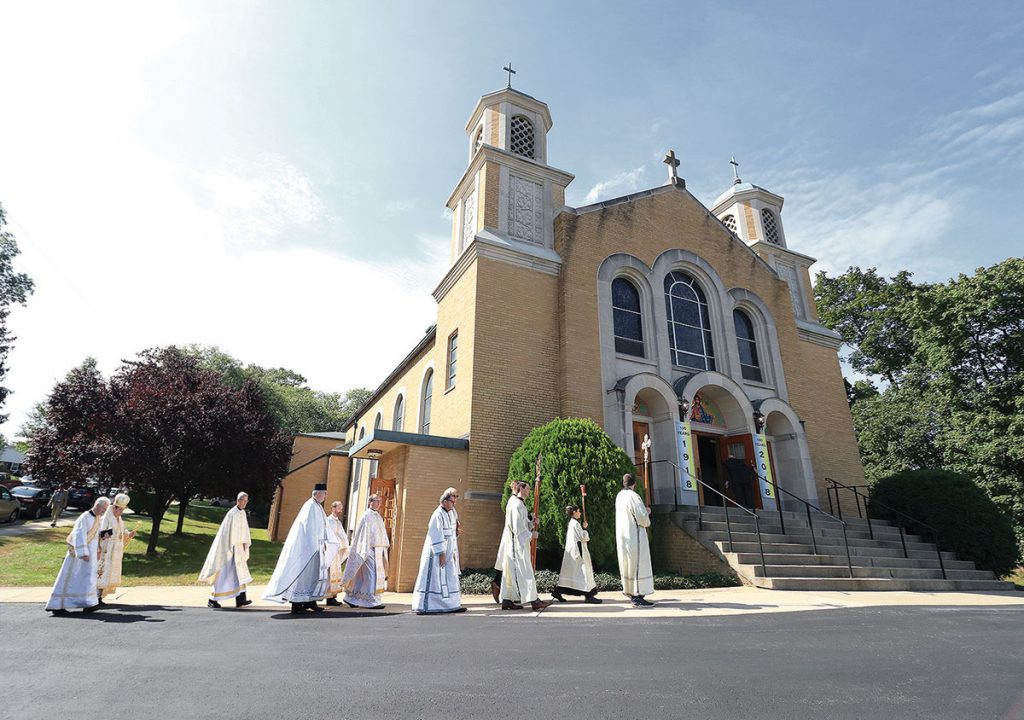 BETHLEHEM, Pa. – The parishioners of St. Josaphat Ukrainian Catholic Church in Bethlehem, Pa., together with their pastor, the Rev. Archpriest Daniel Gurovich, on Sunday, September 30, celebrated the 100th anniversary of their church.

The celebration started with a divine liturgy at 2 p.m., officiated by Bishop Andriy Rabiy, apostolic administrator of the Ukrainian Catholic Archeparchy of Philadelphia. Serving with the bishop were Father Gurovich and eight pastors from neighboring Ukrainian parishes.

After the service, the congregation met at the Palace Center, in nearby Allentown, Pa., for a banquet with a program celebrating the church’s long history. Welcoming the guests was Michael Zagowoski, chairman of the 100th anniversary committee, who introduced Jerry Kindrachuk, as the toastmaster who led the program throughout the evening.

Other remarks were offered by the Rev. Deacon Michael Waak from the Ukrainian Catholic Cathedral in Philadelphia; Dr. Albert Kipa, David Kadingo and Oksana Koziak, all members of St. Josaphat’s Parish; and Maria Flynn, granddaughter of the former pastor, the Rev. Canon Volodymyr Karmazyn.

The program concluded with closing remarks by Father Gurovich and a benediction led by the Rev. Archpriest Daniel Troyan, pastor of Holy Ghost Church in West Easton, Pa.

Many parishioners of St. Josaphat’s Ukrainian Catholic Church trace their origins back to Ukraine of the early 1900s; most were from the Halychyna region of Ukraine.

Halychyna (Galicia) was under the Austro-Hungarian monarchy until 1918. In 1900, 93 percent of Ukrainians earned their living in agriculture and forestry. By 1912, however, 38 percent of the land was owned by the Polish landed proprietors. By 1918, most of the farmers in eastern Galicia owned less than an acre of land. Polish became the official language at the University of Lviv in 1904, and the official language of Galicia in 1907. By 1911, Ukrainians had no schools of higher learning at all. Admission for Ukrainians to universities was mostly denied.

For these reasons, many Ukrainians started immigrating to American shores. Records show that Ukrainian Catholic immigrants began to settle in the Lehigh Valley, and particularly West Easton and Bethlehem, as early as 1900.

By 1910, the Ukrainian population in the Lehigh Valley was increasing rapidly. Between 1910 and 1913, Bethlehem Ukrainians started requesting that something be done for the spiritual welfare of their community. A chapel was rented from a Roman Catholic pastor, and Father Michael Kuziw from Northampton became a visiting pastor. The Bethlehem congregation was designated a mission church until 1918.

Fast outgrowing the chapel, the parish founders, together, with Father Antin Lotowych, located a Protestant church in South Bethlehem and purchased it on April 21, 1918. At the time, there were 50 families and about 30 single persons registered. They immediately decided that St. Josaphat would be the name of their parish. By selecting St. Josaphat, a 17th century Ukrainian bishop, as their patron, they recognized their Ukrainian Catholic roots and culture.

Throughout the 1920s, the parish retained its mission status. Priests were sent to serve the community at irregular intervals. By 1931, the Ukrainian Catholic Exarchate of Philadelphia named the pastor of Holy Ghost Church in West Easton, the Rev. Michael Kolutsky, as pastor of St. Josaphat Church in Bethlehem. With this appointment, St. Josaphat’s was elevated to the status of full parish.

Most of the physical work of the church was completed by the 1940s, and the church membership continued to grow. However, when World War II broke out, many young men and women from St. Josaphat’s answered the call of their country and served in the U.S. Armed Forces. At the end of the war, the church witnessed a dynamic resurgence in community life. The returning servicemen and women soon began to marry and begin families of their own. By 1951, the size of the parish had doubled.

The years 1949-1953 marked the period during which a new wave of immigrants from Ukraine began arriving on American shores. Many of these immigrants began to arrive in Bethlehem. St. Josaphat Church witnessed a renewed vitality and spirit. With the coming of communism, many of these new immigrants had been denied the opportunity to practice their faith in Ukraine; they were only too anxious to attend church services, pray and participate in the various social activities.

Recognizing the quick growth and spiritual resurgence in the parish, the diocese assigned a full-time resident pastor, the Rev. Eugene Cehelsky, in 1949. Most of the immigrants settled around the church, and the church became the hub of their spiritual and cultural life.

Father Cehelsky brought on Hnat Balaziuk as cantor, who like Father Cehelsky was a recent immigrant with a wealth of knowledge and experience in the customs and culture of the Ukrainian people. Under Father Cehelsky’s direction, the parish began the Apostleship of Prayer and the parish grew to such an extent that two divine services were required each Sunday. Father Ivan Mychajliw was brought in as assistant pastor.

In early 1957, Father Cehelsky retired from his priestly duties. The congregation at this time was starting to outgrow the church building. The Rev. John Bobyock, the curate from St. John the Baptist Ukrainian Catholic Church in Northhampton, was named the new pastor of St. Josaphat’s. It was through Father Bobyock that the seeds and idea for a new church were planted.

Father Bobyock got the young parishioners involved. He initiated the Young Ladies Auxiliary for the ladies and the Holy Name Society for the men. Together, these two groups plunged into fund-raising activities with one goal in mind: to build a new house for the community known as St. Josaphat Ukrainian Catholic Church.

But tragedy struck in July 1958, as Father Bobyock suddenly passed to eternal rest. The church mourned his passing, but the parishioners continued to nurture the seed he had planted of building a new church.

In the early part of 1959, the archeparchy sent the Rev. Volodymyr Karmazyn to serve as the new pastor. Father Karmazyn had immigrated from Europe with his family in 1950. He held numerous assignments in the United States, including pastorates in North Dakota. He was a learned scholar with an extremely well-rounded European education. He instilled in the people a love for the rich heritage that was theirs.

Upon his arrival, Father Karmazyn plunged into the various church activities initiated by Father Bobyock. He delegated greater responsibility to the Ladies Auxiliary, the Ukrainian National Women’s League of America and the Holy Name Society, and aimed their activities towards the purchase of property and construction of a new church.

The parishioners’ prayers would soon be answered. The Bethlehem Steel Corp. had undertaken an expansion project and became interested in the purchase of the area known as the “Heights,” where St. Josaphat’s Church stood. With the sale of the old church, a new property was purchased at Union Boulevard and Kenmore Avenue. A building fund was established, and a loan was taken from the Providence Association of Ukrainian Catholics.

The years of hard work had resulted in many spiritual and physical fruits at St. Josaphat’s Church. In 1986, after 27 years of service, Father Karmazyn requested to retire from his priestly duties. In November 1986, Archbishop-Metropolitan Stephen Sulyk granted his request and assigned the Rev. Gurovich as the new pastor.

Upon his arrival, Father Gurovich placed great emphasis on the youth of the Church. In order to promote the notion of the “Christian Family,” Father Dan, as he is called, instituted adult education classes. He also instituted the Total Eastern Christian Formation Program for Grades 1 through 12. Also during his tenure, a complete renovation of the interior of Church according to the traditions of the Ukrainian Catholic Church was completed.