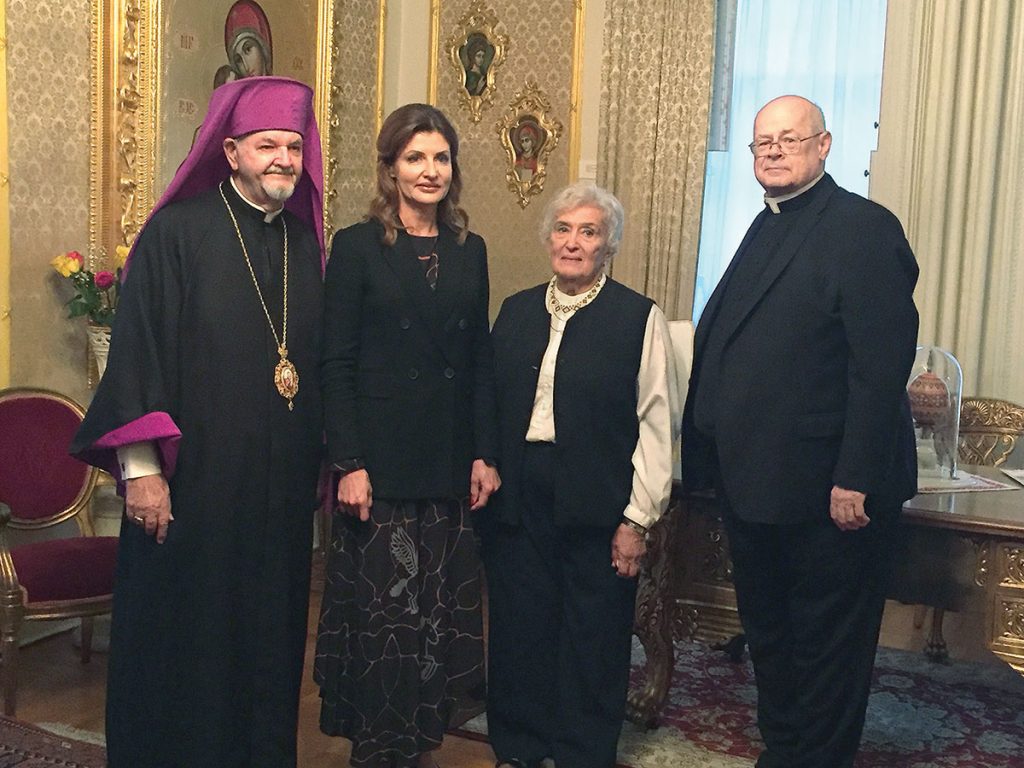 Ukrainian Museum, Stamford
At the Ukrainian Museum in Stamford, Conn., during a visit by the first lady of Ukraine, (from left) are: Bishop Emeritus Basil Losten, Maryna Poroshenko, Lubow Wolynetz and Msgr. John Terlecky.

Mrs. Poroshenko’s trip to Stamford was part of the working visit of President Petro Poroshenko to the United States to attend the opening of the 73rd session of the United Nations General Assembly in New York City.

The first lady viewed the permanent exhibits of folk art, fine art and religious art housed at the museum as well as a special exhibition titled “Ukraine’s Struggle for Freedom, 1917-1921.” The latter commemorates the centennial of Ukraine’s first brief period of modern independence in the closing years of World War I and is subtitled “For Independence, for Unification, for Statehood.”

At the conclusion of the tour, Dr. Poroshenko commented:  “I can see that this cultural institution was created and supported by individuals who love Ukraine, respect its people and value Ukrainian history and art.”

At the end of the visit, gifts of books and art work were exchanged between Dr. Poroshenko and the Ukrainian Museum, and a group photo was taken to commemorate the occasion.

That evening, during a ceremony at the Ukrainian Institute of America, located on Fifth Avenue’s “Museum Mile,” President  Poroshenko bestowed  the Order of Princess Olha, 3rd degree on Ms. Wolynetz, curator and archival librarian at the Ukrainian Museum and Library of Stamford,  for her “contributions to preserving and encouraging interest in Ukrainian culture and folk arts in the United States.” The Order of Princess Olha is a Ukrainian civil decoration, bestowed on women for personal merits in cultural or other spheres of social activities.

The Ukrainian Museum and Library of Stamford, established in 1937, is the oldest cultural institution of its kind founded by Ukrainians in the United States.  Located on the grounds of the former  Quintard Estate, it houses a large collection of Ukrainian folk, religious and  fine arts, as well as a vast library.

The current special exhibit on the 100th anniversary of Ukraine’s first declaration of independence on January 22, 1918, which attracted such interest from First Lady Maryna Poroshenko,  draws upon the museum’s  various archival holdings, including rare materials about the famous Ukrainian Sich Riflemen (Sichovi Striltsi). It will be on display until the end of the year.