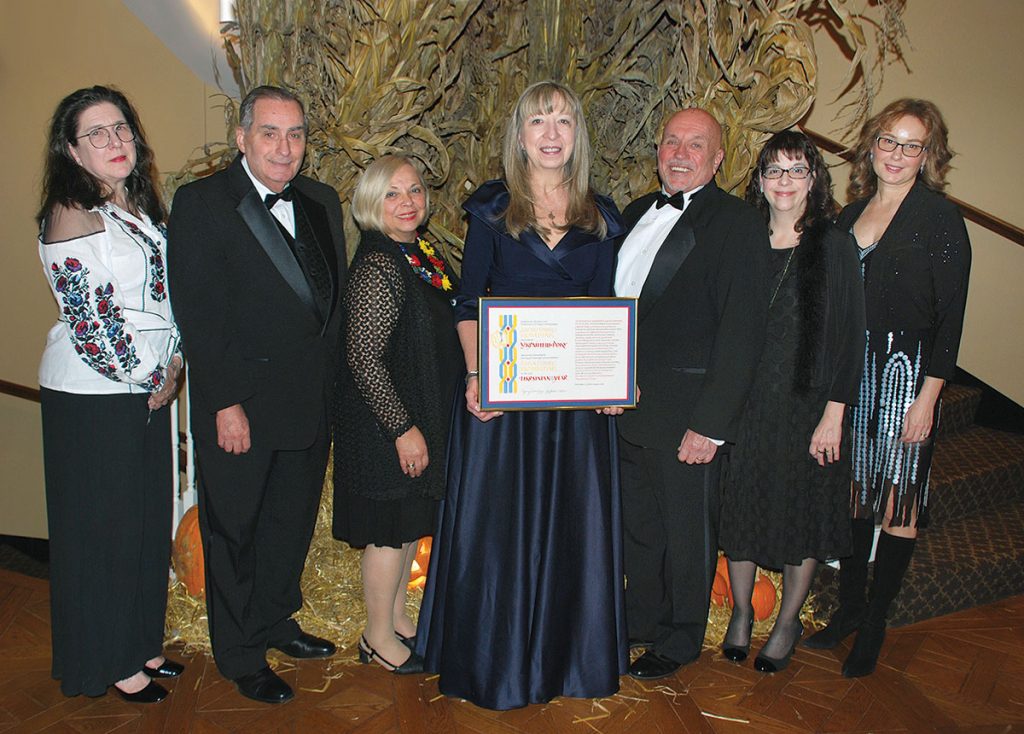 PITTSBURGH – The Ukrainian Technological Society (UTS) of Pittsburgh held its 48th annual dinner-dance on Saturday, November 3, at The Club at Nevillewood in Pittsburgh and presented its 2018 Ukrainian of the Year Award to Daria Pishko Komichak.

Ms. Pishko Komichak was honored for her 40 years of professional accomplishments in engineering, financial evaluation and portfolio management in the power industry; her lifelong service to the Ukrainian Orthodox Church of the U.S.A. and the Ukrainian Orthodox League; and her dedication to raising awareness about Ukraine and Ukrainian culture, particularly her work as executive secretary of the U.S. Committee for the Ukrainian Holodomor-Genocide Awareness.

In his welcoming remarks, UTS Executive Board President George Honchar noted that the society is one of the longest continuously active Ukrainian organizations in the tri-state area and is an organization of Ukrainian professionals and businesspersons interested in cultivating Ukrainian culture and social awareness, and strengthening the Ukrainian community through active participation and leadership. He also highlighted the society’s longstanding commitment to promoting education through higher learning and pointed to the society’s scholarship program – now in its 46th year – which has awarded over $220,000 to deserving students since its inception.

Prior to the start of the program, Mr. Honchar called for a moment of silence to remember the victims of the Tree of Life Synagogue tragedy, which occurred just one week prior in the Squirrel Hill neighborhood of Pittsburgh.

In his nominating address at the presentation ceremony, Nickolas C. Kotow, secretary of the society’s Executive Board, detailed Ms. Pishko Komichak’s impressive biography. Born in Monessen, Pa., she was always active in her church and her Ukrainian community. After earning a Bachelor of Science degree in civil engineering and engineering and public policy from Carnegie Mellon University in 1979 and an M.B.A. from the University of Connecticut in 1984, she began a career as a project manager with AT&T Capital Corp. She joined DZ Bank AG in New York in 1989 and is currently responsible for the portfolio management of multi-million dollar projects.

Ms. Pishko Komichak has been a delegate to the Sobor of the Ukrainian Orthodox Church of the U.S.A. (UOC-U.S.A.) on numerous occasions and was a member of the Metropolitan Council of the UOC-U.S.A. under the chairmanship of Metropolitan Constantine, of blessed memory. She currently serves on the UOC-U.S.A.’s Financial Advisory Committee and has a leadership role in the Church’s Strategic Plan initiative.

In 2006, the UOC-U.S.A. appointed Ms. Pishko Komichak as its representative on the newly formed U.S. Committee for Ukrainian Holodomor-Genocide Awareness 1932-1933. She has been the committee’s executive secretary since that time. In 2015, the committee assisted the government of Ukraine in erecting a monument in Washington to commemorate the victims of the Holodomor. Ms. Pishko Komichak is a member of the board of trustees of the Ukrainian History and Education Center located in Somerset, N.J., and serves on the executive committee as its treasurer. She has held numerous leadership positions in the UOL and continues to be active in Ukrainian cultural activities, including the Promin Vocal Ensemble of New York.

Upon accepting the award, Ms. Pishko Komichak thanked the greater Pittsburgh community for nurturing her development professionally, culturally and spiritually. She noted that the Ukrainian Orthodox Church and the Ukrainian Orthodox League continue to serve as the foundation of her character. Ms. Pishko Komichak spoke of her professional journey in the fields of engineering and finance, and her desire to balance her personal ambitions with her calling to serve her Ukrainian community and church.

As she achieved her professional goals, she was also presented with opportunities to become even more engaged with her Ukrainian culture. Ms. Pishko Komichak spoke of her assignment to serve as the UOC-U.S.A. representative on the newly formed Committee for Ukrainian Holodomor-Genocide Awareness 1932-1933. She cited her work on this committee as another way to give back to her Ukrainian community while using her finely honed professional skills.

Ms. Pishko Komichak had a simple parting message for all the students in attendance: “Follow your calling, thank God for your blessings and give back to your community – the rewards are endless.” Following Ms. Pishko Komichak’s remarks, Mr. Honchar invited all present to join in a celebratory “Mnohaya Lita.”

Metropolitan Antony, prime hierarch of the Ukrainian Orthodox Church of the U.S.A. and Diaspora, gave the invocation and the benediction. The Continental Dukes provided music for the evening.