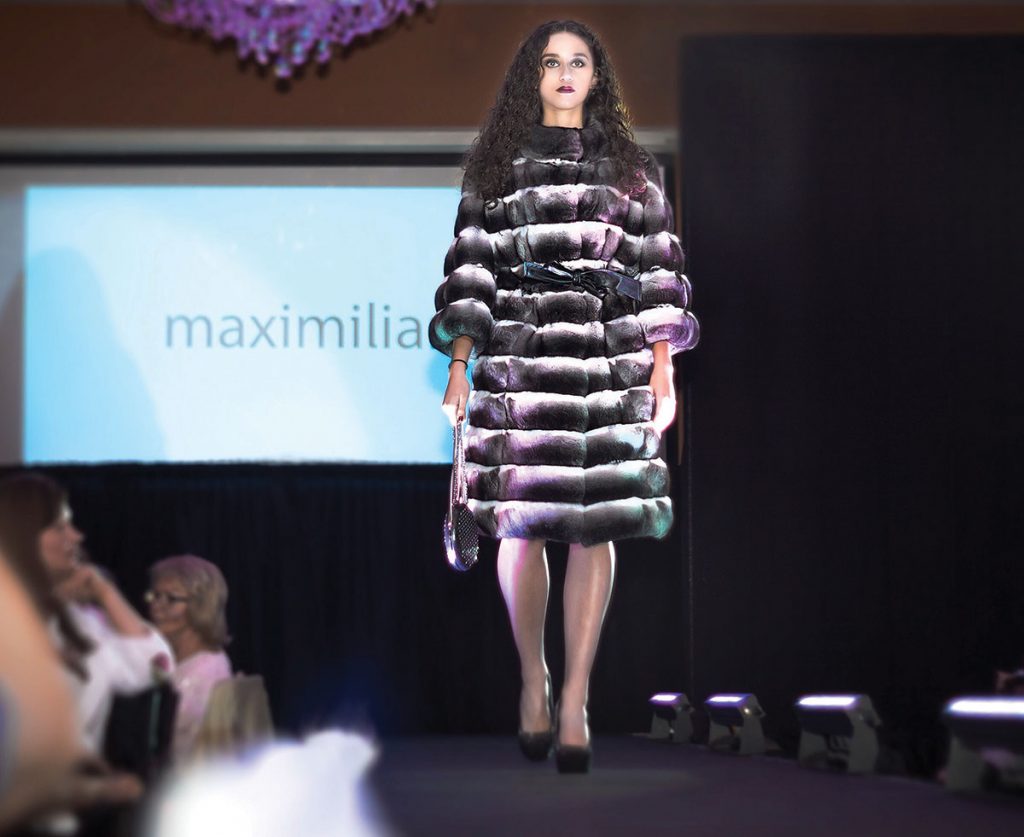 Andrij Korchynsky
A stunning example of chinchilla by Maximilian Furs from Bloomingdale’s.

The show was held in the newly renovated hall on the spacious grounds of St. Michael the Archangel Ukrainian Catholic Church in Jenkintown, Pa., on Saturday, October 20, before a packed audience.

During the opening reception with hors d’oeuvres and cocktails in the lobby, guests had the opportunity to view the one-of-a-kind jewelry and hand-painted icons by Nataliya Stasiv of Lviv and the beautifully crafted scarves in various fabrics designed by Zoriana Sokhatska of Philadelphia. This exhibit was organized by UNWLA Branch 67 as a fund-raiser for The Ukrainian Museum in New York City.

Prior to the start of the show, the attendees enjoyed dinner and perused the program booklet that included information about the UNWLA, biographies of the artists, participants of the program (including the models, many of them members of Philadelphia’s Ukrainian community) and patrons. The fashion show was made possible by the generous contributions made by Ukrainian Selfreliance Federal Credit Union and various other companies and individuals.

With background pulsating music, the models strutted down the runway, creating an enthusiasm for the fashions being shown.

The first part of the couture fashion show was dedicated to the Maximilian coat collection, which featured 54 unique various styles, lengths and fabrics of coats and jackets, including many shearling lamb creations in colors from black and brown to green, gray, pink and some multi-colored versions, as well as mink and fox creations.

The Maximilian Furs establishment originated in Warsaw, Poland, but was forced out in 1939. The furriers settled in New York City and established themselves as trend setters. The collections are now featured in salons within Bloomingdale’s Department Stores.

The Marsha Archer jewelry was worn by the models, both men and women, wearing the fur creations. An internationally acclaimed jewelry designer, Ms. Archer (neé Maria Muchin) was born in Kyiv and immigrated to the United States in 1949 with her parents. She married Charles Archer in Mexico, moved to the Southwest, and later to San Francisco. Her creations reflect her cultural heritage for more than four decades. She uses various semi-precious beads, such as coral, turquoise, and silver, in her necklaces. Her creations have been shown internationally: at the Pecherska Lavra in Kyiv, The Ukrainian Museum in New York, Saks Fifth Avenue stores, the San Francisco Opera House, the Metropolitan Museum and more.

The Tetyana Paliy fashions included more than 60 ensembles for men, women and children. The collection included many beautiful flowing white dresses as well as other colors in lovely fabrics, intricately embroidered with Ukrainian traditional and contemporary designs and often using bold florals and roses in rich colors of red, pink, lavender and purple shades. The designer likes using a cummerbund with the same design to show off the wearer’s waist. Ms. Paliy’s designs have been described as both whimsical and elegant. Some of her designs seemed retro in style, depicting a love of the past. One highlight from the collection was a beautiful wedding gown and wedding shirt for the groom – with Ukrainian embroidery embellished on exquisite fabric.

After the presentations, the guests anxiously waited to review the collections for purchase, with 20 percent of sales going to Ukrainian humanitarian relief to help families in eastern Ukraine affected by the recent crisis.