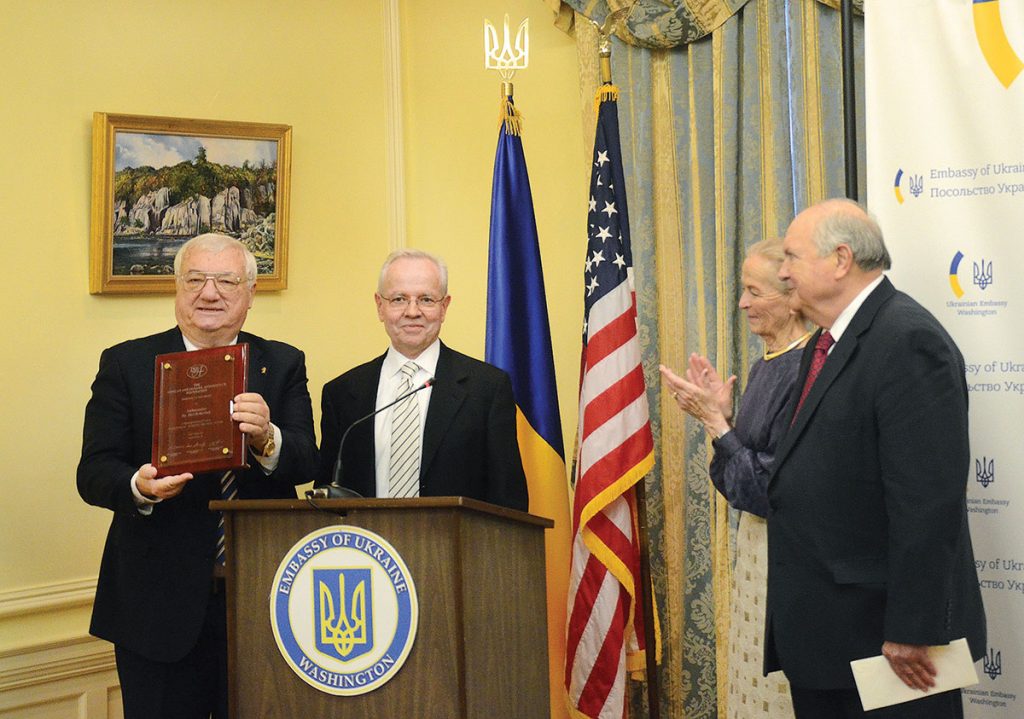 Yaro Bihun
Dr. Yuriy Shcherbak shows the 2018 Omelan and Tatiana Antonovych Foundation Award he just received during the October 20 ceremony at the Ukrainian Embassy in Washington. Standing next to him are foundation board members Andrew Lewycky, Marta Voyevidka and Roman Slonewsky.

WASHINGTON – Yuriy Shcherbak, the Ukrainian scientist, writer, historian, diplomat and politician who spent more than a half a century helping to develop Ukraine into a successful independent country, was thanked and honored for his service with this year’s Omelan and Tatiana Antonovych Foundation award.

The award was presented October 20 in front of a large gathering at the Embassy of Ukraine in Washington, where he had served as post-Soviet Ukraine’s second ambassador from 1994 to 1998.

Welcoming him back to this historic Ukrainian Embassy, the current ambassador, Valeriy Chaly, opened the ceremony by expressing his gratitude to the Antonovych Foundation for recognizing Dr. Shcherbak’s accomplishments and “long-lasting dedicated work” for Ukraine. He noted that two years ago, Dr. Shcherbak was honored by the president of Ukraine with the Order of Freedom for his “significant personal contribution to the building of and social, scientific, economic, cultural and educational development of Ukraine, and for his high professionalism.”

He was Ukraine’s first minister of the environment, founder of the Green Party, researcher and the author of a documentary novel about the Chornobyl nuclear disaster and a dozen other books.
Dr. Shcherbak, along with his wife, Maria, was also praised at the ceremony by William Miller, his contemporary as U.S. ambassador to Ukraine in the 1990s.

“He’s a great man. And I learned much from him and his books,” Ambassador Miller said, pointing out that “his Chornobyl experience was decisive,” that he was the best example of “glasnost” and that the old way of thinking was not acceptable anymore.

Speaking on behalf of the board of directors of the Antonovych Foundation, Roman Slonewsky noted that the annual awards began in 1981, that this was the 10th time the ceremony was being held in the historic building of the Embassy of Ukraine, and that the long list of award recipients represents a broad spectrum of professions – clergy, physicians, journalists, editors, doctors, librarians, historians and statesmen from a number of nations, including Ukraine, America, Britain, Poland, Canada and Italy.

“All of these men and women have one thing in common: that through their work and achievements they helped to promote the study and appreciation of the culture of Ukraine, including its literature, history, religion and humanities – which are all the objectives of our foundation,” Mr. Slonewsky explained.

Before the award was presented to Dr. Shcherbak, the chairman of the Antonovych award nomination committee that recommended him for the award, Dr. Martha Bohachevsky-Chomiak, shared her views about him.

“Today’s awardee is really a special one – a renaissance person of the Ukrainian renaissance, which continues in Ukraine, unlike in its post-Soviet northern neighbor Russia,” she said, adding that “In Ukraine he is known as a writer, but he is a popular writer whose works are being read, in contrast to the classical writers, who are quoted but not read.”

She stressed that Dr. Shcherbak was not getting this award only for his writing. “He’s also known as a civil servant, who sacrificed his God-given writing talent to work on the development of the Ukrainian government service.”

“He is truly a pioneer person,” Dr. Bohachevsky-Chomiak said. “Yuriy Shcherbak established the first genuine political party in Ukraine, the Green Party. …He is not only a diplomat, but a diplomat who is a theoretician, who has thought deeply on the problems of diplomacy, who has written a series of books on the contemporary situation in Ukraine, and who has worked hard to make the name of Ukraine well known in circles where it matters.”

Dr. Shcherbak was receiving this award, she said, “because he is a statesman of the country which he helped build, on the ruins that he and his generation inherited.” As such he deserves that award for not only writing about Ukraine, “but actually building Ukraine, actually creating Ukraine as the modern country that we all know and love.”

As inscribed on the award: “The Omelan and Tatiana Foundation presents its 2018 award to Ambassador Dr. Yuriy Shcherbak, a true renaissance man, humanitarian, physician, diplomat, father.”

“This building, and this room, are associated with the best moments of my life: as the Ukrainian ambassador in this country, when we established our strategic partnership with the U.S.A., the partnership which today is so important to Ukraine,” he said.

“In my opinion, America today is our most important partner in the conflict in Ukraine today. My hope is to see Ukraine as a major NATO ally, and I think that this is our joint hope and intent. And I hope that this will someday come to pass,” Dr. Shcherbak commented.

When he and his wife were serving in Washington, he said, they were building strong relations not only with the United States, but also with the Ukrainian American community that helped Ukraine develop its relationship with this country.

“In this room I met a lot of friends, both Ukrainians and Americans, who helped us create majestic relations of Ukrainian-American friendship,” he said, adding that among them were Omelan and Tatiana Antonovych, who died a few years later and were laid to rest in Ukraine, “but their spirit has also spread in America, where they worked hard to earn what they then dedicated to this good effort.”

“Ukrainians who came to the banks of the United States after World War II did not bring any money with them, but they brought with them the richest treasure – the revolutionary spirit of an invincible Ukraine, the true faith in the independence of Ukraine. They brought along their native language and Christian morality,” the former envoy to the U.S. stated.

And despite all of the difficulties that they had to endure, he added, “they built a spiritual free Ukraine, with an unfalsified history, a free press, museums and archives, academies, foundations, with gleaming scientists.”

As for Ukraine today, he said it is undergoing a difficult time as evidenced in the daily negative news reports in Ukraine about killings, explosions, political scandals, protests and corruption.
“But I am convinced that we will overcome all the chaos that has arisen from this war,” he said.

Before concluding the evening, Ambassador Chaly presented the Embassy’s commemorative watches to Ambassadors Shcherbak and Miller for their work in establishing the U.S.-Ukrainian strategic partnership. He also presented a Ukrainian Academy of Sciences award to Dr. Michael Yarymovych of the U.S. National Aeronautics and Space Administration in the Apollo moon program, for his cooperative work with the Ukrainian Academy of Sciences.

Omelan and Tatiana Antonovych established their foundation in 1980, with the goal of advancing the study of Ukrainian culture. Since then, it has donated about $3 million to help finance the development of many academic and cultural institutions and monuments in Ukraine. Among the projects it has supported are: the reconstruction the National University of Kyiv-Mohyla Academy’s main library, the renovation of the Vasyl Stefanyk Library and Artists Palace in Lviv, and the building of the Boykivshchyna Museum in Dolyna, in western Ukraine, where Omelan Antonovych was born in 1914.

Four years ago, the foundation also provided $100,000 to help finance the building of the Ukrainian Holodomor Memorial in Washington, which was officially dedicated three years ago.

Omelan Antonovych spent his early adult years as a Ukrainian nationalist activist and spent some time as a political prisoner in Polish and Nazi prisons. Later, he received a law degree at the Ukrainian Free University in Prague in 1943. After World War II, he married Tatiana Terlecky, a physician who later became a world-renowned kidney specialist.

After the war, the couple emigrated to the United States, settling in Washington, where Dr. Antonovych worked as a scholar and taught in the capital area medical schools, while Mr. Antonovych focused on ranching and real estate. She passed away in 2001, and he died in 2008.