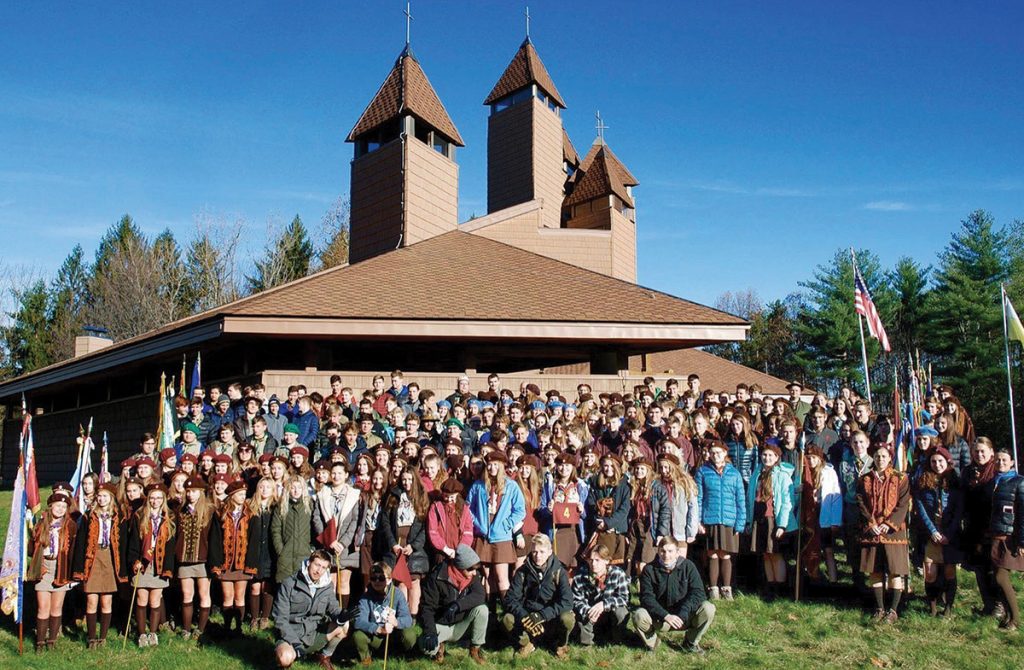 Marta Sawchyn
Participants of the Plast Orlykiada in front of Holy Trinity Ukrainian Catholic Church in Kerhonkson, N.Y., just down the road from Soyuzivka Heritage Center.

KERHONKSON, N.Y. – “To Arms, Striltsi! November Uprising 1918” was the theme of the 56th annual Plast Orlykiada sponsored and organized by the Orlykivtsi Plast fraternity, with help from the Verkhovynky Plast sorority. This year’s competition was headed up by Lida Rezie, the lead organizer of the event, and its commander was Tanya Kosc.

Participants from as far away as Toronto and Chicago gathered at the Soyuzivka Heritage Center on November 10-11 to demonstrate their knowledge of the topic.

Each year, Plast youths from across the U.S. and Canada come to participate in the challenge. This year, 172 scouts divided into 19 teams participated in the competition. A large packet of materials was available to each Plast troop at the beginning of the school year in order to help them prepare for Orlykiada.

The competition is divided into parts: a trivia bowl, theatrical performances and the presentation of exhibits.

In the first competition, teams compete in a three-round trivia bowl. The top four teams from the first round advance to the second round, and then the top two teams advance to the final round.

The second part requires each group to perform a skit; this performance is a way for the group to demonstrate its ability and knowledge on the theme in a creative and often humorous way. This year’s was no exception as the groups tried to outdo each other.

The third and final portion is a display of projects or exhibits that each group creates and assembles prior to the competition.

Overall, Orlykiada gives youths a chance to meet with other Plast scouts and engage in friendly competition.

A separate competition, the selection of a “Hetmanych” and a “Hetmanivna,” takes place early Saturday evening and Sunday afternoon. Each competing group can elect to send one individual to participate in this challenge. Participants get together in a room in front of a group of judges where they are asked to discuss their ideas on various topics about Orlykiada, Plast and Ukraine. On Sunday morning, they answer questions in front of their peers and judges, as their respective groups cheer them on.

This year’s Hetmanivna was Sofia Shyprykevych of Newark, and the Hetmanych was Andriy Shvets of Toronto.

More inform.ation on the winners in each category of the 2018 competition can be found on the Orlykiada website, www.orlykiada.org.