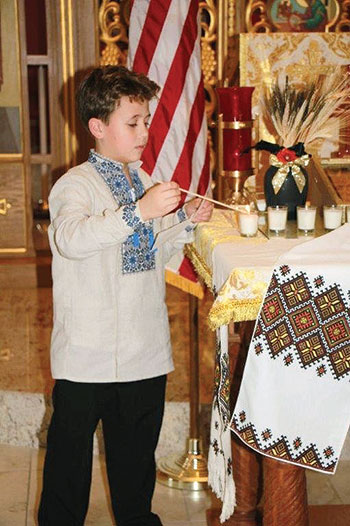 TOMS RIVER, N.J. – On Sunday, December 2, nearly 200 parishioners and guests of St. Stephen Ukrainian Catholic Church attended a moving and powerful commemoration honoring the memory of the millions of victims who died in the 1932-1933 Ukrainian Famine-Genocide, the Holodomor.

To mark the 85th anniversary of the Holodomor, the government of Ukraine and the Ukrainian World Congress launched an international action called “Light a Candle of Remembrance,” in the course of which candles were lit daily in a different part of the world. The action united Ukrainians and friends of Ukraine in remembrance of the innocent victims of the genocidal policy of the Stalin regime, while raising awareness of tolerance and human rights.

The commemoration at St. Stephen’s started with a solemn prayer and lighting of the large “Candle of Remembrance,” followed by a moment of silence offered by Father Volodymyr Popyk, pastor. The choir and congregation then sang “Vichnaya Pamiat” (Eternal Memory).

Master of ceremonies Gerry Tchir welcomed and asked the audience to help raise awareness of the Holodomor-Genocide among friends and associates. After acknowledging the various letters of support from Ocean County dignitaries, Mr. Tchir invited Nadia Nynka, chair of the New Jersey Chapter for Ukrainian Holodomor Genocide Awareness, to give her powerful and moving address. Members in the audience could be seen wiping away tears of compassion for the fallen Ukrainian victims.

Zenia Brozyna then read a letter that contained the memoirs and recollections of those terrible years written by a Holodomor survivor, Nina Pinczuk Kowbasniuk.

In commemoration of the millions of children who perished in the Holodomor, a number of children from St. Stephen Ukrainian Catholic Church read off the names of 85 children who died during this forced starvation. After each set of children’s names was read, a votive candle was lighted to honor their memory.

Yurij Shevchuk led the St. Stephen Choir and congregation in song, “Chuyesh Brate Miy” (Do You Hear, My Brother).

In his presentation, Mr. Tchir underscored the magnitude of the Holodomor, noting that “The Holodomor claimed more lives than were lost on every battle field combined during World War II. Seven to 10 million people, including 3 million children, perished during those 17 months in 1932-1933.”

The Holodomor commemoration ended with the religious hymn “Bozhe Velykyi” (“Prayer for Ukraine”).

Acknowledgments were offered to all who worked in making this special event successful; special thanks were given to Mr. Tchir and his wife, Olga, for initiating and organizing the commemoration at St. Stephen Church.

All were then invited to view the very moving and informative film “Harvest of Despair” in the St. Stephen Community Center.