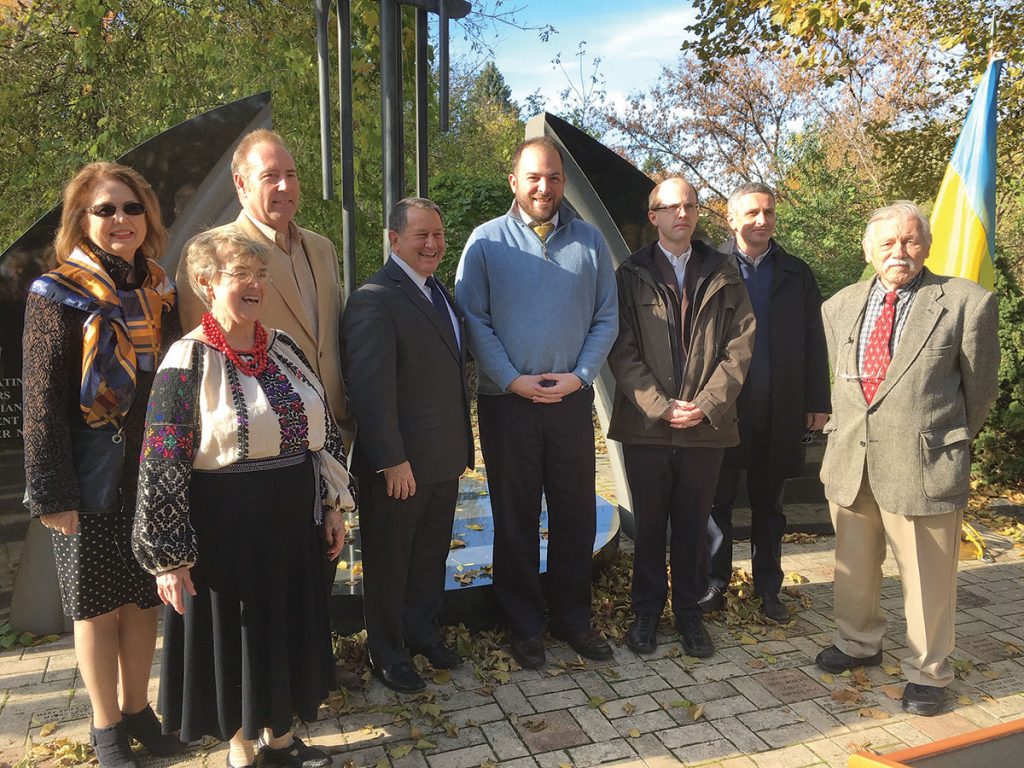 It was also a day for heartfelt recognition of Ukrainian American veterans for their service to their country and for their love of Ukraine, their ancestral homeland. The program closed with a solemn prayer for the victims of the Holodomor.

Next, the supervisor of the Town of Irondequoit, David Seeley, welcomed the guests and spoke of the strong relationship between town officials and members of the Ukrainian Community. It is the town supervisor and his administrators who shoulder responsibility for the upkeep of the Ukrainian Centennial Monument. It was, therefore, pleasing to hear that the town is planning to create a park alongside the monument which will enhance the historic and ethnic significance of this location.

Joseph Morelle, the newly elected congressman who fills the late Rep. Slaughter’s seat, was also an honored guest. As he stepped up to the podium, he acknowledged 27 years of Ukraine’s independence, 100 years of Ukraine’s statehood, the 85th anniversary of the Holodomor and the imminent unification of the Ukrainian Orthodox Church.

Rep. Morelle (D-N.Y.) elaborated on the virtues of both U.S., legislators and referred to Sen. McCain as a true American hero for his suffering as a POW in Vietnam.

New York State Sen. Joseph Robach, a friend of the Ukrainian community in greater Rochester, has participated in many RUG-sponsored Ukrainian Independence Day events. He has also welcomed foreign visitors and exchange students from Ukraine who visited him in Rochester and in Albany. On this occasion the state senator came to honor the memory of both Rep. Slaughter and Sen. McCain.

As the speakers finished their presentations, the participants turned toward the flags. Supervisor Seeley led the assembled in singing ‘The Star Spangled Banner” which was then followed by the singing of the Ukrainian national anthem.

The program continued after all regrouped at the Irondequoit Public Library, also on the grounds of Irondequoit Town Hall. In the Lake Ontario Room, “pampushky” and torte were served at the sweets table decorated by Irena Terlectsky.

The program resumed when Dr. Hoshowky stepped up to the podium to share her personal recollections of the late Congresswoman Slaughter. The most moving experience was when the congresswoman invited three Ukrainian Americans from Rochester to be her guests to witness President Petro Poroshenko of Ukraine address a joint session of Congress. Zorianna Dombchewsky, Vasilij Basiuk and Dr. Hoshowsky were proud to represent the community. Rep. Slaughter was one of the members of the congressional welcoming committee that greeted President Poroshenko as he entered Congress.

As a token of the Ukrainian community’s remembrance, Dr. Hoshowsky presented a handmade card replete with pictures from the Washington trip to Jeffrey Rogers, an assistant to the late Rep. Slaughter, for him to deliver to her family with condolences. Guests were encouraged to sign the card as a last farewell to the congresswoman.

Nataliya Kostiw spoke in Ukrainian about the late Sen. McCain as a staunch advocate for Ukraine. Mrs. Kostiw is a member of the First Slavic Bible Baptist Church – the most recent Ukrainian church to establish itself in Irondequoit.

A tribute to Ukrainian American veterans followed. Dr. Hoshowsky commented on the upcoming Veterans Day, November 11, then recognized several veterans in the room. Anatoly Makohon, a veteran who completed his military service at the German-Czechoslovakian border during the Cold War, was selected this year for the Honor Flight program that takes veterans to Washington for recognition ceremonies as a thank-you for their military service. Veterans Ihor Hoshowsky, Walter Denysenko, Andrij Charambura and Bohdan Cholach were recognized. Bohdan Cholach and his brother Walter Cholach are also former honorees of the Honor Flight Program.

Two Ukrainian veterans who fought in Ukraine for its independence live in Rochester. Olga Cherwinsky, age 95, was accompanied to this event by her friend Luba Bilozir. Jerry Andrushko, 97, has the added distinction of being one of the founding members of the Rochester Ukrainian Group, of which the Ukrainian Centennial Committee of Rochester is a subsidiary.

Tamara Denysenko, president of the Ukrainian American Community Foundation, spoke about the National University of Ostroh Academy-Nazareth College Partnership in Rochester. This program sponsors one student from Ostroh Academy for one semester of study per year. Ms. Denysenko, the fund-raiser, has received donations from the Ukrainian Federal Credit Union/UAC Foundation, the Ukrainian American West-Side Club/Ukrainian Men’s Breakfast Club and Ukrainian National Women’s League of America Branch 120, as well as numerous private contributions.

Dmytro Baida and Kateryna Basiuk each completed a semester of study at Nazareth College. The designated new Ostroh Academy student for 2019 is Anna Hrynkiv. Excitement is now growing for a reciprocal exchange next year. Dr. Nevan Fisher, associate vice-president for global programs, and Dr. Olena Prokopovych, director of the Department of Political Science, both anchor the Ostroh Academy partnership program with Nazareth College.

The last part of the program honored the victims of the Holodomor. Focusing on the difficulties of bringing information about the Holodomor to light, Valentina Makohon noted the denial of the Famine by Walter Duranty. She pointed out that, at the time, British journalist Malcolm Muggeridge and Welsh journalist Gareth Jones provided eyewitness accounts that countered Duranty’s betrayal of the truth of the forced Famine, but their accounts were largely ignored. Jones was subsequently murdered for his staunch determination to document and report on the Stalinist-made Famine. American-Russian sidebar diplomacy at the time precluded the United States from acknowledging the Holodomor while millions of Ukrainians were starved to death, 1932-1933.

Ms. Makohon then touched on the work done by the late Dr. James Mace, executive director of the U.S. Commission on the Ukraine Famine, and identified the seminal work done by the late Dr. Robert Conquest, author of “The Harvest of Sorrow: Soviet Collectivization and the Terror-Famine.” She pointed out how William F. Buckley Jr., who hosted the TV program “Firing Line,” brought media attention and credibility to Conquest’s study of the Holodomor.

Contemporary authors Dr. Timothy Snyder (“Bloodlands: Europe Between Hitler and Stalin”), Anne Applebaum (“Red Famine: Stalin’s War on Ukraine”) and Dr. Stanislav Kulchytsky (“The Famine 1932-1933: An Anatomy of the Holodomor”) strengthen the case of the Holodomor as a genocide perpetrated against Ukraine, Ms. Makohon continued.

She also noted that the journals and diaries about the Holodomor belonging to Jones were recently presented at Cambridge and at the United Nations. The late Nigel Linsan Colley, Jones’s grandnephew, spoke at the opening of the Holodomor exhibit at the U.N.

Dr. Hoshowsky closed the program by inviting the Rt. Rev. Philip Weiner, pastor of St Josaphat Ukrainian Catholic Church, to lead all in prayer in memory of the victims of the Holodomor. He, in turn, asked the the Revs. Volodymyr Dmyterko and Andrij Dwulit to join him. Following the prayer, all sang “Vichnaya Pamiat” (Eternal Memory).