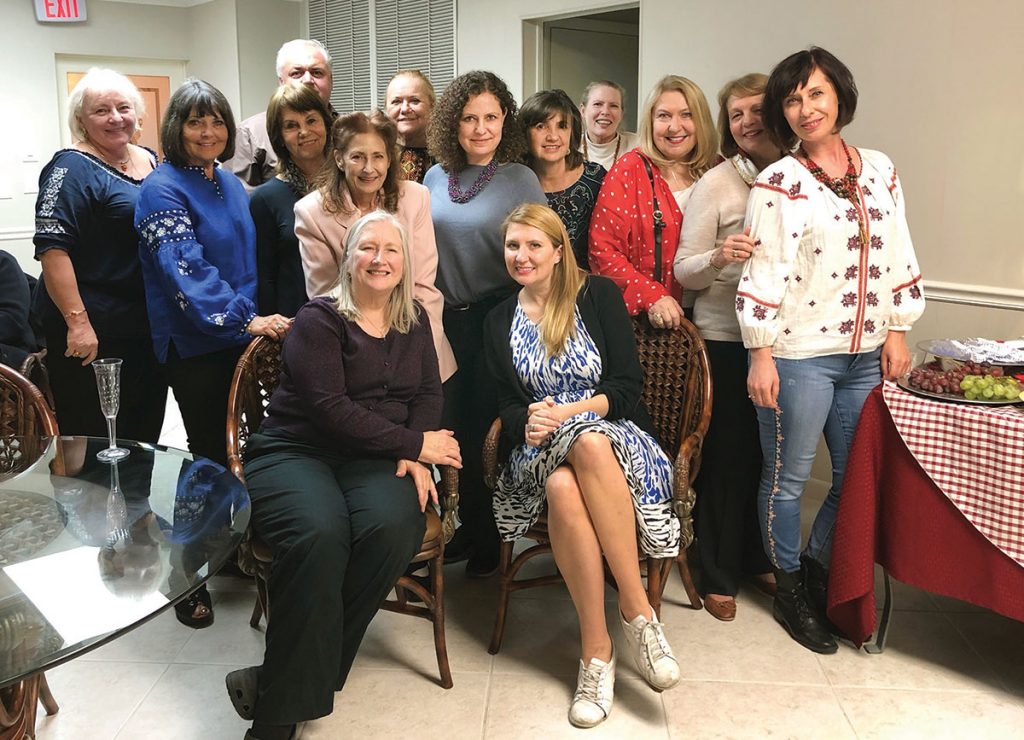 Oksana Piaseckyj
Andrea Chalupa (seated, right) and attendees at her talk on the upcoming film about Gareth Jones.

Ukrainian National Women’s League of America Branch 17 sponsored the event, which was hosted by members Oresta Hamersky and Camilla Huk Maisier in Fort Lauderdale. The film is being produced by the renowned Polish film maker Agnieszka Holland and is funded through grants from Poland, England, Scotland and Ukraine as well as Canadian philanthropist James C. Temerty.

The film’s screenwriter, Andrea Chalupa, shared with the audience her story of inspiration which began with the memoirs of her grandfather, a Holodomor survivor from the Donbas, as well as her research into George Orwell’s “Animal Farm” and its connection to Ihor Sevcenko’s request to translate Orwell’s work into Ukrainian. This was the first translation of Orwell’s book into another language other than English.

Ms. Chalupa was gifted with an original copy of Orwell’s translation from her uncle’s book collection, and the story intrigued her to such an extent that she wrote a book titled “Orwell and the Refugees: The Untold Story of Animal Farm.” It was from this series of events that the seeds of a film were planted.

An informative question and answer session followed the film trailer. Ms. Chalupa captivated the audience with her explanation of the components that went into the making of this film, which is of such historical importance to Ukrainians. Ukrainians are encouraged to make every effort to see the film and to plan promotional activities in their own communities.

The evening provided a fitting conclusion to the series of events commemorating the 85th anniversary of Holodomor in south Florida.

“Gareth Jones” is to be released in Europe in early 2019 with the North American release to follow sometime in the fall. In order to broaden the reach of the film and knowledge of the Holodomor in general, Ms. Chalupa is creating a follow-on graphic novel and school curriculum as well.