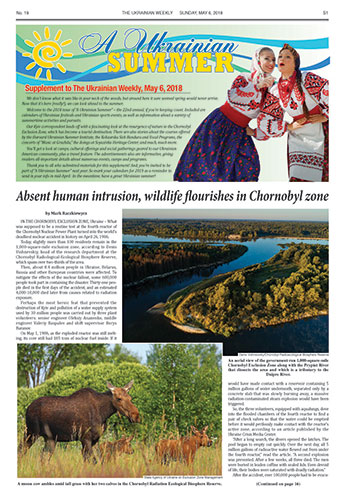 Eighty-five years – that’s the anniversary The Ukrainian Weekly marked in 2018. As we wrote in our editorial on that occasion, it was “a significant milestone in the history of a newspaper that has honorably, reliably and steadfastly served the Ukrainian community here in North America and Ukrainians worldwide.”

Underscored in the editorial was this: “The Ukrainian Weekly has been published continuously since its first issue rolled off the presses in Jersey City, N.J., on October 6, 1933 – the result of a wise decision made by the Ukrainian National Association to offer this fraternal benefit in addition to the Ukrainian-language newspaper Svoboda (then a daily). The two newspapers are among the most important contributions that our publisher, the UNA, has made to its members and the entire Ukrainian diaspora.”

Our anniversary issue published on October 7 also featured some historic gems from The Weekly’s past, bookended by an article from The Weekly’s inaugural issue (October 6, 1933) and a commentary by Dr. Myron Kuropas on the occasion of the newspaper’s 80th anniversary (October 6, 2013). The front page carried a greeting from UNA President/Chief Executive Officer Stefan Kaczaraj, who offered best wishes on behalf of the UNA Executive Committee and the General Assembly.

In subsequent issues, we were happy to publish greetings from the Ukrainian Congress Committee of America, in the form of a half-page advertisement, and a full-page ad from the UNA General Assembly that hailed both The Weekly and Svoboda for their “excellence and commitment to the Ukrainian community in North America.”

A month earlier, in its September 9 issue, The Weekly paid tribute to its sister publication, Svoboda, which was marking its 125th anniversary. The oldest continuously published Ukrainian-language newspaper in the world, the first issue of Svoboda came out on September 15, 1893. It was Svoboda that gave birth to the Ukrainian National Association – a fact that many either do not know, or have forgotten. In its fourth issue, dated November 1, 1893, Svoboda called for the establishment of a “national organization”; that national organization, founded on February 22, 1894, is the UNA. Our editorial pointed out: “A newspaper whose existence encompasses three centuries – the 19th, the 20th and now the 21st, Svoboda has served four waves of immigration to this country and has touched the lives of six generations. It has undergone various transformations – from a biweekly newspaper, to a weekly, then a daily and today once again a weekly; its format has changed from a tabloid-size paper to a broadsheet and back to tabloid – but its mission has remained the same: ‘to serve as the people’s newspaper,’ as was pledged in its inaugural issue 125 years ago.”

Other editorials in 2018 noted the 100th anniversary of Ukrainian statehood, that is, the centennial of the historic Fourth Universal issued by the Central Rada, the parliament of Ukraine in 1917-1918. The editorial of February 11 cited the words of Prof. Serhii Plokhy of Harvard University who had underscored to Radio Svoboda that “the intellectual roots” of the Ukrainian state proclaimed in 1991 are found in January 1918, “and this intellectual impetus remained throughout the entire 20th century.” Our annual editorial for Ukraine’s Independence Day – in 2018 it appeared in the August 26 issue – recounted the developments, both good and bad, as our ancestral homeland celebrated the 27th anniversary of the re-establishment of its independence. That celebration, to be sure, was marred by the reality of Russia’s multi-pronged war on Ukraine and its people.

Two editorials were written to pay tribute to American leaders who passed away in 2018. On September 2 we honored Sen. John McCain, a great friend and supporter of Ukraine, whose appearance on the Maidan in Kyiv on December 15, 2013, will always be gratefully remembered by Ukrainians around the world. Likewise, we will recall his New Year’s Eve visit with President Petro Poroshenko and U.S. Ambassador to Ukraine Marie Yovanovitch to the frontlines in Ukraine’s east, where he told Ukrainian soldiers : “I send the message from the American people – we are with you, your fight is our fight, and we will win together.” President George H.W. Bush was the subject of our December 9 editorial. While noting his “Chicken Kiev” speech in the Ukrainian capital in 1991, we also reminded readers of his contacts with our community through the years, as head of the Republican National Committee, as U.S. vice-president and especially as president, when, just four days before Ukraine’s historic December 1, 1991, referendum on independence, President Bush met with Ukrainian American community leaders and assured them the U.S. would recognize Ukraine’s independence after the vote. It was on his watch that the U.S. recognized the independence of Ukraine on Christmas Day 1991 and on January 23, 1992, that official diplomatic relations were established on January 23, 1992.

Still other noteworthy editorials cited the significance of our Ukrainian credit unions, which we called the “mainstays of our community” (March 25); hailed the graduates in our community, especially the “maturanty” – those students who successfully completed the Ukrainian studies program of our Ukrainian Saturday school system (June 10); and focused on various aspects of remembering and disseminating awareness of the Holodomor (April 8, September 16, September 23 and December 16) – a fitting topic during the Famine-Genocide’s 85th anniversary.

Some editorials dealt with matters related to this newspaper. Thus, on April 15 we thanked our supporters – benefactors, subscribers and advertisers – for making it possible for The Weekly to continue the mission set by its founders: keeping our Ukrainian “hromada” informed and in touch, as well as informing others about Ukraine and Ukrainians. The October 14 editorial, titled “It’s that time of year…” reminded readers, at a time when Ukrainian community life was in full swing after the summer months, that this newspaper welcomes news from Ukrainian communities wherever they may be. The editorial offered helpful hints on how best to communicate with us and ensure that your submissions are published. (For a refresher, go to www.ukrweekly.com and look for the issue dated October 14, 2018.)

On the topic of supporters, we must take advantage of this opportunity to report on the robust contributions to The Ukrainian Weekly Press Fund. During 2018, we were fortunate to receive a total of $24,048 in donations to the press fund. Another $2,545 came to us via the UNA’s annual Christmas Card Project, for a grand total of $26,593. Thank you all for your generosity, which goes a long way to make our work here possible.

On Facebook, the number of folks who liked our page grew from 9,873 as of December 31, 2017, to 10,516 exactly a year later. We kindly remind readers that what we do on Facebook is very different from what we offer on the pages of our newspaper. On Facebook, The Weekly shares links to interesting stories from a variety of sources, lets our friends know when a new issue becomes available online and allows visitors to take a look at our latest front page. So, please continue subscribing and giving gift subscriptions, and please like us on Facebook!

If you’ve read the previous sections in our four-part “2018: The Year in Review,” you certainly are aware of the great variety of news that was covered and features that were published in The Weekly during the year. Ergo, no need to go over that territory. However, there were some other noteworthy offerings on our pages.

Special issues during the years included our four-part “2017: The Year in Review,” published in January-February; Ukrainian Independence Day issues in August; the full-color, 24-page supplement “A Ukrainian Summer” in the first issue of May; and the eight-page section devoted to Ukrainian Debutante Balls in March.

New this year on our pages is a column, “From Far and Wide,” by a Canadian colleague, Marco Levytsky, former editor and publisher of the Edmonton-based Ukrainian News. That newspaper merged in August 2017 with the Toronto-based New Pathway, forming New Pathway – Ukrainian News, which Mr. Levytsky serves as western bureau chief and national affairs editor. His first column appeared in our July 1-July 8 issue.

A columnist added to The Weekly’s ranks in 2017, Orest Deychakiwsky, not only continued to write his monthly commentaries, but also contributed a significant two-part analysis titled “Ukraine in Congress: A century of U.S. congressional support for Ukraine.” It was published on October 21 and October 28.

Weekly Editor Matthew Dubas contributed a variety of news stories during 2018, ranging from articles on Church matters to sports. He is also responsible for the feature on our editorial page called “Turning the pages back…,” each week finding interesting and relevant topics that tie in to current events.

In Kyiv, our colleague Mark Raczkiewycz continued his exceptional work. And, he reported not only from Ukraine’s capital but also from Vorokhta in Ukraine’s west and Mariupol and Berdyansk in the east.

The artful design touches of Stefan Slutsky are evident in each and every issue of the newspaper. Ihor Pylypchuk, is not only Svoboda’s layout artist, but also the webmaster and digital archivist for the UNA’s two newspapers. Mr. Slutsky also happens to be a nationally ranked orienteer – second in the United States in his age bracket. In July he competed in the World Masters Orienteering Championships in Denmark, as well as many other meets here in the U.S throughout the year, winning two bronze medals in North American Championships.

Our part-time editorial assistant Christine Syzonenko, who does proofreading and writing, is also a wonderful photographer whose photos have graced The Weekly’s pages.

We’re extremely lucky to have this team, and the results of our teamwork are evident in each issue of The Ukrainian Weekly.

As the articles in this yearender were prepared based on stories that were published in The Weekly, the sections are not credited to a particular author. The materials used were articles written by our staffers and regular correspondents, news sources like RFE/RL and Eurasia Daily Monitor, and submissions by local community activists. Thank you one and all!