2018: Ukrainian National Association: Moving ahead in a convention year 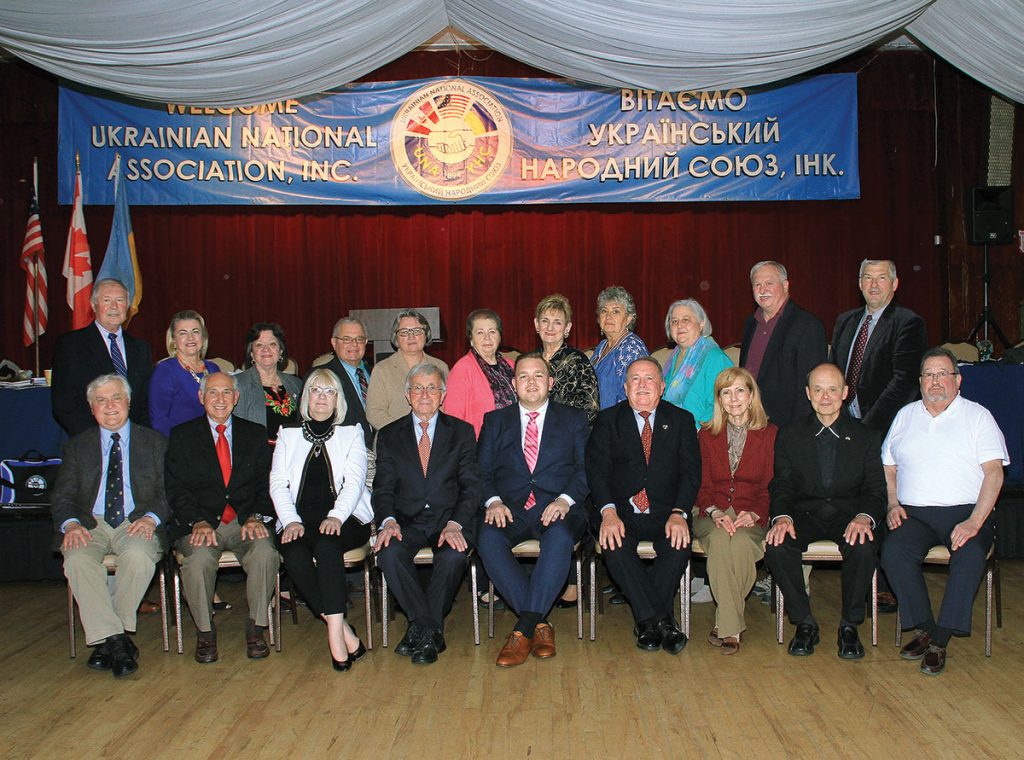 Michael Gold/The Corporate Image
The new General Assembly of the Ukrainian National Association that was elected at the 39th Regular Convention held on May 18-20 at Soyuzivka Heritage Center.

Convention preparations were already in the works at the Ukrainian National Association as 2018 began. This newspaper’s second issue of the year, dated January 14, carried the official announcement that the 39th Regular Convention of the Ukrainian National Association would be held at Soyuzivka Heritage Center in Kerhonkson, N.Y., from Friday, May 18, through Sunday, May 20. The announcement spelled out the procedures for electing delegates to the convention from the UNA’s branches across North America.

On February 18, The Weekly paid tribute to the UNA, its publisher, on the occasion of its 124th anniversary and pointed out the importance of the upcoming convention. Our editorial noted: “At the convention, delegates would do well to recall the UNA’s founding principles, presented concisely in its mission statement: ‘In accordance with its charter, the Ukrainian National Association exists: to promote the principles of fraternalism; to preserve the Ukrainian, Ukrainian American and Ukrainian Canadian heritage and culture; and to provide quality financial services and products to its members. As a fraternal insurance society, the Ukrainian National Association reinvests its earnings for the benefit of its members and the Ukrainian community’ With that in mind, delegates will consider resolutions and recommendations for the well-being of the UNA, thus playing a strong part in setting the UNA agenda for the next four-year term and ensuring that it continues to nobly serve our Ukrainian community.”

On April 10, preparations for the 39th UNA Convention continued as the Executive Committee held a special meeting to approve the elected delegates and alternates. The execs also nominated members to the Credentials Committee, Committee on Revision of By-Laws and the Finance Committee. The members of these committees are named from among the elected delegates to the convention. The names of the delegates and alternates, as well as those appointed to serve on convention committees, were published in the April 15 issue of The Weekly. Also published in that issue was the agenda for the three-day convention.

The UNA Almanac for 2018 – the 104th year that this annual volume has been released – was dedicated to the centennial of the Ukrainian Revolution and the establishment of the Ukrainian National Republic. The Ukrainian-language publication’s editor is Petro Chasto, a longtime member of the Svoboda editorial staff who has been in charge of the successful Almanac projects since the year 2000. The Almanac began with a chronicle of the historic events of 1918 and included an article by Mr. Chasto about the year 1918 on the pages of the Svoboda.

The quadrennial convention, the highest governing body of the UNA, was convened on May 18. During its business sessions, delegates reviewed the necessary changes to ensure the UNA’s future and elected a new General Assembly, which comprises executive officers, auditors and advisors.

The convention was conducted by Dr. Wasyl Szeremeta, chairman, and Mr. Skyba, vice-chairman; and Dr. Szul served as the convention parliamentarian. The convention’s keynote speaker was Joseph Annotti, president of the American Fraternal Alliance, the umbrella organization of fraternal benefit societies in the United States and Canada, who underscored that one of the most important trends in the fraternal system is the regulatory emphasis on corporate governance.

President Kaczaraj delivered his “State of the UNA Address” and noted that he was proud to announce significant positive financial results for the period since the previous convention in 2014. Five years of both significant capital surplus and net income growth are evidence of the UNA’s continued success, he said, adding that the UNA continues to thrive thanks to prudent financial management and an adaptable business model.

National Secretary Symczyk highlighted the reasons for choosing the convention theme “Success by Design,” as the UNA’s achievements over the past four years were accomplished following a carefully designed strategic plan. Mr. Symczyk also recalled his journey across the U.S. to visit UNA districts, branches and members. He underscored that the UNA is seeking to partner with other organizations in community events to broaden its membership outreach and increase the UNA’s visibility.

Treasurer Lisovich said there was much good news to report as 2017 was a milestone year for UNA. The UNA’s financial capital surplus, the fiscal bedrock of every insurance company, has more than doubled since the 2014 Convention, to $10.6 million as of December 31, 2017. This is a significant improvement from the $4 million achieved as of 2013 yearend. Not since 1993 has the UNA stood on such a solid financial foundation, she stated.

As a mark of the UNA’s move toward incorporating cutting-edge technology for its business operations, delegates received the convention reports loaded on an Amazon Kindle Fire 7 tablet.

Dr. Szul, chairman of the By-laws Committee, spoke about proposed amendments to the current UNA By-Laws, which foresee a corporate governance structure that replaces the Executive Committee with a Corporate Board of Directors, with the financial competencies and fiduciary responsibility to run insurance operations in accordance with new regulatory mandates. A separate Fraternal Advisory Board is being proposed to handle the fraternal side of the UNA’s activity.

The discussion at the convention concerning the proposed new UNA By-laws also included the important topic of succession planning, both in terms of nominees for election to UNA offices and the filling of vacancies, due to disqualification or disability, death or resignation, on the UNA’s General Assembly.

On the Saturday evening of the convention, a fund-raising gala banquet for Soyuzivka was hosted by the UNA inside the Veselka Hall. During the dinner, the newly elected UNA officers, auditors and advisors took their oaths of office. The banquet’s keynote address was delivered by Andrew Futey, president of the Ukrainian Congress Committee of America, who noted the illustrious history of the UNA since its founding in 1894 in Shamokin, Pa. In the course of its history, he said, the UNA has made lasting impacts and contributions to the community “by publishing two of the most important newspapers in North America – the Ukrainian-language Svoboda and The Ukrainian Weekly in the English language – an outlet that has allowed our community to keep abreast of Ukraine-related news, but even more importantly, to be informed about the work and accomplishments of our organized Ukrainian American community.” Other notable contributions of the UNA cited by Mr. Futey included its role in the formation of the Ukrainian Congress Committee of America in 1940 and the creation of the Ukrainian World Congress (known previously as the World Congress of Free Ukrainians) in 1967. Also noteworthy, he said, was the UNA’s purchase of the property today known as Soyuzivka Heritage Center, which is now owned by the Ukrainian National Foundation.

An interesting feature in The Weekly’s reports about the convention was the commentary elicited by Editor Matthew Dubas from the oldest and youngest delegates: Peter Serba, 94, of Wilmington, Del., who had been to many conventions, and Volodymyr Myshchuk, 22, of Watervliet, N.Y., a first-timer. Mr. Serba commented: “I look forward to the reforms the UNA will enact in order to attract young members and new blood into the organization. … I hope to be here and continue to work with the UNA for as long as I am able.” Mr. Myshchuk offered: “I myself have gained a better understanding of the relationship between the organization and its governance policies. I feel that technology will be a major step forward for the UNA to adapt to new challenges.”

The new General Assembly began its four-year term of office on July 1 and held its first post-convention meeting on October 12-14 at Soyuzivka. An update on the UNA’s finances and activity were delivered by the three executive operating officers of the UNA. Other General Assembly members, as well as the editor-in-chief of Svoboda and The Ukrainian Weekly, submitted brief written reports and had an opportunity to address the meeting. The reports were brief, as some members were newcomers to the General Assembly, while others had recently submitted lengthier reports, covering a four-year period, at the UNA Convention in May. The General Assembly established four standing committees: By-Laws, Financial, Membership Outreach and Publications.

Advisor Puzyk, who chairs the special committee established to plan celebrations of the UNA’s 125th anniversary in 2019, reported that a gala anniversary event is planned in New Jersey, where the UNA is headquartered, and small regional events are being discussed.

The Ukrainian National Foundation’s president, Dr. Szeremeta was welcomed as a special guest during the final session. He took advantage of the opportunity to welcome all and to report on renovations and new projects at Soyuzivka Heritage Center, which is under the aegis of the UNF (an affiliated company of the UNA that performs charitable activities on its behalf).

On July 2, Myron Kolinsky, a licensed professional insurance agent whose work experience includes various positions for numerous credit union associations in Connecticut, was tapped as the UNA’s new national organizer. A story about his appointment noted that he holds an M.B.A. in management and a B.S. in finance from the University of Connecticut, is a longtime member of UNA Branch 277 and serves as Connecticut District Committee chair. Mr. Kolinsky is responsible for enrolling UNA members, organizing regular fraternal events throughout the country, recruiting UNA branch secretaries, promoting the UNA by traveling to various Ukrainian communities and helping to make the UNA nationally recognizable.

The September 9 issue of The Ukrainian Weekly highlighted the UNA’s 2018-1019 scholarship program. Thirty-nine students who are members of the UNA received a total of $10,225 in special and regular scholarships.

During 2018, the UNA continued its series of presentations on wellness for its members and the community at large. In Bridgeport, Conn., on March 18, Dr. Petrusia Kotlar spoke on ethno-nutrition, seasonal eating, nutritional trends in 2018 and alternatives to chemical medicine. The UNA also increased its visibility by making its presence felt at many Ukrainian festivals held during the year. UNA representatives at these events informed the Ukrainian community about UNA insurance products and services, as well as its two highly respected weekly newspapers.

While the UNA marked its 124th anniversary in 2018, its newspapers celebrated significant milestones. The Ukrainian-language Svoboda commemorated its 125th anniversary, while The Ukrainian Weekly observed its 85th. Both papers published anniversary greetings from UNA President Kaczaraj on their front pages.

As Christmastime approached, the UNA unveiled its new set of Christmas cards – the work of artist Andriy Khomyk – and noted that its 2018 Christmas Card Fund-Raiser aimed to support The Ukrainian Weekly/Svoboda Press Fund and Soyuzivka Heritage Center. Donations could also be made to the general fund of the Ukrainian National Foundation, a registered 501(c)(3) charitable organization.

By the end of the year, the UNA, the oldest, largest and strongest Ukrainian fraternal benefit society, was looking ahead to 2019 and the 125th anniversary of its founding on February 22, 1894.