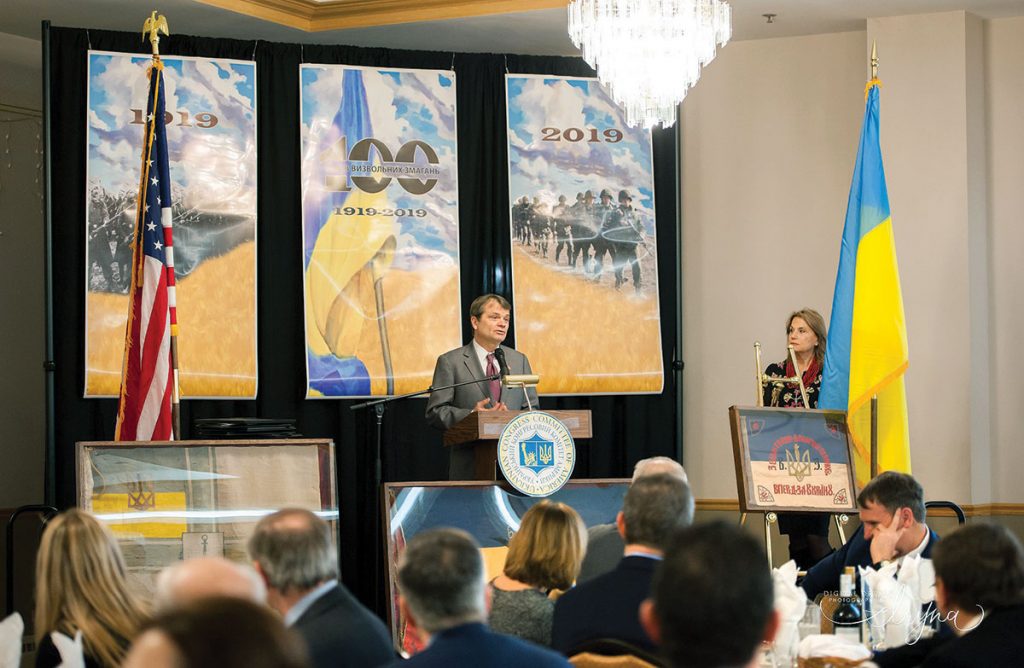 Iryna Yatsyshyn
Rep. Mike Quigley, a new co-chair of the Congressional Ukraine Caucus, addresses the Ukrainian American community gathered on January 20 to celebrate the 100th anniversary of the unification of Ukrainian lands into one independent state in 1919. Looking on is the event’s emcee, Marta Farion.

The commemoration was organized by the Ukrainian Congress Committee of America Illinois Division (UCCA Illinois) and gathered almost 300 members of the community.

Three members of Congress – Rep. Mike Quigley, who recently became a co-chair of the Congressional Ukraine Caucus, Rep. Danny Davis, a long-time friend of the community, and Rep. Sean Casten, recently elected to Congress, were present. All three are Democrats who represent Illinois.

The event was also attended by Consul Ihor Bodnar of the Consulate of Ukraine; Vice-Consul Laura Stange of the Consulate of the Republic of Lithuania; Vice-Consul Piotr Semeniuk of the Consulate of the Republic of Poland, Gina Tunar of Chicagoland Qirim Tatar Organization; Manuel Venegas representing Maria Pappas, Cook County treasurer; Dan Patlak, commissioner, Cook County Board of Review; Saulius Kuprys, president of the Lithuanian American Council and the Joint Baltic American National Committee; Romuald Poplawski of the Polish Congress of America, Illinois Division; Csaba Zongor, president of the Polish-Hungarian World Federation; Henryk Marciniak, chairman of the Road to Peace Foundation; and Andriy Dobriansky, director of communications at the UCCA headquarters in New York.

A special award was presented by the UCCA to Bohdan Watral, former president/CEO of Selfreliance Ukrainian American Federal Credit Union.

Marta Farion, emcee of the event, led the program with informative introductions of each guest and speaker. Excellent presentations were made by Glen Howard, president of the Jamestown Foundation, and Kateryna Smagliy of the McCain Institute.

The choir of Chicago’s Ukrainian American Youth Association closed the event with a medley of patriotic songs. The event was a major success in no small measure due to the efforts of many members of the UCCA board, and Motria Melnyk who created all the graphics.