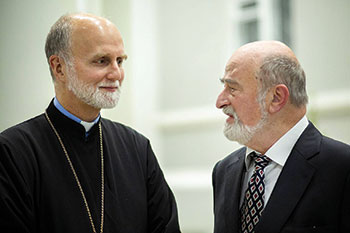 KYIV – The winner of the 2018 Light of Justice Award for moral, spiritual and ethical leadership is Leonid Finberg, sociologist, researcher of culture, director of the Center for Studies of East European Jewish Culture and History (since 2006) and chief editor of Dukh i Litera Publishing House (since 1997).

The festive awards ceremony was held on December 14, 2018, at Taras Shevchenko National Museum in Kyiv. The event was organized by the Institute of Leadership and Management of the Ukrainian Catholic University. The evening’s special guests were the winner of the award in 2012, Larysa Zalyvna, and the UCU’s president, Bishop Borys Gudziak.

The Light of Justice Award was established in 2010 by a Canadian of Ukrainian descent, Anastasia Shkilnyk, and Bishop Borys,  in memory of Anastasia’s father, Dr. Mykhailo Shkilnyk, a lawyer and civil and political activist during the times of the liberation movement in Ukraine, 1917-1920. This award is intended to focus attention on values-based leadership and the importance of moral principles in leadership, and to popularize examples of such leadership in Ukrainian society.

This year the candidates were people who demonstrated moral leadership during the 2014 Revolution of Dignity, and Mr. Finberg, a sociologist, researcher and chief editor of the Dukh i Litera Publishing House, was selected as the laureate.

“We look for people who in daily life give us examples of sacrifice for the building of a democratic society. Because this means being a moral leader today, and what the value of this is a question which today’s event should answer. One thing is clear: these people are for us valuable guideposts; they create islands of a new Ukraine,” said one of the organizers of the Light of Justice Award, Natalia Bordun, director of UCU’s Institute of Leadership and Management.

“Every time has its needs. There are people who are distinguished because of a certain moment, and there are people who work tirelessly and with purpose. Today’s laureate, Leonid Finberg, is a person of systematic and systemic work, who prefers to stay out of the limelight,” noted Bishop Borys. “In my opinion, Leonid Finberg, through his networking, always builds relationships and shows how to consolidate society and bring up themes which society doesn’t see. In the 1990s, Finberg organized many initiatives calling for Ukrainian-Jewish reconciliation. He is also one of the founders of Dukh i Litera Publishing House, which publishes exceptionally important works, which bring into Ukrainian culture things that were forbidden. In this context, literature about the Jewish heritage plays an important role.”

Bishop Borys continued: “In a particular way, the committee wants to honor Leonid Finberg and show society his attitude during the Maidan. As we know, today’s war is a war of bullets, but not only. It is an information war. When the new political nation of Ukrainians showed that it was achieving new maturity, there were attempts to suffocate this movement, casting the shadow of anti-Semitism upon it. At that time, Finberg, together with other Jewish patriots, conducted systematic activity, explaining to the world that Jews were also on the Maidan and also suffering for Ukraine. Such an enduring presence on the front is an example of great courage.”

The evening’s most-awaited moment was the inaugural speech of the laureate himself.

“We don’t notice how things have changed, because we compare our lives with that in other countries. It is necessary to compare ourselves today with ourselves yesterday,” noted Mr. Finberg.

“Ukrainian cinematography is undergoing a rebirth that is becoming famous in the world. Ukrainian theaters and important cultural institutions are opening. And fantastic changes are happening in Ukraine’s book market. We have seen the appearance of a true philosophy library, composed of such representatives as Andrii Baumeister, Oleh Khoma… A history library has been born, which shatters the myths of Soviet historiography. Jewish studies are developing. The clear domination of Ukrainian humanities and Ukrainian literature is happening – and consumers more and more often buy Ukrainian translations. A separate victory is Ukrainian children’s literature, where individual works are published in the hundreds of thousands,” he related.

“Still other positive changes: the fact that students receive unique opportunities for internships at foreign universities. I think they cannot imagine that their parents did not even have a chance to leave the country,” Mr. Finberg noted. “There are many impressive shifts and they give us the strength to overcome difficulties which no one, except we, will resolve. …personal responsibility is decisive in solving Ukraine’s problems. It’s necessary to create strong intellectual centers that will tell the government how to move and make the right decisions. The new generation already should have a key role in this.”