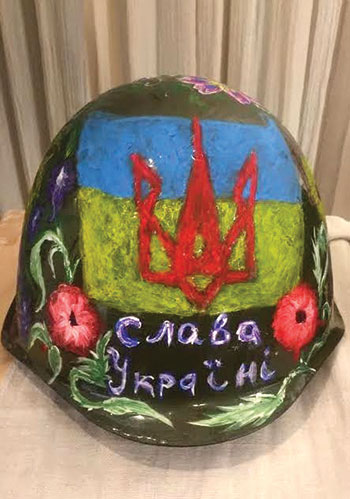 Ihor Bodnar
A helmet from the Euro-Maidan Revolution of Dignity was on view as part of the commemoration “Heroes Do Not Die.”

CHICAGO – Chicagoans commemorated the fifth anniversary of Ukraine’s Euro-Maidan, honoring the Heavenly Hundred who sacrificed their lives for the independence of Ukraine. Around 200 people came on February 22 to pay their respects to the fallen heroes. “Heroes Do Not Die,” was organized by the Consulate General of Ukraine in Chicago, Ukrainian Congress Committee of America – Illinois Division and the Ukrainian National Museum.

Then, drumbeats summoned everyone to step outside for the candlelight vigil led by Bishop Venedykt Aleksiychuk of St. Nicholas Ukrainian Catholic Eparchy. People came together to offer their prayers for family, friends and fellow citizens who lost their lives during the Revolution of Dignity. Bishop Venedykt recalled the tragedy of these events; he reminded all that “prayer is the life which the heroes left us. Every one of us is a hero of the Maidan, and the Revolution should always be a part of us.”

In total silence, with a cup of tea and a heavy heart, all 200 returned back to the museum to continue with the commemoration. The film “Infinite Tales – Nebesna Sotnya” was projected onto the screen, followed by Maria Dziuma’s slide presentation of the Euro-Maidan events, as well as Chicago’s support campaign.

Lydia Tkaczuk, president of the Ukrainian National Museum, made introductory remarks and spoke about photojournalist Hurniak and his photos of the Maidan. Hurniak was an Aidar battalion soldier who lost his life while protecting his country’s freedom and transporting a wounded soldier. His photographs of the Revolution of Dignity were donated to the Ukrainian National Museum in 2015 by his wife, Iryna Hurniak.

Consul General Larysa Gerasko gave her first-hand account of the Revolution in Kyiv, while the president of the UCCA Illinois Division, Ihor Diaczun, recalled the many non-Ukrainians who took part in the revolution.

Their recollections were interspersed by the performances of bandurists Ivan Shmilo and Lesia Klimchenko and philharmonic orchestra singer Olha Feniuk from Lviv. Volodymyr Zuyenko and Dmytro Petruk recounted their own experiences at the Euro-Maidan. Mr. Petruk was only 17 when he took part in the revolution that caused him to lose an eye because of a sniper’s shot. He said, “I made a choice that day, one I will never regret.” Afterwards, the Rev. Yaroslaw Mendiuk gave an optimistic outlook on the events of five years ago – one that expressed faith in the Revolution of Dignity.

As the formal part of the commemoration came to a close, people lingered, viewed the Hurniak photo exhibition and reminisced about how each one of them followed the events of the Euro-Maidan and how a peaceful protest led to a revolution in Ukraine.